Interestingly, The Ruling BJP Had Already Opened Its Account In The Assembly Poll By Winning Three Seats Unopposed.

The counting of votes for 57 of the 60 Assembly seats in Arunachal Pradesh has taken up on May 23, along with the 542 Lok Sabha constituencies across India. Around 7 lakh voters have exercised their franchise to decide the fate of 181 candidates, including 11 women, who locked horns in 57 assembly segments across the state. While the BJP has fielded its candidates in 57 Assembly seats, the Congress is contesting only in 46. Talking about other regional players, the NPP, JDU, JDS, PPA and All India Party (AIP) are fighting in 30, 15, 12, 9 and one assembly seats respectively. There are also 11 Independent in the fray for the Assembly polls in the state, which had 281 vulnerable booths and 662 critical stations during the poll. Security personnel were deployed in large number to avoid any untoward incidents across the state. For the first time, Voter Verifiable Paper Audit Trail (VVPAT) was used along with electronic voting machines in all the polling stations.

10:31 pm: While Janata Dal United (JD-U) made its debut in the state with six seats, the opposition Congress has won three. Independent candidates have won two seats, the NPP and the PPA one each.

10:19 pm: Arunachal Pradesh Chief Minister Pema Khandu won from the Mukto assembly constituency for the third consecutive time, defeating his lone rival Thupten Kunphen of the Congress by a margin of 2,602 votes. 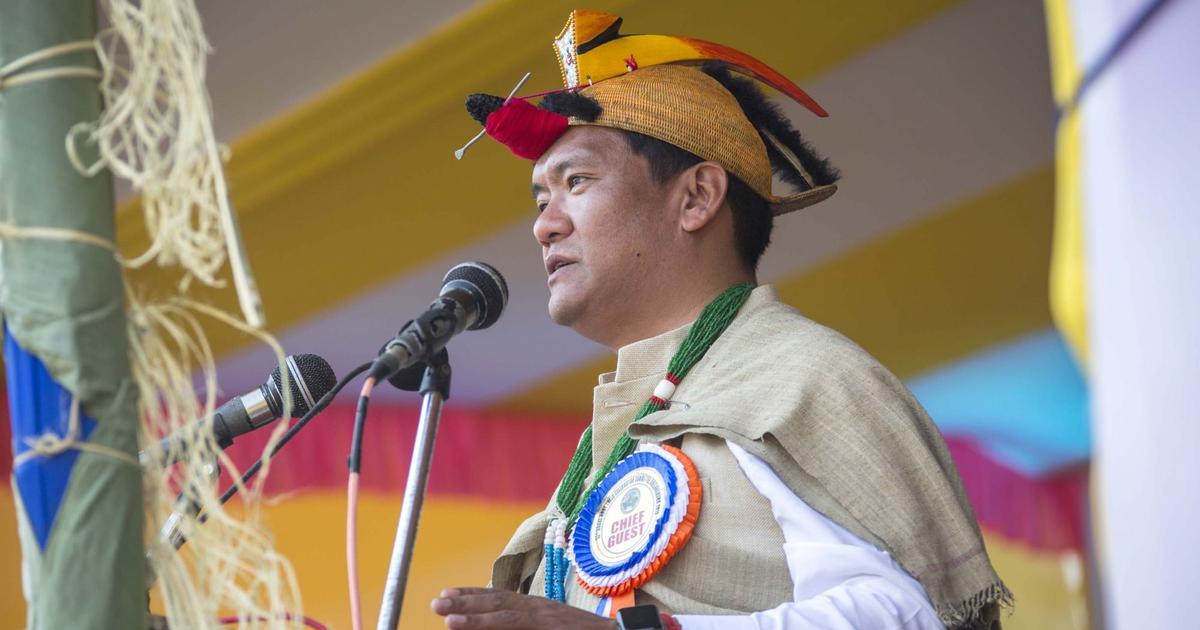 07:57 pm: The BJP registered win in 19 Assembly constituencies and leading in 7 segments.

07:40 pm: The BJP has grabbed 18 Assembly constituencies in the state and leading in 8 segments.

07:13 pm: The Bharatiya Janata Party (BJP) is set to repeat its victory march. Emerged victorious in 16 Assembly seats, leading in 11 constituencies. The Janata Dal-United (JD-U), the Congress and the Independent bagged 4, 3 and 1 Assembly segments respectively.

06:34 pm: The ruling BJP in Arunachal Pradesh is moving ahead with wins in 10 out of the 13 assembly seats results, which were declared so far Thursday.

05:32 pm: The Janata Dal United and an Independent candidate won one seat each.

05:23 pm: The ruling BJP in Arunachal Pradesh won seven Assembly seats and is leading in 11 constituencies, according to the latest trend.

03:00 pm: Deputy Chief Minister Chowna Mein won the Chowkham seat defeating his nearest Congress rival Khunang Kri by 7,291 votes. The deputy chief minister who had won from the Lekang constituency in Namsai district for the last five consecutive terms since 1995 but this time contested from the Chowkham seat.

02:33 pm: PHE Minister Wangki Lowang (BJP) retained the Namsang seat in a multi-cornered contest, by defeating his nearest rival Ngonglin Boi of the NPP by a margin of 1682 votes.While Lowang polled 3,202 votes Boi could manage 1,520 votes.

02:15 pm: Tana Hali Tara of the BJP won from Doimukh constituency defeating his nearest rival Nabam Vivek of the National Peoples Party (NPP) by 2, 385 votes. BJP retained the seat as in 2014, Nabam Rebia of BJP had won from the seat.

01:57 pm: In the Itanagar constituency, Janata Dal United candidate Techi Kaso won by a slender margin of 302 votes in a multi-cornered contest, defeating his nearest rival Kipa Babu of the BJP. Kaso who retained the seat, polled 12,162 votes while Babu polled 11, 860 votes.

01:41 pm: First timer Goruk Pordung of the BJP won the Bameng Assembly seat defeating Home Minister Kumar Waii of the NPP by a margin of 393 votes.

01:40 pm: Sitting MLA from Lumla constituency in Tawang district Jambhi Tashi of BJP was re-elected by defeating his lone rival Jampa Thirnly Kunkhap of the Congress by a margin of 1,288 votes. While Tashi polled 4567 votes, Kunkhap could poll 3279 votes.

01:33 pm: Sitting BJP MLA from Nari Koyu constituency Kento Rina retained the seat by defeating his nearest rival Tojir Kadu of the Congress by a margin of 216 votes in a triangular contest.

01:29 pm: In the un-reserved Bordumsa-Diyun seat in Changlang district, Independent candidate Somlung Mossang tasted victory by defeating his nearest rival Jawra Maio of the BJP by a margin of 2,379 votes.

01:23 pm: BJP is leading in thirteen out of 57 Assembly seats in Arunachal Pradesh, while the JD(U) is ahead in three seats, according to the latest trend.

12:44 pm: The Deputy Chief Minister and Chowna Mein leads in Chowkham by 5289 votes, while INC's Khunang Kri of the INC is trailing.

11:44 am: Techi Kaso of Janata Dal (United) is leading in the Itanagar constituency. Kipa Babu of BJP is trailing him by 580 votes. Kaso, the incumbent Member of Legislative Assembly from Itanagar was elected in 2014 for INC and in 2009 for NCP.

11:43 am: Three BJP candidates, Kento Jini (Along East constituency), Taba Tedir (Yachuli constituency) and Phurpa Tsering (Dirang constituency) were declared elected unopposed by the Election Commission in March, after the last day of withdrawal of nominations.

This followed the rejection of "defective" nomination papers of opponents in the first two constituencies and withdrawal of candidature in the third.

10:46 am: Jawra Maio is leading in Bordumsa-Diyun constituency by 301. Independent candidate Somlung Mossang is trailing him.

The law professional along with over 1000 supporters joined the BJP in January. Khachang Maio, Jawra Miao's brother and general-secretary of Bordumsa-Diyun Mandal committee of the BJP resigned in April to support Mossang's campaign.

10:45 am: Dasanglu Pul of BJP, wife of late Kalikho Pul is leading by 101 votes in Hayuliang Assembly segment. Lupalum Kri of INC is trailing her.

After her husband's death, Ms. Pul rode the sympathy wave to win the November 2016 by-election from the same constituency, which had elected her husband in all Assembly elections from 1995 to 2014. She had defeated Yompi Kri, Mr. Lupalum's wife.

09:52 am: BJP's Kiren Rijiju, the Union Minister of State for Home Affairs is leading with a margin of 3847 in Arunachal West constituency. Jarjum Ete of JD(S) is trailing him. Nabum Tuki, the former Chief Minister has registered 2.11 per cent of the votes counted. 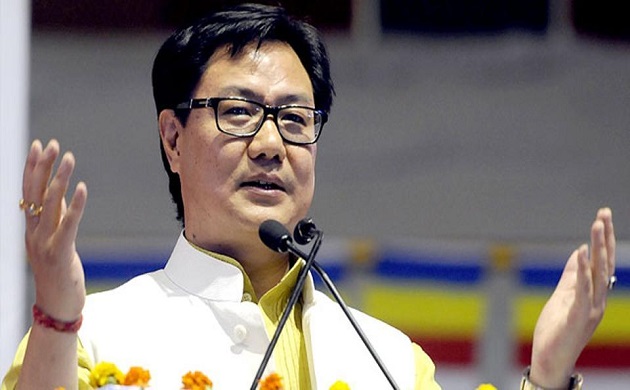 09:51 am: Tapir Gao, Arunachal Pradesh BJP president is leading in Arunachal East by a margin of 614 votes. C. C. Singpho, an independent candidate is trailing him. Lowangcha Wanglat of Congress gets 4.54 per cent of the total votes counted so far.

06:49 am: The elections for Arunachal Pradesh Assembly and parliamentary constituencies were held simultaneously on April 11, during the first phase of Lok Sabha elections.

06:47 am: Arunachal Assembly election is a three-concerned fight among the BJP, the Congress and the National People’s Party (NPP).

06:41 am: The winners are Kento Jini from Along East constituency in West Siang district, Taba Tedir from Yachuli seat in Lower Subansiri district and Phurpa Tsering from Dirang seat in West Kameng district.

06:40 am: Interestingly, the ruling BJP had already opened its account in the assembly poll by winning three seats unopposed.