The Bharatiya Janata Party (BJP) on Thursday released the candidate list for the upcoming Assembly elections in Arunachal Pradesh and Sikkim. The polls will be held simultaneously with the Lok Sabha polls. The BJP has announced six names for Arunachal Pradesh and 12 for Sikkim. The party is also expected to release the first list of candidates for the Lok Sabha Elections 2019 tomorrow. BJP's highest decision-making body, met on Wednesday on selection of candidates. The party has met for the third time in last six days. On Tuesday evening, it had held a seven-hour-long discussion to deliberate upon the names of party's candidates in various states. Another meeting of the BJP’s election committee has been called on March 22 to discuss various names. 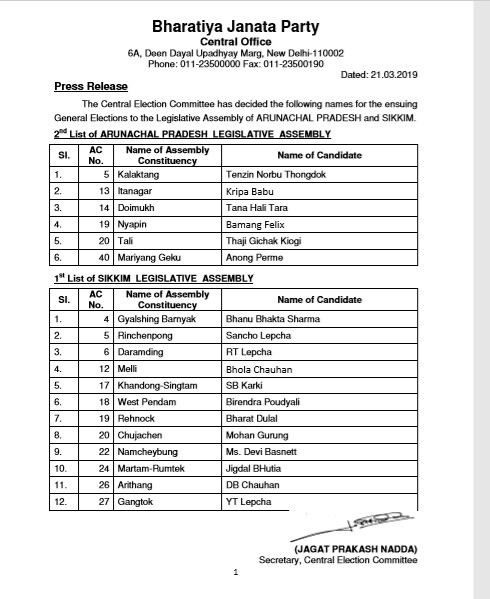 The Lok Sabha Elections 2019 will be held in seven phases, starting from April 11, while the results of all the phases will be declared on May 23. Announcing the seven-phase schedule for 2019 Lok Sabha polls, Chief Election Commissioner Sunil Arora also said 10 lakh polling stations would be set up this time as against about nine lakhs in 2014.

In the first phase, 91 constituencies will go for polls, 97 constituencies in the second phase, 115 constituencies in the third, 71 in the fourth phase, 51 in the fifth phase, 59 in the sixth phase and 59 in the seventh phase. In the first phase, the polling will be held in Andhra Pradesh, Arunachal Pradesh, Goa, Gujarat, Haryana, Himachal Pradesh, Kerala, Meghalaya, Mizoram, Nagaland, Punjab, Sikkim, Telangana, Tamil Nadu, Andaman and Nicobar, Dadra and Nagar Haveli, Daman and Diu, Lakshadweep, Delhi, Puducherry, Chandigarh, Uttarakhand.