The Delhi Election Results Of 2020 Is Seeing The Aam Aadmi Party (AAP) Consolidate On Their Early Leads And They Look Set To Comeback To Power As The Bharatiya Janata Party (BJP) Failed To Deliver.

Gautam Gambhir, the former cricketer and BJP MP from East Delhi, has admitted that the Bharatiya Janata Party has plenty of work to do after the Delhi Election Results saw the Aam Aadmi Party (AAP) consolidating on their early leads and looking set to comeback to power following the Delhi Assembly Elections on Tuesday. Arvind Kejriwal's party, based on the official Election Commission of India trends, are currently ahead in over 50 seats out of the 70 in the Delhi Assembly with the BJP just managing a figure of over 10. Speaking to ANI, Gambhir said, "There is a lot of work left to be done in Delhi. However, we are committed to the path of development in Delhi as envisaged by Prime Minister Narendra Modi. We accept the Delhi Election Results and congratulate Arvind Kejriwal (as well as) the people of Delhi. We tried our best but, probably, we could not convince the people of the state. I hope Delhi develops under the chief ministership of Arvind Kejriwal." The ongoing election results has seen some twists and turns.

Kejriwal is currently leading from the New Delhi Assembly seat but Manish Sisodia, the deputy Chief Minister and the one who set out to revolutionise Delhi's schooling, is currently trailing in Patparganj. However, Okhla constituency, which has been a hotbed during the course of the elections due to the Shaheen Bagh protests and the violence which gripped Jamia in the wake of the anti-CAA protests, is currently seeing AAP MLA Amanatullah Khan leading by a big margin.

Celebrations broke out at the AAP headquarters here as early vote-counting trends for the Delhi Assembly Elections showed a comfortable victory. The headquarters were decorated with blue and white balloons and big cut-outs of Kejriwal were placed in different parts of the party office. "We knew it. We have changed the politics of this country. Now it is Delhi, next is India," said Sanjeev Singh, a party volunteer from Hari Nagar. Another volunteer Fareen Khan said, "We hope we get such a clear majority that a message goes out that doing Hindu-Muslim politics will not work anymore." 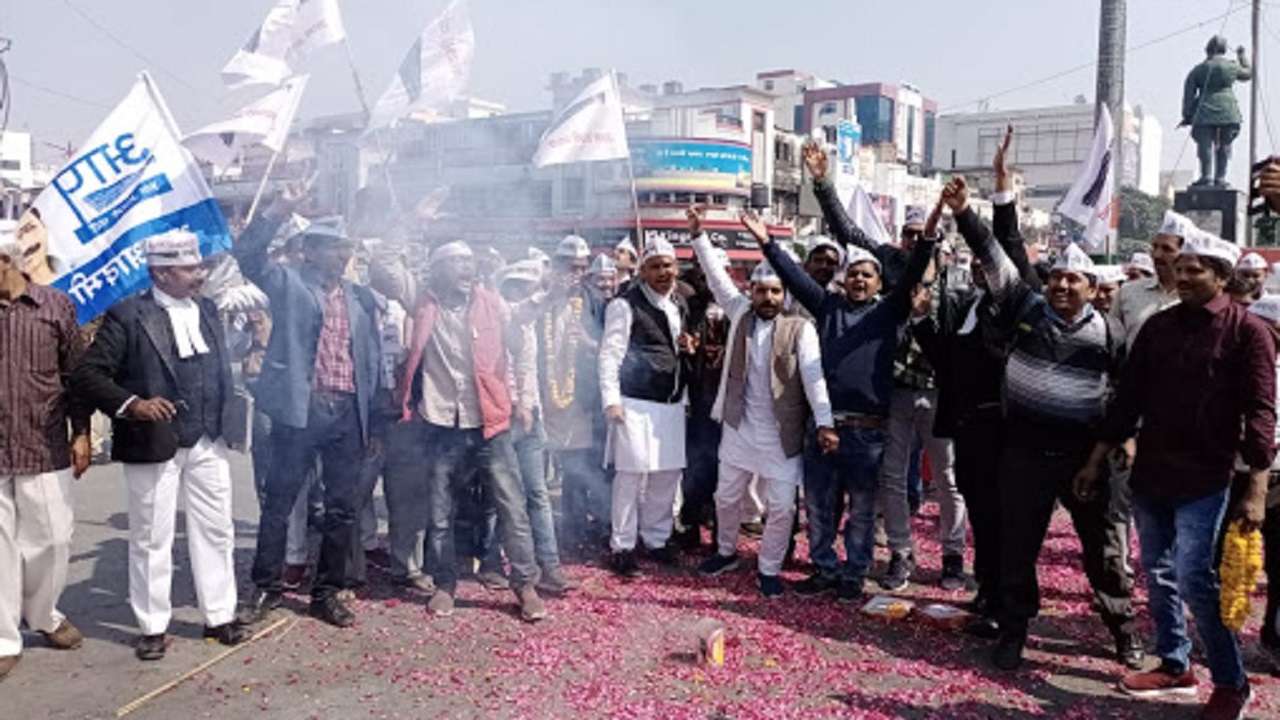 AAP is all set to come back to power as they dominated the Delhi Assembly Elections. (Image credit: News Nation)

The exit polls had predicted a big win for the ruling AAP even as BJP leaders maintained that the surveys will fall flat. Strong rooms spread across the city storing the EVMs are being heavily guarded, with a "three-layer security ring", Delhi CEO Ranbir Singh told PTI. "The postal ballots will be counted first till 8.30 am and then the votes cast through EVMs will be counted," he said. The inner-most security layer, near the strong rooms, is that of the paramilitary, followed by armed policemen and then police personnel forming the outermost layer, he added.

Tight security arrangements have also been put in place at various centres across the national capital. The election, largely seen as a battle between the AAP and the Bharatiya Janata Party, which went aggressive during the high-octane campaign was held on Saturday, sealing the fate of 672 candidates - 593 men and 79 women.