The Nationalist Congress Party (NCP) On Tuesday Released The List Of Seven Candidates For The Upcoming Delhi Assembly Polls.

The Nationalist Congress Party (NCP) on Tuesday released the list of seven candidates for the upcoming Delhi Assembly Polls. According to the list announced by the party, Aam Aadmi Party sitting MLA Commando Surender Singh, who recently resigned from the party, will contest from Delhi Cantt. Earlier today, the Indian National Congress released its third list of five candidates for the February 8 Delhi assembly elections, fielding former Rajya Sabha member Parvez Hashmi from the Okhla constituency. 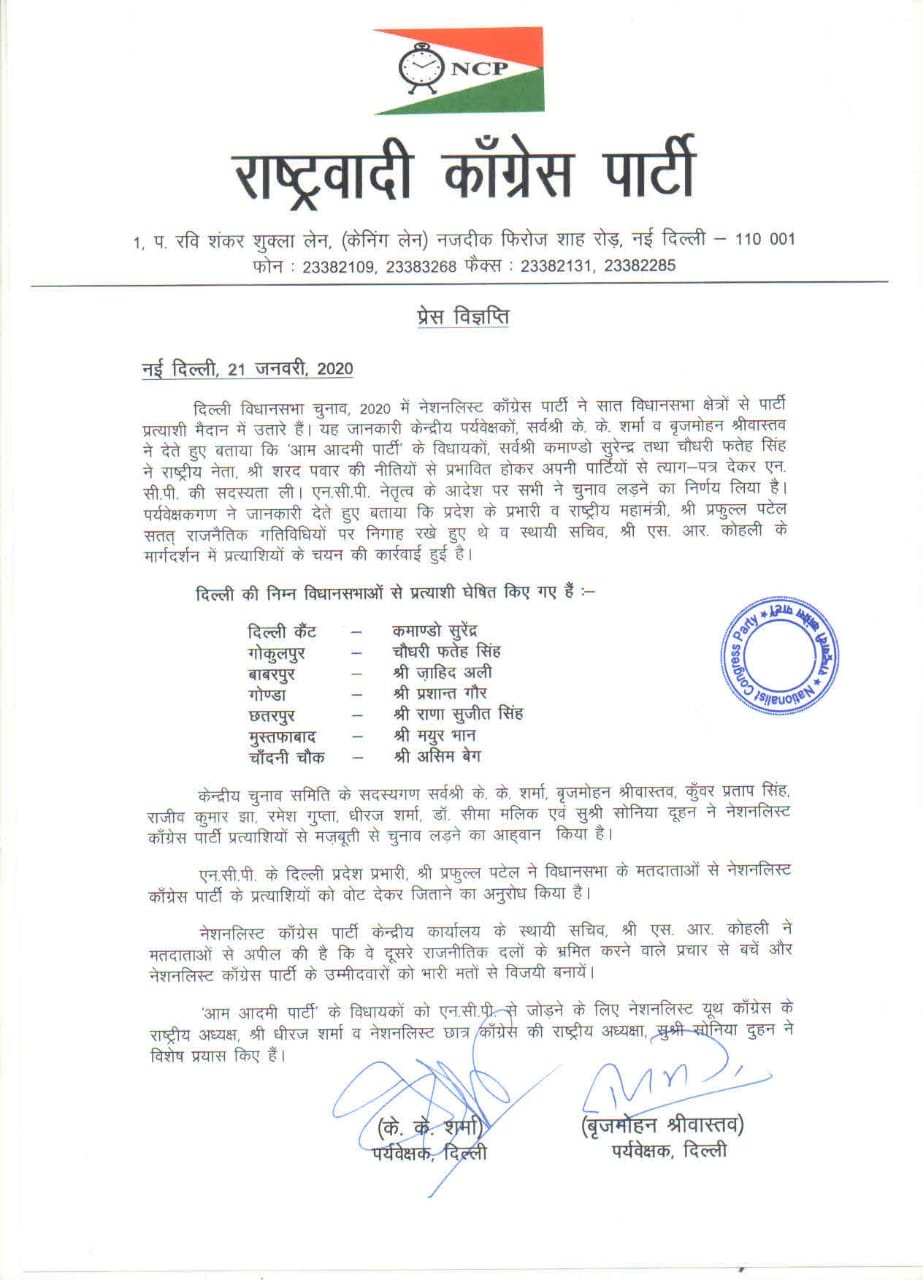 Former Congress MLA Mukesh Sharma is the party's nominee from the Vikaspuri seat. The party has fielded Mohinder Chaudhary from the Mehrauli assembly seat, Parveen Rana from Bijwasan and Jai Prakash Panwar from the Madipur (SC) seat.

The Congress has announced names of 66 candidates so far for the election to the 70-member Delhi assembly and it is likely to leave four seats for its ally RJD.  The BJP on Tuesday released the second list of candidates for the Delhi Assembly polls, fielding state Yuva Morcha President Sunil Yadav from the New Delhi constituency against Chief Minister Arvind Kejriwal.

The list was announced after midnight following the announcement of Siromani Akali Dal (SAD) to not contest the Delhi polls in alliance with the BJP due to its stand on the Citizenship Amendment Act.

According to the list of 10 candidates that came hours before the filing of nomination closes on Tuesday, Delhi BJP spokesperson Tajinderpal Singh Bagga has been fielded from Hari Nagar and party’s Purvanchal Morcha president Manish Singh would contest from the Delhi Cantonment constituency.

The BJP announced its candidates on all four seats that traditionally went to its ally SAD in the previous Assembly elections in Delhi. Dharamvir Singh has been fielded from Kalkaji, former East Delhi deputy mayor Sanjay Goyal from Shahdara and Ramesh Khanma from Rajouri Garden.

The list also includes the names of BJP candidates Sumanlata Shokeen, who would content from Nangloi Jat, Ravindra Chaudhary from Kasturba Nagar, Kusum Khatri from Mehrauli and Anil Goyal from Krishna Nagar.

The BJP has left three seats for its alliance partners JD(U) and Lok Janshakti Party (LJP). The JD(U) will contest from Burari and Sangam Vihar constituencies while LJP will fight from the Seemapuri seat.