Delhi Assembly Election Results 2020: Welcome to News Nation’s LIVE Blog on Delhi Assembly Elections Results. The counting for the 70 constituencies will begin at 8 am. The election, largely seen as a battle between the AAP and the Bharatiya Janata Party, which went aggressive during the high-octane campaign was held on Saturday, sealing the fate of 672 candidates -- 593 men and 79 women. Early trends will start coming in from 10 am onwards. The Aam Aadmi Party (AAP) led by Arvind Kejriwal hopes to return to power in Delhi. Almost all exit polls have predicted the incumbent AAP for continuing its stay in office. The BJP, however, would expect to end its ‘vanvaas’ and make a grand comeback. This Assembly Elections saw a moderate voting turnout of 62.59 per cent. Minority-dominated areas saw brisk voting.

Here are the highlights of Delhi Election 2020 Results:

Delhi Congress chief Subhash Chopra on Tuesday resigned from his post, taking moral responsibility for the party's debacle in the Assembly polls. The Congress drew a blank for the second time in a row and reduced its vote share from 9.7 percent in 2015 to 4.27 percent this time.

The Election Commission has declared Arvind Kejriwal the winner of the New Delhi seat. He won the seat by 21,697 votes.

The Election Commission has declared Arvind Kejriwal the winner of the New Delhi seat.

"Congratulations to AAP and Shri @ArvindKejriwal Ji for the victory in the Delhi Assembly Elections. Wishing them the very best in fulfilling the aspirations of the people of Delhi," says Narendra Modi.

Congratulations to AAP and Shri @ArvindKejriwal Ji for the victory in the Delhi Assembly Elections. Wishing them the very best in fulfilling the aspirations of the people of Delhi.

The Aam Aadmi Party (AAP) crossed the halfway mark in the 70-member Delhi Legislative Assembly, winning 36 seats and was leading in 26 seats, according to Election Commission figures. Among those who registered victory are Chief Minister Arvind Kejriwal, his deputy Manish Sisodia, besides Raghav Chadha, Atishi and Dilip Pandey.

"My best wishes & congratulations to Mr Kejriwal and the AAP on winning the Delhi Assembly elections," says Rahul Gandhi.

My best wishes & congratulations to Mr Kejriwal and the AAP on winning the Delhi Assembly elections.

"I will open Free self Defense Coaching Centre for Girls in Hari Nagar Vidhanasabha in next 30 Days. It was my promise in my manifesto, I lost but i will try my best to fullfil my Promise to my people on my own Capacity," Tajinder Singh Bagga.

I will open Free self Defense Coaching Centre for Girls in Hari Nagar Vidhanasabha in next 30 Days. It was my promise in my manifesto, I lost but i will try my best to fullfil my Promise to my people on my own Capacity

Rajasthan Deputy Chief Minister Sachin Pilot congratulated Kejriwal. "Congratulations to @Arvindkejirwal and @AamAdmiParty for empathic victory #DelhiResults wish you the best for making Delhi better than it is. People have spoken. Democracy has strengthened. Hopefully, acrimony will end," Pilot, who is also the state Congress chief, tweeted.

“We couldn't perform well, we'll evaluate this. Sometimes we get discouraged when results are not as per our expectations but I would like to tell our workers to not be disheartened...Compared to 2015 our winning percentage has increased,” Tiwari said.

Tiwari talks about BJP bettering its 2015 tally. Tiwari also told his workers to not lose heart.

'I thank the people of Delhi. I thank our party workers for their hardwork, they've done a lot. I accept the mandate of people of Delhi and congratulate Arvind Kejrwial. I hope he'll perform well as per the expectations of the people,' says Tiwari.

What can happen in Delhi can expand to whole country, says AAP leader Gopal Rai.

“Leaving aside electoral issues, one must work and fulfill promises. We must steer clear of the level of politics which was there (in Delhi Election). I congratulate Delhi for giving a decisive mandate fearlessly. I congratulate Arvind Kejriwal,” says Maharashtra Minister Aaditya Thackeray.

RJD leader Tejashwi Yadav: I congratulate Arvind Kejriwal. The mandate given by the people of Delhi has shown that they will vote on work and development.

Today is my wife's birthday. I had the cake, will distribute sweets shortly, says Kejriwal to jubilant AAP workers.

'I love you,' says Kejriwal at AAP headquarters after party sweeps Delhi. Today is 'Mangalvar' (Tuesday), Hanuman Ji's day, I want to say thank you to Lord Hanuman. May god bless us with strength to serve the people of Delhi.

Thank you for trusting your son, says Kejriwal.

'I congratulate Arvind Kejriwal and the people of Delhi for AAP's victory in Delhi Polls 2020. People have shown that the country will be run by 'Jan Ki Baat', not 'Mann Ki Baat'. BJP called Kejriwal a terrorist but couldn't defeat him,' says Maharashtra Chief Minister Uddhav Thackeray.

Kejriwal to address media at 3:30 pm.

So where is the BJP leading in the Delhi? These are the seats where the BJP is still in contest: Bijwasan, Ghonda, Gandhi Nagar, Karwal Nagar, Rohtas Nagar, Rohini, Shahdara and Vishwas Nagar

DMK president MK Stalin greets Arvind Kejriwal for the Aam Aadmi Party's massive win in the Assembly elections in the national capital and said it was a vindication of development politics. Taking to twitter to congratulate Kejriwal, Stalin said: "I congratulate @ArvindKejriwal and @AamAadmiParty for forming government yet again in Delhi, on a massive mandate. This is a clear vindication that development trumps communal politics. Federal rights and regional aspirations must be strengthened in the interest of our country."

BJP’s Kapil Mishra on Delhi results: “I congratulate Aam Aadmi Party and Arvind Kejriwal for the excellent victory. BJP has lost the fifth state election in a row. It means we have somewhere failed to connect with the people of Delhi.”

With AAP leading for a grand comeback, it’s very personal celebration time for Mr and Mrs Kejriwal. Today happens to be the birthday of Sunita Kejriwal.

'I accept the results, but not the defeat,' tweets Alka Lamba,who was Congress candidate from Chandni Chowk.

Kerala Chief Minister Pinarayi Vijayan congratulates Arvind Kejriwal on Delhi results. “Congratulations AAP on a resounding victory in Delhi elections. Let this victory be a harbinger for pro-people and inclusive politics in our country,” Vijayan said on Twitter.

Congratulations to @ArvindKejriwal and @AamAadmiParty on a resounding victory in Delhi elections. Let this victory be a harbinger for pro-people and inclusive politics in our country. pic.twitter.com/oJYbH7YsA3

People's mandate is against us, we accept it; we have resolved to strengthen and rebuild party: Congress on Delhi polls results.

The Aam Aadmi Party is leading on all 10 Assembly seats in New Delhi.

Thank you Delhi for standing up to protect the soul of India!

I take responsibility for the party's performance, we will analyse the factors behind this. Reason for the drop in our vote percentage is politics of polarization by both BJP and AAP, says Delhi Congress Chief Subhash Chopra

As the trends show the AAP sweeping the polls, the BJP office wears a deserted look:

Officials trends of all 70 seats are available on the Election Commission of India’s website. According to the poll panel, the Aam Aadmi Party is leading on 52 seats whereas the BJP is leading on 18 seats.

Reacting on morning trends, Congress lawmaker Adhir Ranjan Chowdhury says, “Everyone knew that Aam Aadmi Party will return to power for the third time. Congress's defeat will not send a good message. The victory of AAP against the Bharatiya Janata Party and its communal agenda is significant.”

Looks like Delhi BJP Chief Manoj Tiwari is on a bit of sticky wicket. As trends show AAP making a comeback, Tiwari said: “Trends indicate that there is a gap between AAP-BJP, there is still time. We are hopeful. Whatever the outcome, being the State Chief I am responsible.”

The Election Commission of India's official trends are in. Trends for 13 out 70 seats are available on the poll panel's site. AAP is leading on 7 and BJP is leading on 6 seats. 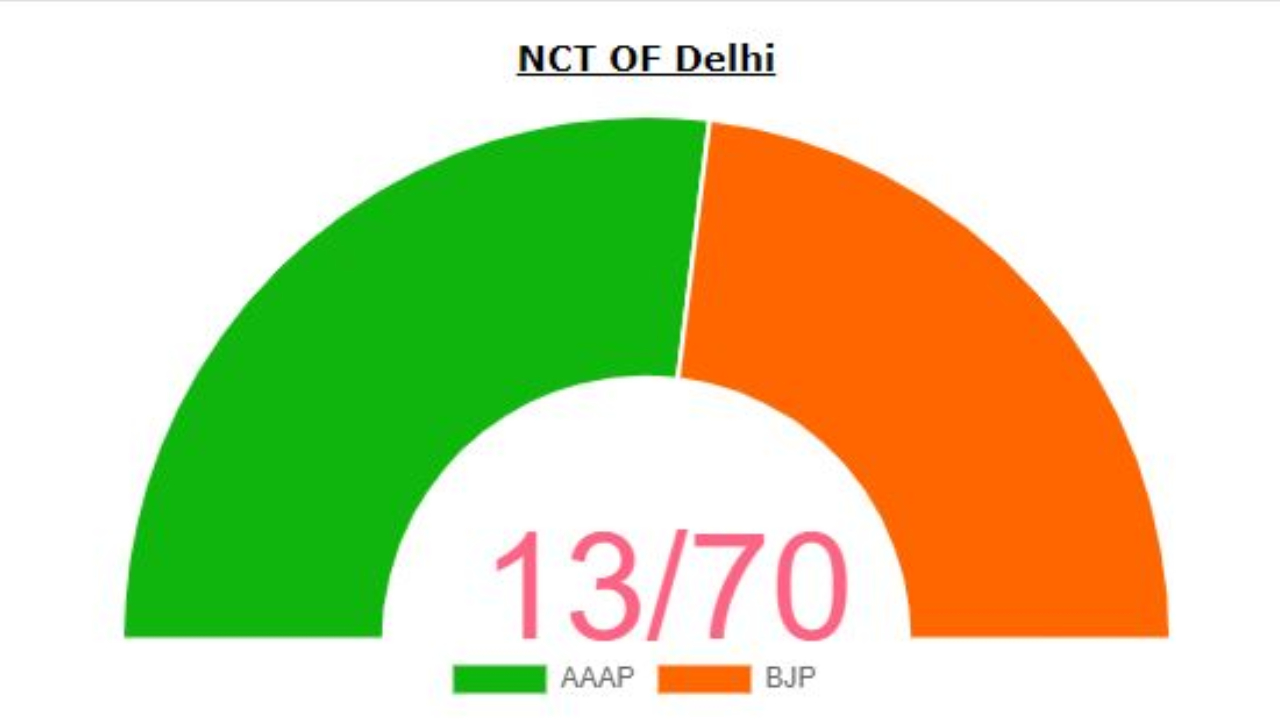 Haroon Yusuf is leading from Ballimaran. The 5-time MLA is the sole Congress leader who is leading in the morning trends.

“There are total 13 rounds of counting. Right now, postal ballots are being counted. The first round of counting will be completed by around 9 am. First trends will emerge around 10am,” says Sanjeev Kumar, Returning officer, AC-55 Trilokpuri.

The house of AAP’s Sanjay Singh has already been decorated with balloons and flowers. The AAP has gained unassailable lead in morning trends.

AAP's Amanatullah Khan has taken an early lead in the Okhla constituency.

Krishna Tirath from Congress is trailing from Patel Nagar.

0: That’s the number of seats on which the Congress is leading!

Arvind Kejriwal and Manish Sisodia are leading from New Delhi and Patparganj constituencies.

AAP is already in celebratory mood. The AAP office wears a festive look!

So what's on Delhi BJP Chief Manoj Tiwari's mind? Looking confident, Tiwari says, 'I am not nervous. I am confident that it will be a good day for BJP. We are coming to power in Delhi today. Don't be surprised if we win 55 seats.'

Krishna Nagar has highest numbers of polling centres in Delhi. There are 203 polling centres. Polling officials say the counting is likely to run into 15 rounds.

Most exit polls also predicted that the Congress is unlikely to open its account even this time in Delhi, which it ruled from 1998 to 2013.

There will be 33 counting observers, the Election Commission officials said.

From every assembly constituency, five VVPATs will be randomly selected and they will be counted.

Each EVM consists of a ballot unit (BU), a controls units (CU) and a voter-verifiable paper audit trail (VVPAT.)

There were lot of speculations over the delay in the turnout announcement. Nearly 24 hours after the polling ended in Delhi, the Election Commission on Sunday announced that the final voter turnout was 62.59 per cent, five per cent less than 2015.

Tight security arrangements have also been put in place at various centres across the national capital.