Haryana Election Results 2019: A Counting Centre Has Been Set Up In Each Of The 90 Assembly Constituencies And There Is An Additional Centre In Gurgaonâ€™s Badshahpur Segment, Which Had A Larger Number Of Polling Booths.

Haryana Election Results 2019: Seven ministers are trailing as both the ruling BJP and the Congress are locked in a tough contest on Thursday with no party looking set to attain majority on its own in the 90-member assembly, according to the latest trends. The BJP, which had set a target of winning 75 seats ahead of the polls, is leading in 38 seats, while the Congress is ahead in 32 constituencies. The fledgling Jannayak Janta Party, which fought its maiden assembly polls, is also ahead in 10 seats. If the trends hold, the JJP could likely emerge as the kingmaker and hold the key to formation of the next government.

The Indian National Lok Dal is ahead in two seats, while the Bahujan Samaj Party and the Loktanter Suraksha Party are leading in one constituencies each, according to the latest trends.

Haryana Election Results: Here are all the updates:

As per the official trends by the Election Commission, BJP has won 26 seats and is leading on 14 taking a total lead on 40 seats.

Haryana Chief Minister Manohar Lal Khattar has sought an appointment at 6 pm from the Governor to meet him.

Punjab Chief Minister Captain Amarinder Singh on being asked 'Do you give credit to Bhupinder Singh Hooda for Haryana?: 100%, to our party, to our party workers. We really won the show, with a little more effort we would have won.

Dushyant Chautala, JJP: Counting of slips from a VVPAT is underway. As soon as I get certificate, I'll discuss with everyone,hold meeting with MLAs tomorrow&decide future course of action.Too early to say anything. I believe state wants change and JJP will bring it.

I thank people who supported me. The kind of respect they gave me, I am thankful for it. People trust the work by BJP and that's why they vote for the party: BJP's Babita Phogat

Captain Abhimanyu, Haryana Finance Minister& BJP candidate from Narnaund constituency in Hisar district: As per the latest trends, I feel that public mandate is in favor of Jannnayak Janta Party (JJP). We respect public mandate.

JJP's Amarjeet Dhanda won the Julana seat by defeating the ruling BJP's Parminder Singh Dhull by a margin of 24,193 votes in the Haryana assembly election on Thursday. Dhull, a turncoat who had joined the BJP ahead of the assembly polls, was the sitting MLA from the seat.

Former Haryana CM BS Hooda in Rohtak: The time has come for Congress, JJP, INLD, and independent candidates to come together to form a strong government.

DS Hooda, Congress: BJP is trying to pressurize independent candidates as most of them want to join us. It can't be accepted in democracy.Independent candidates should be able to freely choose the party whom they wish to support.I want to appeal to EC about it through media.

BJP candidate and Olympic medallist Yogeshwar Dutt is trailing from Baroda by 3,590 votes. Congress leader Sri Kishan Hooda is leading from the constituency.

Congress leader Kuldeep Bishnoi is leading in Adampur. He is leading against BJP's Sonali Phogat.

Wrestler and BJP candidate from Baroda, Yogeshwar Dutt trailing by 3590 votes as per official EC trends.

BJP candidate Sitaram is leading from Ateli seat by 540 votes.

BJP's Narender Gupta is leading from Faridabad seat by 3,050 votes.

Taking to Twitter, Haryana Congress chief said, "Haryana's mandate has shown that the public has rejected BJP. This is not just an electoral defeat for the BJP, but a moral loss as well. Congress will form the government in the state."

The BJP has a thin lead of 283 votes in Mahendragad assembly seat.

Haryana CM Manohar Lal Khattar contesting from Karnal assembly seat is leading with 14030 votes, after third round of counting. 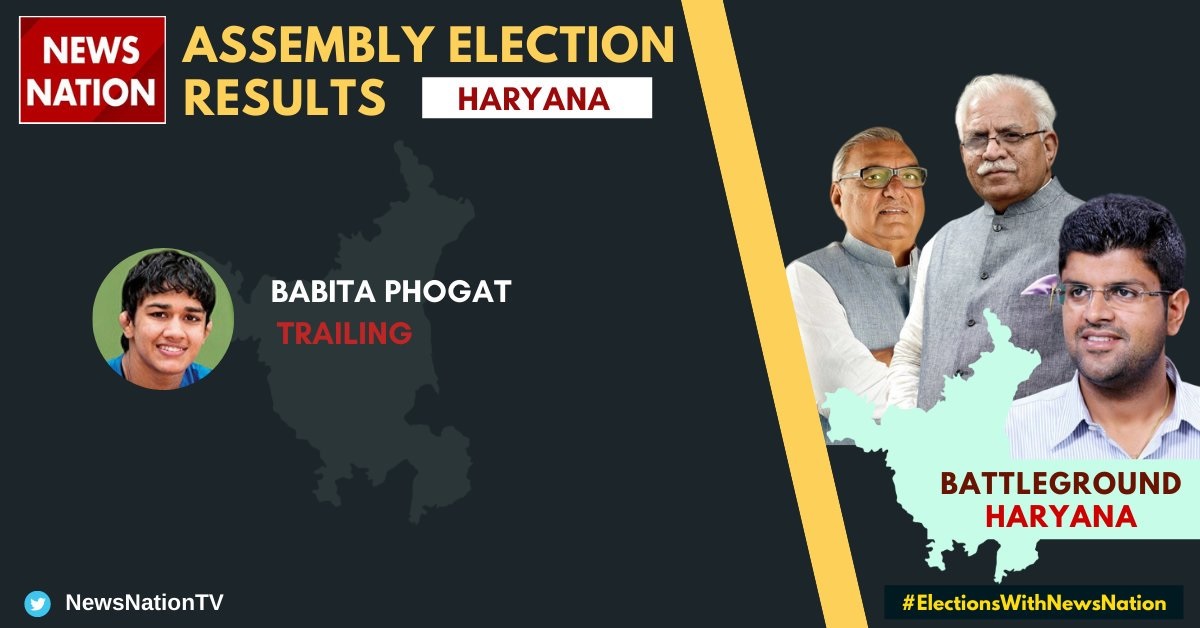 Neck to neck fight in Haryana:

Best of luck to my dear friend & elder brother @rssurjewala as #Haryana goes to poll today -his dedication, hard work & unwavering commitment to his constituency is inspirational & people of Kaithal will definitely bless him once more !! #HaryanaAssemblyPolls pic.twitter.com/JsAxHOVum7

Currently, the ruling Bharatiya Janata Party has 48 members in the state assembly and the Congress has 17.

The voter turnout in polls touched 68.46 per cent. The turnout was less than the 76.54 percentage in the 2014 assembly elections and the 70.36 per cent recorded over the state's 10 parliamentary constituencies in the Lok Sabha elections this year.