The Bharatiya Janata Party (BJP) On Thursday Released The Third List Of 15 Candidates For The Upcoming Jharkhand Assembly Polls.

The BJP announced two lists of 15 candidates on Thursday for the forthcoming Jharkhand assembly elections, taking the total number of its declared contestants to 69. The two lists contained the names of a single candidate Vinod Singh from Hussainabad and the other list had 15 names.

The lists follow two others declared by the party. In the first list, which was declared last week, names of 52 contestants featured. The second list declared on Tuesday contained only the name of Sukhdeo Bhagat, former PCC president who joined the party on October 23.

Among those who featured in the lists of candidates declared on Thursday are the former Left leader Aparna Sengupta and ex-Congress MLA Deo Kumar Dhan. Sengupta has been nominated from Nirsa seat, while Dhan has been allotted Mandar(ST) constituency. Both of them joined the BJP some months ago.

BJP has re-nominated Speaker Dinesh Oraon from Sisai (ST) seat, while the state Land and Revenue Minister Amar Kumar Bauri, who was one of the six JVM-P MLAs merged with the BJP in 2015, will contest from Chandankiyari (SC) seat. Rural Development Minister Neelkanth Singh Munda has been nominated from Khunti (ST) seat.

The BJP lists show that there will be an electoral fight with NDA ally AJSU party at Lohardaga, Chakradharpur, Sindri, Simaria, Hussainabad and Chandankiyari constituencies, where the regional party has also announced candidates.

Polling for the 81 seats in five phases will take place between November 30 and December 20 and counting will be held on December 23. 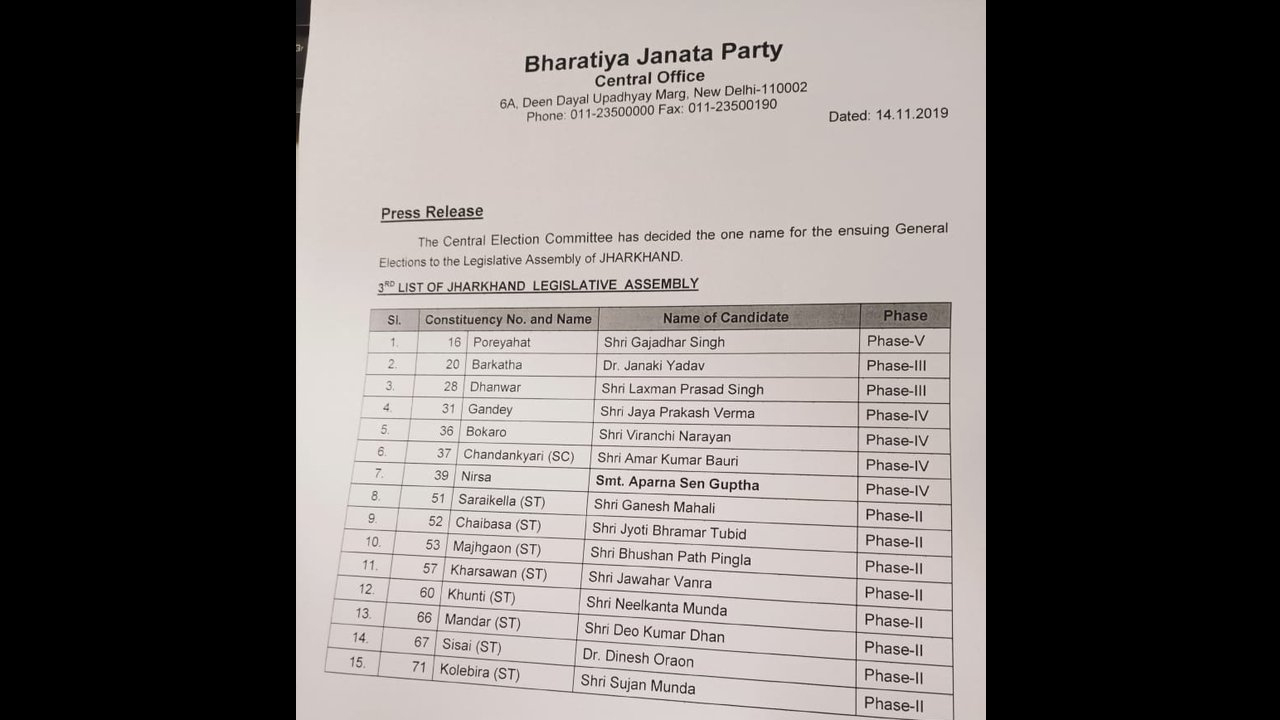