Madhya Pradesh Assembly election results 2018: When and where to watch live coverage

The Official Results Of Madhya Pradesh Assembly Elections 2018 Will Be Announced On December 11. News Nation (Newsnation.in) And Our Sister Channel News State (newsstate.com) Will Bring You The Live Minute To Minute Updates On Election Results.

The Assembly Elections 2018 results in five states are all set to draw the battle lines between the Bharatiya Janata Party (BJP) and the Congress, creating a now-or-never situation for the latter ahead of Lok Sabha election 2019. After high-voltage political campaign by prominent leaders for over a month, the single-phase polls to the 230-member strong Assembly was held on November 28. Though the final counting of votes by the Election Commission (EC) would be taken up on December 11, the exit poll survey conducted by News Nation predicted the fourth term for the Shivraj Singh Chouhan government in the state. Going by the NN Exit Poll, the BJP will bag 108-112 seats to retain power in the state. The Congress, in a neck-and-neck fight with the BJP, is likely to get 105-109 seats in Madhya Pradesh.

Readers who are waiting eagerly for the Assembly elections result in Madhya Pradesh, may stay tuned to News Nation (Newsnation.in) and our sister channel News State (newsstate.com) to get the minute to minute live updates on December 11.

Takeaways of the Madhya Pradesh Elections 2018:

The maximum number of women voters was in the Dhoani constituency where the percentage of male and female voters were 65.11 and 74.98 per cent respectively.

In Madhya Pradesh, as many as 2,899 candidates, including 1,094 independents, are in the fray for 230 seats, but it is considered to be a straight fight between the Congress and the Bharatiya Janata Party (BJP). While the BJP has fielded its candidates in 220 seats, as many as 223 candidates are contesting on behalf of the Congress. The BSP and SP have fielded candidates in 227 and 51 seats respectively in the state. The Aam Aadmi Party, which is contesting the Madhya Pradesh election for the first time, has fielded 208 candidates.

Chief Ministerial candidates of BJP and Congress in Madhya Pradesh:

While the ruling Bharatiya Janata Party (BJP) has decided to go with the current CM Shivraj Singh Chouhan, the Congress party is yet to finalise its chief ministerial candidate in the state. However, speculations have been rife that the Congress will pick between Kamal Nath, Jyotiraditya Scindia and Digvijaya Singh if it voted to the power in Madhya Pradesh.

According to News Nation's post-poll survey, BJP's Shivraj Singh Chouhan continues to be the most preferred chief minister in the state with an impressive 43 per cent votes. Chouhan has been rulling the state since 2003. Congress MP Jyotiraditya Scindia and Kamal Nath is at the second and third place with 29 and 10 per cent of total votes respectively. 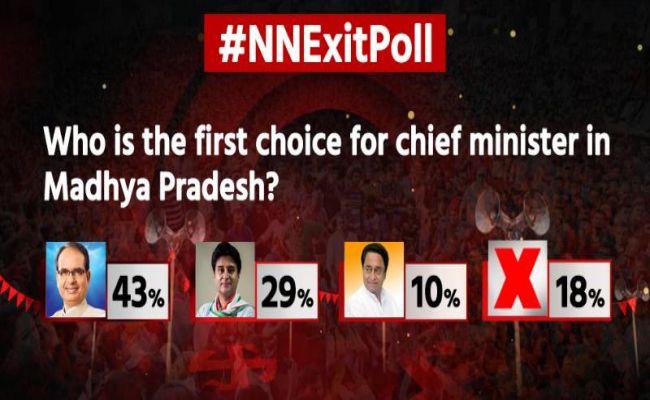 Assembly elections in Madhya Pradesh has been marred with complaints of faulty Electronic Voting Machines (EVMs) and Voter Verifiable Paper Audit Trail (VVVPAT) machines, with the Congress alleging illegalities in deposit of EVMs in the strong room.

The BJP is eyeing a fourth straight term in Madhya Pradesh while the Congress is hoping for a comeback after 15 years in the state, which was once its stronghold.