Results Live: Who Will Be Next Chief Minister Of Maharashtra? Shiv Sena Holds Key

Maharashtra Assembly Election Results 2019: The Polling Held On Monday Saw A Voter Turnout Of 61.13 Per Cent, A Dip From The 63.20 Per Cent Recorded In 2014, The Official Said.

Maharashtra Assembly Election Results 2019: The counting of the votes have begun! The BJP is hoping for thumping mandate for second term as the polling officers will reveal the verdict of polls that took place on Monday. The fate of over 3,000 candidates will be declared by 5 pm today. The BJP-Shiv Sena alliance is confident of second term as predicted by all exit polls. It would be interesting to see how well the Shiv Sena performs. Because it would be these number of seats that would pave the path for Aaditya Thackeray’s future. Counting of votes for the 288 Assembly segments will be conducted at 269 locations, the officials said. The polling held on Monday saw a voter turnout of 61.13 per cent, a dip from the 63.20 per cent recorded in 2014, the official said. The highest turnout, of 83.93 per cent, was reported in the Karveer assembly seat in Kolhapur, while the lowest was in south Mumbai’s upmarket Colaba area at 40.11 per cent.

Here are LIVE updates from Maharashtra:

People of Maharashtra have blessed the NDA with immense affection. We are humbled to have got the people’s support yet again. Our work towards Maharashtra’s progress continues! I salute each and every Karyakarta of the BJP, Shiv Sena and our entire NDA family for their hardwork, tweets PM Modi.

I express my gratitude to the people of Maharashtra & thank them for bringing back this govt once again. I extend my greetings to CM Devendra Fadnavis, BJP President Amit Shah & PM Narendra Modi for this electoral victory: Union Minister Nitin Gadkari

Devendra Fadnavis is also addressing media. He says that it is a clear mandate by voters; next govt will be of BJP-Sena mahayuti (grand alliance).

‘Being his father I am proud of him. I am happy that the people gave him so much love, says Shiv Sena chief Uddhav Thackeray on son Aaditya’s Worli verdict. 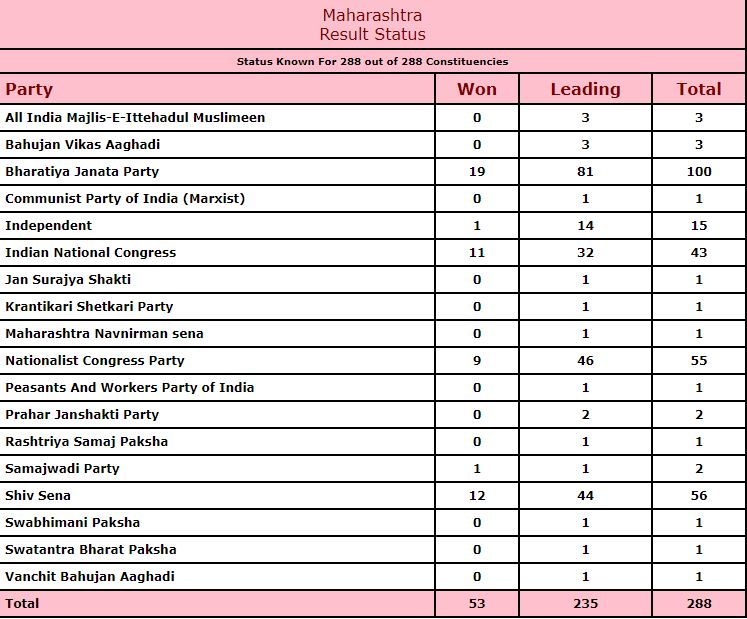 I appreciate the trust and the faith and express absolute gratitude to people of Maharashtra for showing this faith in us: Supriya Sule of NCP

Supriya Sule, NCP: Today the country is stressing is about economy, unemployment, price rise, farmers' issue being big challenges. Core issues are being left out.This mandate clearly tells you that people want somebody who will deliver superior results. #MaharashtraAssemblyPolls pic.twitter.com/3IP9HfeOL1

BJP leader and Maharashtra cabinet minister Pankaja Munde on Thursday accepted her defeat from Parli assembly seat at the hands of her cousin and NCP leader Dhananjay Munde. The result of the Parli seat has not been declared yet, but Pankaja was trailing behind Dhananjay Munde by almost 30,000 votes. "I worked for the constituency. Though I was in the government, my struggle for my constituency and people continued. I take responsibility of this defeat," she said.

Ashok Chavan wins from Bhokar. The former Chief Minister of Maharashtra. At present, he is serving as the President of the Maharashtra Congress Committee.

Power comes and goes, but what remains is commitment towards people: Sharad Pawar

BJP-Shiv Sena’s claims of crossing 220 seats have been belied by the people of Maharashtra, says Sharad Pawar.

“People have not liked the arrogance of the people in power. Want to thank all the allies for their support,” says NCP chief Sharad Pawar.

Congress spokesman Sachin Sawant has said his party's priority would be to keep the BJP "out of power" in Maharashtra.  As counting of votes was underway, Sawant in a tweet said, "Congress' priority would be to keep BJP out of power." However, Congress' campaign committee member Sanjay Lakhe Patil criticised Sawant over his tweet. "This is political bankruptcy and foolishness. The Congress should stay away from such political suicide. Instead, the party should be a strong opposition force and win back the confidence of people," Lakhe Patil said in a post on his Facebook page. The Congress should hold the Fadnavis government "accountable" for the promises made during campaigning, he added.

Pankaja Munde trails in Parli by over 26,000 votes.

Independent candidate Ravi Rana is leading from Badnera by 3,275 votes.

BJP leader Sudhir Mungantiwar is leading from Ballarpur by 3,114 votes.

Sharad Pawar to hold a press conference in mumbai at 2:30pm

Ex-Mayor and BJP rebel Geeta Jain leading in Mira-Bhayander. She is the sister-in-law of Narendra Mehta, BJP's sitting MLA from Mira Bhayandar, who was renominated by the party from the seat for the assembly elections. Jain is Mehta's political rival. Read full story here.

NCP’s Dilip Walse-Patil is leading from Ambegaon. Ambegaon is an Assembly seat in West Maharashtra region and Pune district of Maharashtra and is part of Shirur Lok Sabha constituency.

Shiv Sena is heading towards a better show than last time. In comparison with tally of 63, Shiv Sena is already leading in 73 seats.

Maharashtra trends at 9.30 am

Senior NCP leader Chhagan Bhujbal, who is seeking another term from Yevla Assembly constituency in Nashik, is leading in morning trends. In the 2014 assembly elections, Bhujbal had defeated his nearest rival Sambhaji Pawar of Shiv Sena by a margin of more than 46,000 votes.

The BJP is leading on 101 seats. All eyes on whether it will be able to better its last tally.

The BJP is heading towards bettering its performance in comparison from last elections. The party is leading on 82 seats. Last assembly elections, the BJP had won 122 seats.

Pankaja Munde, the minister in Fadnavis cabinet, is trailing from Parli. Her cousin and political opponent Dhananjay Munde is leading from the seat. Incumbent BJP MLA Pankaja is daughter of BJP veteran late Gopinath Munde.

Rohit Pawar is trailing from Karjat Jamkhed. The grand nephew of former Union Minister Sharad Pawar, Rohit Pawar is contesting for the first time from the Kajrat-Jamkhed assembly constituency.

Looks like early trends show return of saffron wave in Maharashtra. The incumbent alliance of BJP-Shiv Sena is leading on 38 seats.

Blockbuster beginning for the BJP-Shiv Sena alliance. From Worli to Parli to Nagpur South West, Fadnavis magic seems to be working all over again!

BJP-Shiv Sena leading on 13 seats, Congress-NCP ahead on 4 seats

Whatever may be the results, but Devendra Fadnavis has already created a record. He has become the first Maharashtra CM in 47 years to complete a five-year term in office.