The Congress-NCP Alliance Has Already Taken The Lead Over The 'saffron Alliance' If The Seat-sharing Arrangement Is Concerned.

Maharashtra Assembly Elections 2019: The Election Commission is likely to announce the dates for Maharashtra Assembly Elections soon along with Haryana and Jharkhand. The Bharatiya Janata Party (BJP) has been leading the Maharashtra government under the leadership of Devendra Fadnavis since 2014 and is contesting the upcoming polls on the basis of Fadnavis' five-year term. The party has already declared him as its chief ministerial candidate much to the chagrin of its alliance partner, the Shiv Sena. The Uddhav Thackeray-led party wants the BJP to share the chief minister's post on a rotational basis with it after the 2019 Maharashtra Assembly Elections. According to some reports, Uddhav's son and Yuva Sena leader Aditya Thackeray is likely to contest from the Worli Assembly seat in the upcoming Assembly polls in order to exert pressure on the saffron party. Aditya will be the first member of the Thackeray family who will contest any election if he decides to do so. The Sena has been demanding an equal share of seats for both the parties. However, the BJP is in no mood to succumb this time after the one-sided victory in the 2019 Lok Sabha Elections and a 'positive mood' in the masses due to the Narendra Modi government's decision of scrapping Article 370 in Jammu and Kashmir. Let's analyse the present political situation in the state of Maharashtra.

Who Will Win Maharashtra: BJP-Shiv Sena Or Congress-NCP?
The Congress-NCP alliance has already taken the lead over the 'saffron alliance' if the seat-sharing arrangement is concerned. Congress leader and former chief minister Prithviraj Chavan and NCP chief Sharad Pawar have announced that both the parties will contest 125 Assembly seats each and have left the remaining 38 seats for other allies. The Maharashtra Assembly has 288 Assembly constituencies. However, both the parties were yet to decide the seats they will contest. The other allies are likely to include Raju Shetti's Swabhimani Paksha, Jogendra Kawade's People's Republican Party, Peasants and Workers Party (PWP) and Left parties. Prakash Ambedkar's Vanchit Bahujan Aghadi (VBA) has decided to contest the polls alone and recently broke off with Asaduddin Owaisi's AIMIM. Also Read: Udayanraje Bhosale, NCP Lok Sabha MP, Joins BJP In Presence Of Amit Shah

On the other hand, the BJP and the Shiv Sena are still engaged in a tug of war with each other over the number of seats these two parties want to contest. The saffron camp also includes Union Minister Ramdas Athawale's Republican Party of India (A), state minister Mahadev Jankar's Rashtriya Samaj Paksha and Vinayak Mete's Shiv Sangram. According to media reports, the BJP is keen to contest at least 155 to 160 seats this time due to its increasing 'political dominance' in the state. The party wants to leave only 105 to 110 seats for the Sena and 15-18 seats for Athawale, Jankar and Mete. The mass exodus of Congress-NCP leaders in the party is also responsible for it to rethink its strategy in the state. Congress rebels Radhakrishna Vikhe Patil, his son Sujay Vikhe Patil and NCP leaders Udayanraje Bhosale and Ganesh Naik and others have already joined the BJP, while Abdul Sattar, Sachin Ahir, Bhaskar Jadhav and Jaidutta Kshirsagar chose to go with the Sena. The rift between Congress leaders Sanjay Nirupam and Milind Deora also made a lot of headlines for all the wrong reasons. The departure of Priyanka Chaturvedi and Urmila Matondkar from the party exposed chinks in the armour of the party. Also Read: Maharashtra: Announcement On BJP-Shiv Sena Poll Alliance In 2 Days, Says Uddhav Thackeray 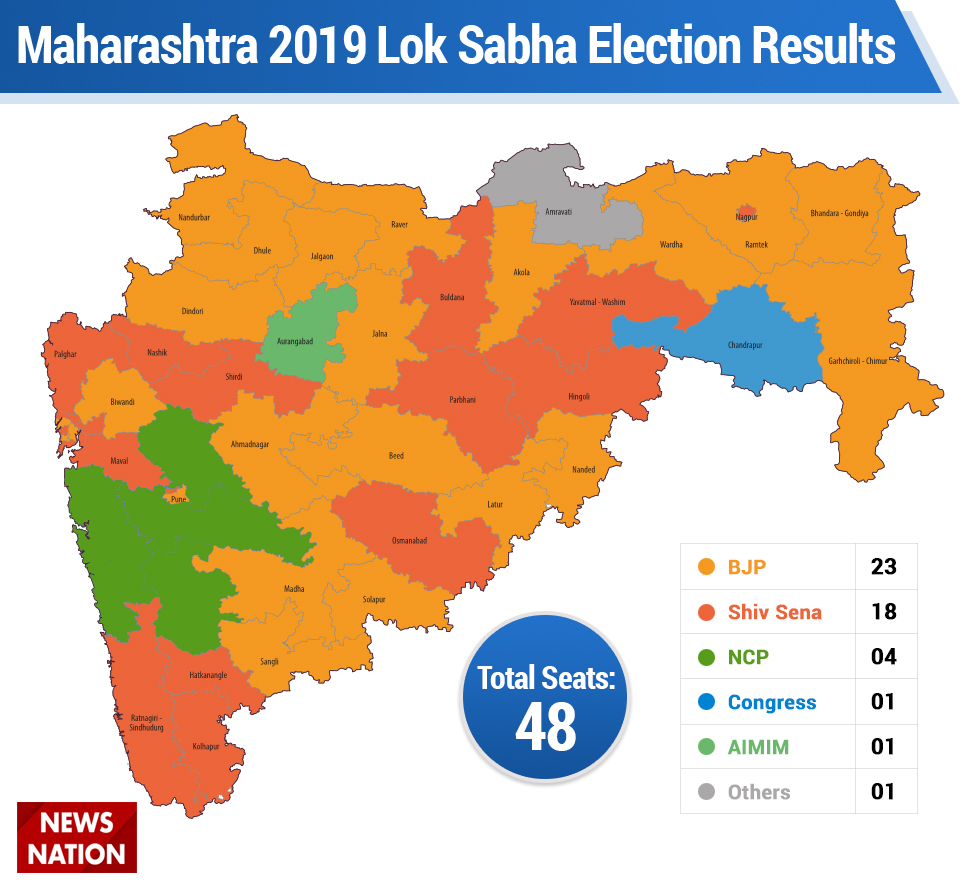 What Happened In 2019 Lok Sabha Elections In Maharashtra?
Maharashtra has 48 Lok Sabha seats. In the 2019 Lok Sabha Elections, the BJP was successful in forging an alliance with the Shiv Sena again. The party contested on 25 seats and left 23 seats for the Sena. Earlier, the seat-sharing formula was 26-22. The alliance repeated its 2014 performance and won 41 seats together. The BJP won 23 seats and received 1,49,12.139 votes with a share of 27.6 per cent of the total votes, whereas the Shiv Sena was successful on 18 seats again and garnered 1,25,89,064 votes with a share of 23.3 per cent of the total votes in the state. Both the parties together received 51 per cent of the votes. Some of the prominent winners of the alliance were Poonam Mahajan (BJP-Mumbai North Central), Gopal Shetty (BJP-Mumbai North), Gajanan Kirtikar (Shiv Sena-Mumbai North West), Arvind Sawant (Shiv Sena-Mumbai South), Pritam Munde (BJP-Beed), Sujay Vikhe Patil (BJP-Ahmednagar) and Bhavana Gawali (Shiv Sena-Yavatmal-Washim).

On the other hand, the Congress-NCP alliance was completely decimated in the state as the Grand Old Party was able to win just a single seat of Chandrapur in the Vidarbha region of the state. It received 87,92,237 votes with a vote share of just 16.3 per cent in the entire state. The NCP gathered only 83,87,363 votes with a share of 15.5 per cent of votes but was successful in winning four Lok Sabha seats of Baramati, Shirur, Satara and Raigad. The alliance together clocked close to 32 per cent of votes in the state. Priya Dutt, Sanjay Nirupam, Milind Deora, Nana Patole, Ashok Chavan, Sameer Bhujbal, Urmila Matondkar, Parth Pawar and Raju Shetti lost the elections.

The Congress and the NCP also contested the polls separately and won 42 and 41 seats respectively. Congress was able to garner only 18 per cent of the votes (94,96,095 votes) in the entire state, whereas the NCP was restricted to just 17.2 per cent of votes (91,22,285 votes). The Raj Thackeray-led Maharashtra Navnirman Sena (MNS) won only a single seat and received just 3.15 per cent of votes.

What Happened In Maharashtra In 2014 Lok Sabha Elections?
The BJP and the Shiv Sena fought the 2014 Lok Sabha Elections together along with Raju Shetti and won 42 seats. The alliance secured close to 48 per cent of the popular votes in the state. The Congress-NCP alliance was reduced to just 6 seats with a vote share close to 35 per cent. Several bigwigs Sushilkumar Shinde (Congress), Mukul Wasnik (Congress), Praful Patel (NCP), Chhagan Bhujbal (NCP), Sanjay Nirupam (Congress) and Milind Deora (Congress) lost the elections.