Series Of Marathon Meetings Have Begun In Delhi, Mumbai And All Eyes Are On The Congress, NCP, Shiv Sena Top Leadership To Make Crucial Announcement.

Maharashtra government formation updates: The Shiv Sena on Monday claimed that the NCP and Congress have agreed "in-principle" to back its government without the BJP in Maharashtra but failed to get letters of support from the political rivals before the deadline set by the Governor who rejected its plea for three more days to do so. As the impasse in government formation entered the 18th day and the prospect of President's rule loomed, the Congress appeared not wanting to take a hasty decision to align with its ideological rival, and decided to hold further talks with its pre-poll ally Nationalist Congress Party (NCP) on the issue of supporting the Sena.

As the 7.30 pm deadline ended for Shiv Sena, Governor Bhagat Singh Koshyari on Monday night invited the NCP asking it to express "willingness and ability to form government". State unit NCP president Jayant Patil said the party will discuss the issue with  Congress and get back to the governor by 8:30 pm on Tuesday.

There has been no headway in government formation after results of the state Assembly polls were declared on October 24 in which the BJP won 105 seats, Shiv Sena-56, NCP- 54 and Congress-44. So, will Maharashtra see a unique alliance of Shiv Sena, NCP and the Congress today?

"The BJP core team meeting has concluded. The political situation in the state was discussed in the meeting. On its basis, the BJP is taking the stand of 'wait and watch'," said BJP leader Sudhir Mungantiwar.

Sudhir Mungantiwar, BJP: The BJP core team meeting has concluded. The political situation in the state was discussed in the meeting. On its basis, BJP is taking the stand of 'wait and watch'. #Maharashtra pic.twitter.com/aC3yCqyDUr

"As per the procedure, the Governor has given us the letter (to stake claim to form government) being the third largest party in Maharashtra. We suggested him that we'll have to talk to our allies and we'll get back to him as early as possible. The deadline is 8.30 pm tomorrow," said NCP leader Jayant Patil.

Nawab Malik, NCP: We have been called by the Governor, a delegation of our party is meeting him now. We've been called to form the govt. As per the letter given by the Governor we'll hold discussions with Congress & see how a stable govt can be provided to the state. #Maharashtra pic.twitter.com/VJqyxikq8p

"At 8.30 pm the Governor called us and asked me to come to meet him. Along with Chhagan Bhujbal, Jayant Patil and others, I am going to meet him. We have no idea as to why did he call us. The governor is an important person so we are going to meet him," said NCP leader Ajit Pawar.

Ajit Pawar, NCP: At 8:30 pm the Governor called us and asked me to come to meet him. Along with Chhagan Bhujbal, Jayant Patil and others, I am going to meet him. We have no idea as to why did he call us. Governor is an important person so we are going to meet him. #Maharashtra pic.twitter.com/swT4cekton

"Delegation of Shiv Sena met the governor and expressed willingness to form government. However, they couldn't submit requisite letter of support. They submitted letter requesting three-day extension for submitting letters of support. The governor expressed inability to give further extension," said the Maharashtra governor in a statement.

Shiv Sena leader Aaditya Thackeray said: "We told the governor that we are willing to form the government. We asked him for at least 2 days time but we weren't given time. The claim (to form government) wasn't denied but the time was. We'll continue to put in efforts to form government in the state."

The Congress issued a statement, saying that it is yet to decide on the Maharashtra government formation. “The party will have further discussions with the NCP," it said. 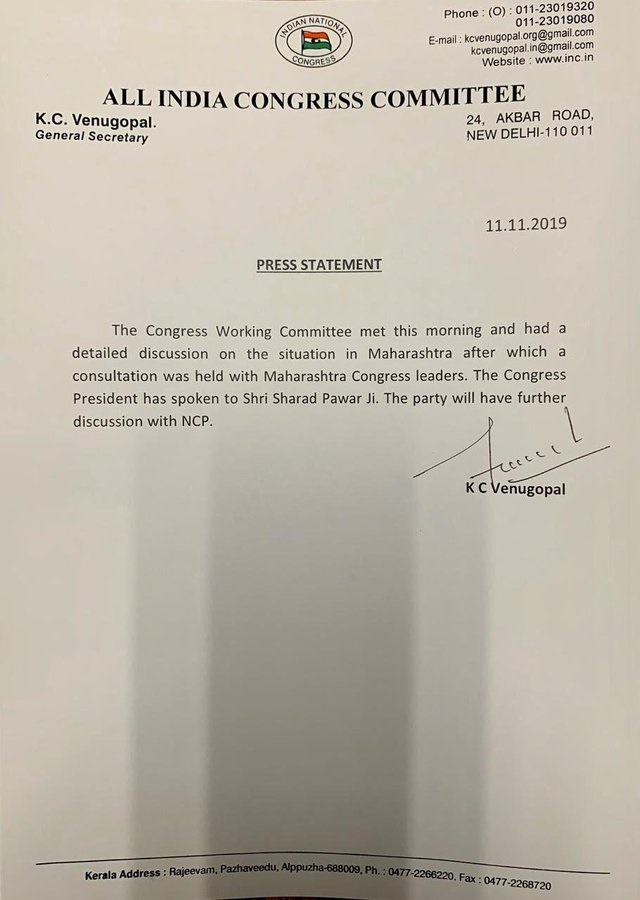 The swearing-in ceremony of the Shiv Sena Chief Minister will be held on November 17. November 17 is the death anniversary of Shiv Sena founder Balasaheb Thackeray, said sources.

The Congress and the NCP have sent letters of support to Shiv Sena, says Sena mouthpiece Saamana.

The Congress is going to issue a press statement soon on the Mahrashtra political crisis.

The Congress will support the Shiv Sena and the NCP, both the parties have been informed. The final proceedings are being done, said sources.

The Congress sent the letter of support to the Shiv Sena, say sources.

Top Congress leaders, former Maharashtra chief ministers Ashok Chavan, Prithviraj Chavan and Sushilkumar Shinde as well as state unit chief Balasaheb Thorat met party president Sonia Gandhi on Monday evening to decide on whether or not to support the Shiv Sena in forming a government in the state.

Congress Interim President Sonia Gandhi speaks to some party MLAs from Maharashtra who are lodged in a Jaipur hotel: Sources.

Shiv Sena leaders Aaditya Thackeray and Eknath Shinde left Matoshree and are heading towards the Raj Bhavan to meet the governor.

Congress interim President Sonia Gandhi and Shiv Sena Chief Uddhav Thackeray had a brief telephonic conversation a short while back.

Congress leaders AK Antony and Ahmed Patel arrive at 10 Janpath (Congress Interim President Sonia Gandhi's residence) in New Delhi. Party's Maharashtra leaders have been called to Delhi for further discussions over the political situation in Maharashtra, the meeting to be held shortly.

The meeting between Sharad Pawar and Uddhav Thackeray ends.

BJP went back from their pre election promises. It would not have been morally right for me to continue in the Centre, so I have resigned as Union Minister, says Sawant.

Uddhav Thackeray may visit Sharad Pawar at his residence.

We are waiting for Congress to take a decision. We fought elections together and whatever will be decided, it will be decided together, says Nawab Malik, NCP after party's core group meeting on govt formation in Maharashtra.

We have called our Maharashtra leaders to Delhi for further discussions, the meeting will be at 4 pm, says Congress leader Mallikarjun Kharge after party's Working Committee meeting.

Next round of meeting at 4 pm, say sources.

Chief Minister of Bihar, Nitish Kumar on being asked 'Shiv Sena has left NDA, what do you have to say?': Vo jaane bhai isme humko kya matlab hai?

Nationalist Congress Party chief Sharad Pawar to chair party's core group meeting which is to be held today in Mumbai, over the current political situation in the state. Praful Patel, Supriya Sule, Ajit Pawar, Jayant Patil & other party leaders will be present.

Meanwhile, Sharad Pawar has spoken about Shiv Sena exiting the NDA govt. “I haven't had a word with anyone regarding anyone’s resignation. We'll have a word with Congress today. Whatever decision is to be taken will be taken only after discussions with Congress,” Pawar told reporters in Mumbai.

They (BJP) are willing to sit in opposition, but they are reluctant to follow the 50-50 formula, for which they agreed before polls, says Raut

Shiv Sena’s Sanjay Raut addresses media. Says that the BJP has insulted the people of Maharashtra by not forming the government. He also said that the party shouldn’t have made comments of Uddhav Thackeray. He said that it was BJP’s ego that didn’t allow the state to have a stable government.