PM Modi Was The First Leader Who Congratulated The BJP-NCP Alliance In Maharashtra. 'Congratulations To Devendra Fadnavis Ji And Ajit Pawar Ji On Taking Oath As The CM And Deputy CM.'

Breaking the political logjam, BJP’s Devendra Fadnavis took oath as Maharashtra Chief Minister at Raj Bhavan in Mumbai on Saturday morning. NCP’s Ajit Pawar took oath as Deputy Chief Minister in a quick ceremony. Prime Minister Narendra Modi was the first leader who congratulated the BJP-NCP alliance in Maharashtra. “Congratulations to Devendra Fadnavis ji and Ajit Pawar ji on taking oath as the CM and Deputy CM of Maharashtra respectively. I am confident they will work diligently for the bright future of Maharashtra,” PM Modi said on micro-blogging site.

Justice NV Ramana, Justice Ashok Bhushan and Justice Sanjiv Khanna to hear at 1130 am on Sunday the joint plea of Shiv Sena, Nationalist Congress Party and Congress against the decision of Maharashtra Governor inviting Devendra Fadnavis to form the government on Nov 23.

BJP leader Ashish Shelar in Mumbai: Bharatiya Janata Party is of the view that Ajit Pawar's appointment as NCP legislative party leader was valid and appointment of Jayant Patil in his place today is invalid.

Supreme Court to hear on tomorrow at 11.30 am the joint plea of Shiv Sena, Nationalist Congress Party and Indian National Congress against the decision of Maharashtra Governor inviting Devendra Fadnavis to form the government on November 23.

The meeting of NCP MLAs with Sharad Pawar at YB Chavan Centre has ended.

36 MLAs have turned up at YV Chavan Centre so far for NCP meeting, say sources.

36 MLAs have turned up at YV Chavan Centre so far for NCP meeting, say sources#MaharashtraPolitics#MaharashtraPawarPlay

The Shiv Sena has filed a writ petition in the Supreme Court against Devendra Fadnavis and Ajit Pawar taking oath as CM and Deputy CM of Maharashtra respectively.

"My faith is on Sharad Pawar, I am with NCP only. I went to Raj Bhavan when Ajit Pawar asked me to go with him," tweets NCP MLA Diliprao Bankar.

NCP MLA Diliprao Bankar tweets, "My faith is on Sharad Pawar, I am with NCP only. I went to Raj Bhavan when Ajit Pawar asked me to go with him". #Maharashtra pic.twitter.com/xBfOI531uQ

Mumbai: Maharashtra Deputy CM Ajit Pawar is holding a meeting with NCP MP Sunil Tatkare and NCP MLAs Dilip Walse Patil and Hasan Mushrif at his brother Sriniwas Pawar's residence. Security has been heightened outside the residence of Sriniwas Pawar.

According to reports, a large number of NCP supporters have gathered outside gate number 8 of the airport. They are protesting against  the  MLAs who have extended support to Ajit Pawar and the BJP.

"We will give a stable government in Maharashtra," says Devendra Fadnavis.

The governor worked not as constitutional authority, but as a hitman at the instance of Amit Shah: Randeep Surjewala

Nine NCP MLAs, who backed Ajit Pawar and BJP, on way to Delhi in a private jet.

This was the moral and electoral victory of the BJP alliance when the BJP and Shiv Sena won the majority. On whose direction did Shiv Sena become agitated after the election result?

Union Minister Ravi Shankar Prasad: Throughout the election campaign, Devendra Fadnavis' name was projected as the Maharashtra Chief Minister. Support base of BJP and the prospect of Devendra Fadnavis becoming CM, played a crucial role in success of Shiv Sena candidates.

People's mandate was for Fadnavis government

Amid fears of horse trading, Congress likely to shift their MLAs to Bhopal.

The ternd of BJP leaders congratulating Fadnavis continues. Haryana Chief Minister Manohar Lal Khattar congratulated Devendra Fadnavis and Ajit Pawar for taking oath as the chief minister and deputy chief minister of Maharashtra respectively on Saturday and said the state will touch new heights of development under their leadership.

We didn’t delay the process, says Congress leader Ahmed Patel. Some leaders from NCP went away and gave a list to the Governor.

Uddhav Thackeray says BJP’s game is an insult of people of Maharashtra.

We want a government under the leadership of Shiv Sena and we are going to stay together for this, says Sharad Pawar.

All three parties will discuss and decide on what action should be taken, says Sharad Pawar.

NCP MLA Rajendra Shingane: Ajit Pawar had called me to discuss something and from there I was taken with other MLAs to Raj Bhavan. Before we could understand oath ceremony was complete. I rushed to Pawar Sahab and told him I am with Sharad Pawar and NCP.

Sharad Pawar presents one of the lawmakers who was called by Ajit Pawar. He says that he was not aware why ‘Ajit dada’ called him. Sharad Pawar says 8-10 MLAs are with Ajit Pawar.

Those who think they have numbers, they should know the law, says Sharad Pawar.

I am sure that not a single NCP worker will go with the BJP, says Sharad Pawar.

Till 6:30 am, we were told that Governor is in raj Bhavan. Then we got to know about Ajit Pawar taking oath, says Sharad Pawar

Meanwhile, BJP will address the media at party's state office in Mumbai at 2.30 pm today.

Congress pulls out of joint presser with Shiv Sena and NCP.

The Kerala unit of the Nationalist Congress Party (NCP), a partner of the state's ruling LDF, has condemned party leader Ajit Pawar's decision to support the BJP to form the government in Maharashtra, saying he fell into the "trap" of the saffron party. Senior NCP leader and party MLA Mani C Kappen urged the central leadership to initiate steps to disqualify Ajit Pawar and his supporters on the basis of anti-defection law.

As NCP top brass cry horse over Ajit Pawar’s betrayal, there are reports coming in about those who backed Sharad Pawar’s nephew. News Nation has learnt the names of leaders who are backing Ajit Pawar. They are Dhananjay Munde, Rajendra Shigne, Manik Rao Kokate and Dilip Bankar. 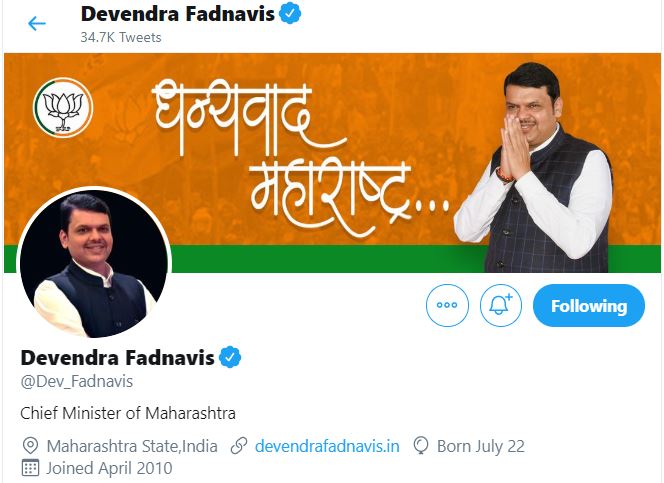 Union Defence Minister Rajnath Singh said it was the prerogative of the governor to invite a party to form a government. The comments come after BJP's Devendra Fadnavis and NCP leader Ajit Pawar took oath as the Maharashtra chief minister and deputy chief minister respectively on Saturday in an unexpected development a day after Shiv Sena president Uddhav Thackeray emerged as the Sena-NCP-Congress' consensus candidate for the top post. "At this point of time in this programme, I do not wish to make any political statement. It was the prerogative of the governor," Singh said at an event in Lucknow. "The governor invited the person (to form the government) after he was satisfied."

Meanwhile, the ruling AIADMK in Tamil Nadu on Saturday greeted BJP leader Devendra Fadnavis and NCP's Ajit Pawar for taking over as Chief Minister and Deputy chief minister of Maharashtra, respectively, early in the day. AIADMK Coordinator and state deputy chief minister O Panneerselvam extended his greetings to the two leaders on Twitter. "I extend my greetings (to both) to work towards a sustained growth of Maharashtra," he said in a tweet. The AIADMK is a constituent of the BJP-headed National Democratic Alliance (NDA).

Sharad Pawar has also reached the YB centre and will address the media along with Thackeray.

Thank you so much Hon’ble PM @narendramodi ji !
Under your guidance and leadership, we are once again looking forward to take #Maharashtra to newer and greater heights ! https://t.co/laJKhXZWFL

Girish Mahajan, BJP on Sanjay Raut: Verbal diarrhoea will be the right phrase to use for him. Even many Shiv Sena MLAs are frustrated with him and they may also think of going with us.

Ajit Pawar was with them till the last moment. Raut said Pawar said he was going to meet a lawyer. "Now we have learnt which lawyer he was sitting with," Sanjay Raut said.

Sanjay Raut, Shiv Sena: Sharad Pawar saheb has nothing to do with this, Ajit Pawar has backstabbed the people of Maharashtra.

Ajit Pawar's decision to side with BJP his own, not that of NCP: Sharad Pawar

President’s Rule revoked at 5:47 AM in Maharashtra.

Surreal wht I read abt #Maharashtra. Thought it was fake news. Candidly &personally speaking, our tripartite negotiations shd not have gone on for more than 3 days...took too long. Window given was grabbed by fast movers. #pawarji tussi grt ho! Amazing if true, still not sure

Ram Madhav: If there are two parties that can claim to have people's mandate in Maharashtra they are the ones got together today to form the government. Hearty congratulations to Devendra Fadnavis and Ajit Pawar. It will turn out to be a historic alliance in Maharaahtra politics.

In one of the biggest political twists in recent years, BJP’s Devendra Fadnavis took oath as Maharashtra Chief Minister at Raj Bhavan in Mumbai on Saturday morning, even as everyone was expecting a NCP-Shiv Sena-Congress official declaration on government formation. NCP’s Ajit Pawar took oath as Deputy Chief Minister in a quick ceremony in Mumbai.