LIVE | Maharashtra: State Unit NCP President Jayant Patil Said The Party Will Discuss The Issue With Congress And Get Back To The Governor By 8:30 Pm On Tuesday.

As political stalemate continues, Opposition parties are into huddle to strategies over their Maharashtra plan. The Shiv Sena on Monday was racing against time to cobble together an alliance to form a government, with the NCP mulling extending their support to the right-wing party. The NCP has said it will decide on whether to support a Sena-led government in coordination with ally Congress. Governor Bhagat Singh Koshyari on Monday night invited the NCP asking it to express "willingness and ability to form government". State unit NCP president Jayant Patil said the party will discuss the issue with Congress and get back to the governor by 8:30 pm on Tuesday.

BJP leader Sudhir Mugantiwar: "This is Rane Sahab's personal opinion. There was no discussion held on this issue in the BJP core committee meeting."

Narayan Rane, Bharatiya Janata Party on being asked if Congress, NCP leaders are in touch with him: "I cannot say anything on it. All I can say is that I am trying to help form government."

Former Maharashtra CM Devendra Fadnavis in a press note: "President's rule is unfortunate, but we expect that Maharashtra will get a stable government soon."

Narain Rane, Bharatiya Janata Party (BJP): "BJP will try to form government. Devendra Fadnavis is putting in all efforts in this direction."

Uddhav Thackeray, Shiv Sena chief: "BJP was invited by the Governor but they refused to form govt in the state. The next day, we were given the invitation (by Governor), we were given only 24 hours time but we required 48 hours. But he (Maharashtra) didn't give us 48 hours time."

Uddhav Thackeray, Shiv Sena: "BJP-Shiv Sena were together for many years, but now Shiv Sena has to go with Congress-NCP. We'll hold further talks with both of them. I would like to thank Arvind Sawant, many people have lust for ministerial post but he isn't like that. Proud of him."

Uddhav Thackeray, Shiv Sena chief: "Yesterday, we formally requested Congress-NCP for their support to form the government. We needed 48 hours, but the Governor didn't give us time."

Uddhav Thackeray, Shiv Sena chief: "BJP was invited by the Governor but they refused to form govt in the state. The next day we were given the invitation (by Governor), we were given only 24 hours time but we required 48 hours. But he (Maharashtra) didn't give us 48 hours time."

Congress leader Ahmed Patel said: "Bharatiya Janata Party, Shiv Sena, Nationalist Congress Party got invitation from the Governor to prove majority. But the Congress did not get an invitation. We condemn it."

NCP chief Sharad Pawar said: "We are in no hurry. We will hold discussions with Congress and then take a decision (to support Shiv Sena)."

"The way President's rule was recommended, I condemn it. This government has violated the SC guidelines on President's rule on several occasions in in the last 5 years," said Congress leader Ahmed Patel.

NCP leader Praful Patel said: "A meeting was held between senior leaders of NCP and Congress today. On November 11 Shiv Sena first contacted us formally. We will discuss on all the issues and then take a decision."

Shiv Sena's lawyer Sunil Fernandes said: "The SC registry has said they may mention the matter on Wednesday before the court, for urgent hearing. Fresh/second petition challenging the imposition of President's Rule is being readied. The decision on when to file it will be taken on Wednesday."

No hearing on Tuesday in the Supreme Court on Shiv Sena’s plea against Maharashtra Governor Bhagat Singh Koshyari's decision of denying three more days to the party to get letters of support from the NCP and the Congress.

"About the President's Rule, whatever information I am getting it's through the news channels. Let's have a legal discussion on this and accordingly if there is a necessity of filing a petition we will take a legal recourse as per law," said Shiv Sena's lawyer Rajesh Inamdar.

Maharashtra Assembly to be in suspended animation: Officials

The BJP calls an emergency meeting at Devendra Fadnavis' residence at 6 pm on Tuesday.

"If the President's rule is imposed in Maharashtra, the Shiv Sena will file second petition challenging it in SC: Party lawyer.

Shiv Sena files petition in the Supreme Court challenging Maharashtra Governor's decision to not extend the time given to the party to prove their ability to form government. Advocate Sunil Fernandez has filed the plea for Shiv Sena.

Raj Bhavan: "Governor of Maharashtra Bhagat Singh Koshyari having been satisfied that as Govt of Maharashtra cannot be carried on in accordance with the Constitution, has today submitted a report as contemplated by the provisions of Article 356 of Constitution (President's Rule)."

Former Maharashtra chief minister Prithviraj Chavan on Tuesday rejected criticism that the Congress delayed its decision on supporting the Shiv Sena for government formation in the state.

“Today NCP meeting was held. All 54 MLAs were present. It has been decided that looking at the uncertainty in the state, we'll empower Sharad Pawar ji to take a decision on alternative govt. A committee will be formed for the same which will be led by Sharad Pawar,” says Nawab Malik.

Sources say that the Shiv Sena is likely to move the Supreme Court in case the President’s Rule is imposed in the state.

Maharashtra Raj Bhavan on Tuesday trashed all media reports and clarified that Governor Bhagat Singh Koshyari has not recommended President’s rule in Maharashtra. Raj Bhavan’s public relation officer denied the development. Speaking exclusively to News Nation, the PRO said that the process of Maharashtra government formation is on. It should be noted that the Governor has already given a time frame to the NCP to form the government. The deadline for Sharad Pawar’s party ends at 8:30 pm on Tuesday.

Asaduddin Owaisi, AIMIM: We will neither support a BJP led Govt nor a Shiv Sena led Govt, we reiterate our stand.I am happy now if Congress-NCP are supporting Shiv Sena, people will know who was cutting whose votes and who was colluding with whom.

Hon'ble Congress President Smt.Sonia Gandhi spoke to Shri.Sharad Pawar today morning and deputed Shri.Ahamed Patel, Shri.Mallikarjun Kharge and myself for holding further discussions with Shri.Pawar.
We three are going to Mumbai now and will meet Shri.Pawar at the earliest.

NCP and Congress had pre-poll alliance, and final decision will be a collective decision. Our talks with NCP are on, and we will only move forward once discussions with them are done. 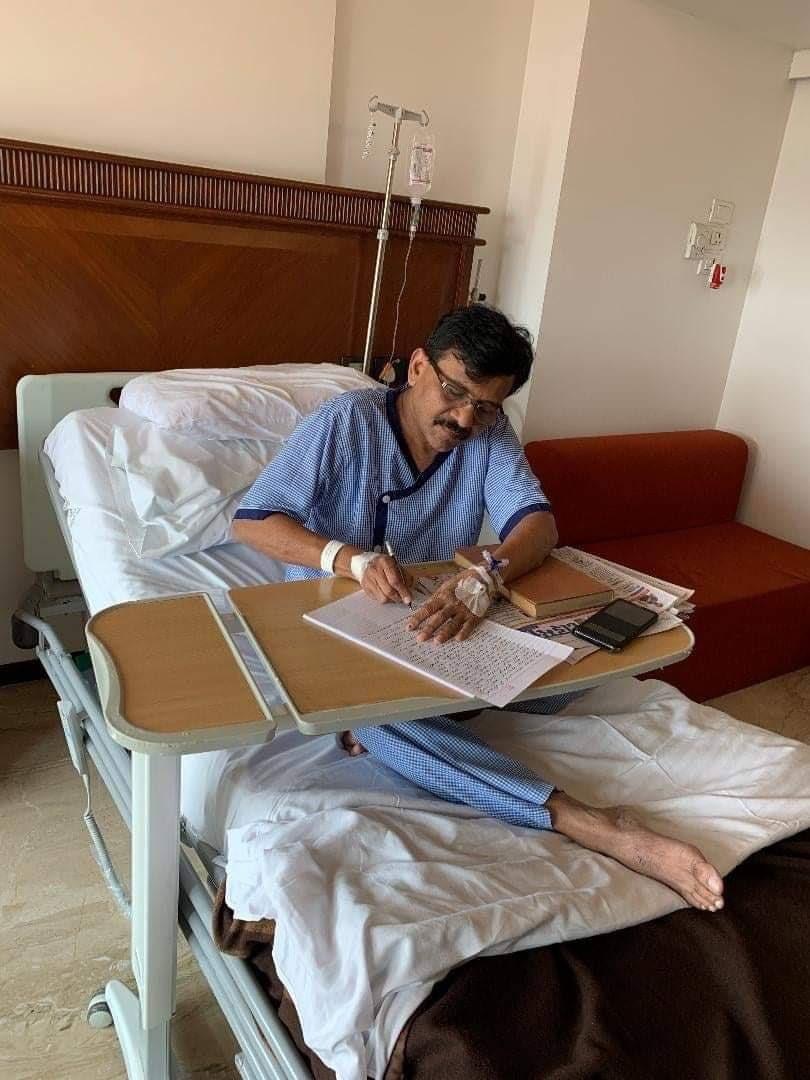 NCP leader Ajit Pawar says it will be hard to prove majority today.

Congress did not give its letter of support at the insistence of NCP Sharad Pawar who he said had asked the party to wait for one more day.

Senior Congress leaders K C Venugopal and Mallikarjun Kharge, who were supposed to come to Mumbai on Tuesday to discuss modalities of support to the Shiv Sena for government formation in Maharashtra, have deferred their visit, a Congress leader said.

The two leaders postponed their visit after NCP chief Sharad Pawar conveyed that state leaders of both the parties will first discuss the “terms and conditions” of government formation, former Maharashtra Congress president Manikrao Thakare said.

An exciting political Dahi Handi is underway in Maharashtra... let’s see who breaks and scores !

Kagda Chandya Padvi, Congress leader from Maharashtra: Process is still underway,but end result will be positive. Personally I think the three (Shiv Sena-Congress-NCP) parties will form the Govt and a Shiv Sena leader will be the CM.

NCP Chief Sharad Pawar on being asked if there is a delay on part of Congress: I will talk to the Congress.

Congress has no moral responsibility to form a govt in Maharashtra. Putting any blame on us for the instability is meaningless.
Its the failure of BJP and ShivSena which has brought the state on the doorstep of President rule.

Top Congress leaders, who were supposed to visit Mumbai have cancelled their visit. State Congress leaders will now hold discussions with NCP at a meeting dcheduled around 4 pm in Mumbai.

It’s official! The Shiv Sena’s exit from the NDA took a irreversible turn with President ram Nath Kovind accepting Arvind Sawant’s resignation on Tuesday. According to an official statement, “The President of India, as advised by the Prime Minister, has accepted the resignation of Shri Arvind Ganpat Sawant from the Union Council of Ministers, with immediate effect, under clause (2) of Article 75 of the Constitution.”