The Bharatiya Janata Party (BJP) on Saturday released the second list of candidates for the upcoming Odisha Assembly Elections. Odisha which will go for a simultaneous poll along with Lok Sabha in four phases beginning from April 11. The second list has the names of 22 candidates. The list was released by the party following the BJP's Central Election Committee meeting in New Delhi which was attended by Prime Minister Narendra Modi, Rajnath Singh, Arun Jaitley, Sushma Swaraj and Nitin Gadkari among others. On Thursday, the BJP announced candidates for 99 of the 147 Assembly seats.
a
Odisha Assembly Elections: Here is the list of 22 candidates 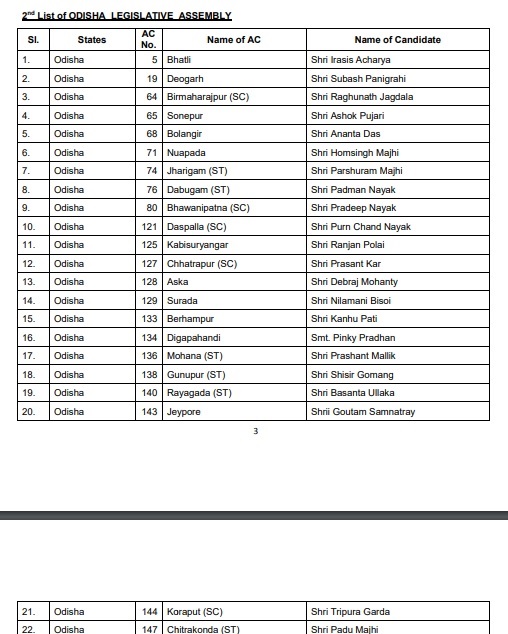 The BJP, which has set a 120-plus mission for Odisha, has fielded many new entrants who joined the BJP after resigning either from the ruling Biju Janata Dal headed by Chief Minister Naveen Patnaik or the Congress.
Congress MLA from Salipur Prakash Behera, who too joined the BJP recently, has been named as the party's candidate from his own constituency.

BJP's state general secretary Prithviraj Harichandan will contest from Chilika assembly segment, while Padmapur MLA Pradeep Purohit has been re-nominated from the seat.

Leader of the BJP Legislature Party KV Singhdeo will contest from his Patnagarh assembly segment, while his wife Sangeeta has been named as a BJP candidate to contest from Bolangir Lok Sabha seat.