Budget 2020: Wanted To Place Money In Hands Of People- What Nirmala Sitharaman Said In Her Speech

Union Budget 2020: Today marks the biggest test of Union Finance Minister Nirmala Sitharaman as she will present the toughest budget in over last 10 years. The Economic Survey tabled yesterday showed that the Indian economy has already bottomed out. While there was a hint at a robust rebound, the immediate concern is how Sitharaman will boost the government spending. From realty to auto, from FMCG to steel, almost all sectors are eyeing possible relief measures by the Modi government. The main concern is to make sure the Indian economy is back on track. Recently, the International Monetary Fund (IMF) lowered India’s economic growth forecast to 4.8 per cent for this fiscal year owing to the crisis in the non-banking financial sector and weak rural demand. It also cut the world’s growth estimate and blamed the slowdown in India for its move.

So with all these concerns, India awaits with bated breath for the Union Budget 2020. Check LIVE updates here:

Budget 2020: For modernisation and buying new weapon systems, defence forces allocated Rs 1,10,734 crore which is Rs 10,340 crore more than what was provided in last year’s budget.

Union Minister of Commerce & Industry Piyush Goyal: "Rahul Gandhi didn't seem very enthused with the budget, if he has any issue-based questions I can answer them, but if he only wants to use adjectives, I'm seeing 10 times better adjectives that are positive on the television."

Piyush Goyal: "If a small part of Life Insurance Corporation (LIC) goes to the public it will increase transparency and accountability, after all, it is public's property, I don't think there is any harm if a small part of it is with the people."

"It is a balanced Budget which prepares India for the decade ahead of us and prepares it to be a 5 trillion dollar economy. It also covers a vast canvas both on the social side, on economic development amd ensures that we continue to remain an economic powerhouse," says Piyush Goyal.

Union Min Piyush Goyal: It is a balanced Budget which prepares India for the decade ahead of us &prepares it to be a 5 trillion dollar economy. It also covers a vast canvas both on the social side, on economic development&ensures that we continue to remain an economic powerhouse. pic.twitter.com/1PLgYVoC1D

Finance Minister Nirmala Sitharaman: "I agree that my budget speech was lengthy but in the speech, I had focussed on and spoken about the schemes for employment for the youth, as well as benefits to them."

"Corporate tax cut and benefit derived by new companies, as well as improved GST collections will improve revenue generation & give the comfort to bring down fiscal deficit next year, with disinvestment too improving," says Sitharaman.

"To improve consumption demand, private investment and public spending and since revenue side could not be pressed further, without violating FRBM (Fiscal Responsibility and Budget Management), we had to relax fiscal deficit target by 0.5%," says Nirmala Sitharaman.

Introduction of taxpayer charter is a major step, in line with our commitment to ensure honest taxpayers are respected, it is an article of faith for us, says Sitharaman.

For the real estate sector, we have actually given something much more than what was announced even before the budget, says Finance Minister.

We wanted to place money in the hands of the people, particularly the middle class and lower middle classes, says Sitharaman.

Sitharaman clears air over now I-T sops, says those who want to take benefits of exemptions can remain in the old Income Tax regime

Intention is to reduce the rates and simplify the structure, says Sitharaman.

Didn't see any idea that would help youth get jobs, says Rahul Gandhi

Nominal cess to be imposed on import of some medical equipment, says Sitharaman.

Toys and footwear set to be costlier as Sitharaman announces increase in import duty.

Under Vivad Se Vishwas Scheme, taxpayer to pay only amount of disputed tax, will get complete waiver on interest and penalty, if scheme is availed by March 31, 2020

To ease allotment of PAN, new process of instantly allotting PAN through Aadhaar will be brought, says Sitharaman

Estimated nominal growth of GDP for 2020-21 at 10 per cent, says Nirmala Sitharaman

Govt to sell part of its holding in LIC, says Sitharaman.

Specified categories of government bonds to be open to NRIs, announces Sitharaman.

Govt proposes to increase investment limit of FPIs in corporate bonds from 9 per cent to 15 per cent, says Sitharaman.

Our govt remains committed to taking measures to ensure that our taxpayers are free from tax harassment of any kind, says Sitharaman.

Wish to enshrine in the statute a taxpayers' charter through this Budget for the first time, says Sitharaman.

Rs 85,000 crore for Scheduled Castes and other backwards announced by Sitharaman.

1,150 trains to be run in PPP mode, also 4 stations to be redeveloped with help of private sector, says Sitharaman.

Accelerated development of highways to be undertaken, says Finance Minister

I propose to monetise at least 12 lots of highway bundles of over 6,000 km before 2024, says Sitharaman.

Sitharaman says govt considering proposal to set up solar power facilities next to railway lines along with national logistics policy.

I propose to provide Rs 27300 crore for development for industry and commence for year 2020-21, says Sitharaman.

Krishi Udaan to be launched by Civil Aviation Ministry to transport agri-products to national as well international destinations, announces Sitharaman. 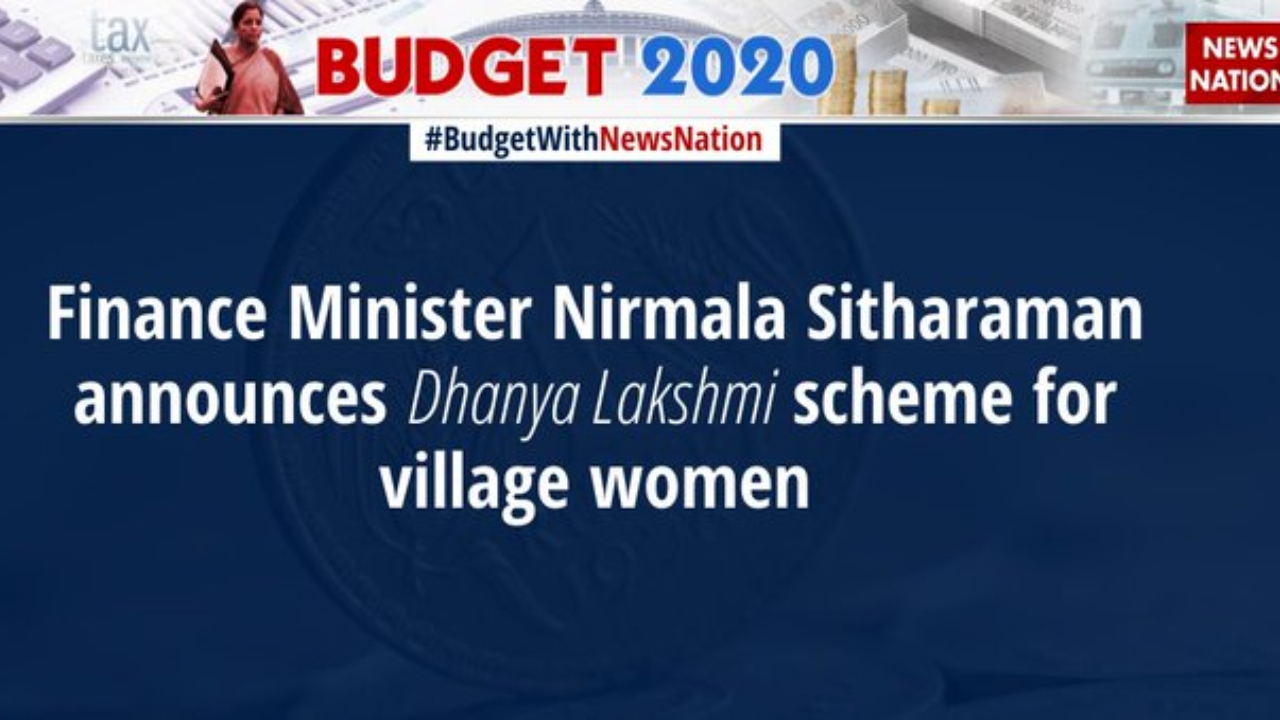 ICMYI – Traders, take note- Simplified return for GST has been announced from April 2020.

“Farm markets need to be liberalised, farming need to be made more competitive, handholding of farm-based activities need to be provided, sustainable cropping patterns and more tech needed,” says Sitharaman.

Sitharaman lays out roadmap for Budget – ‘Aspirational India’; ‘Economic Development for All’; 'Ours shall be a caring society.’

With eye on ‘agri stress’, Sitharaman says Modi government is committed to doubling farmers' income by 2022.

A nod to Article 370? Sitharaman recites a Kashmiri couplet

40 crore returns have been filed and 800 crore invoices have been uploaded, Sitharaman says.

Hailing the landmark GST regime, Sitharaman says, ‘consumers have got a annual benefit of 1 lakh crore rupees by GST.’ 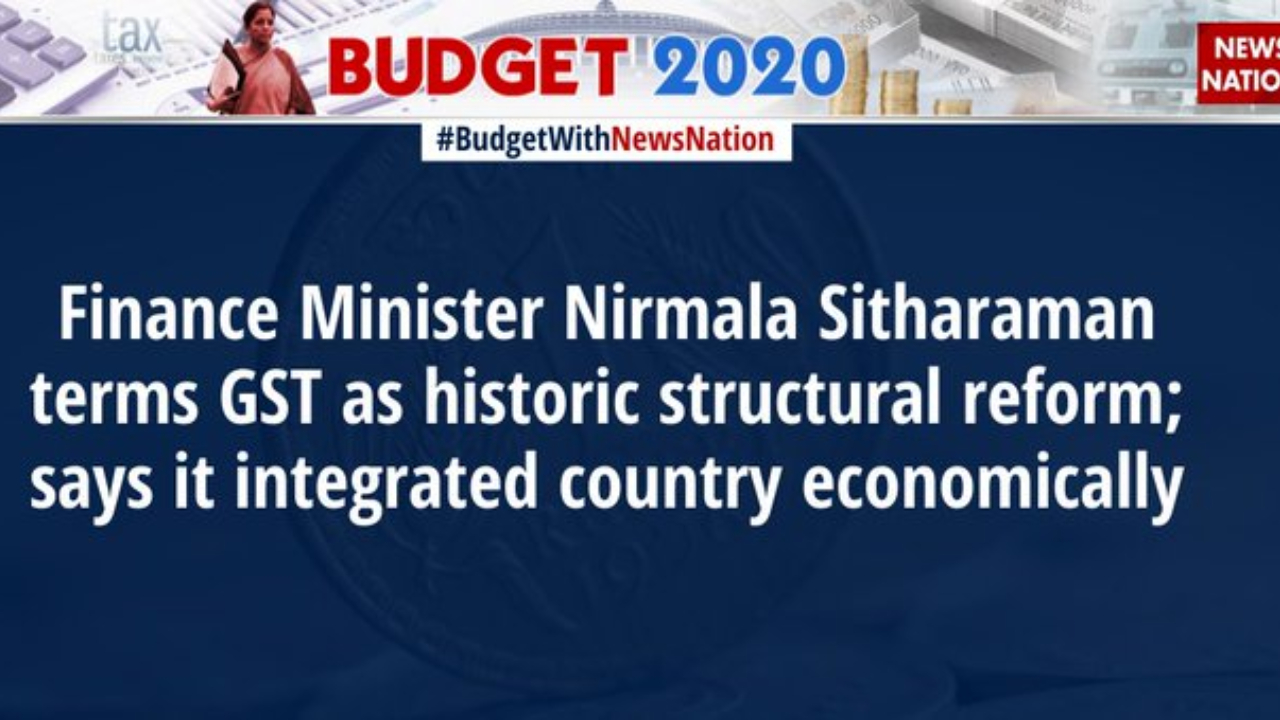 Soft budget in offing? Looks like the tone is set for more people-friendly framework to boost markets confidence.

Sitharaman opens her Budget speech with a mention of the bumper mandate of 2019 Lok Sabha polls.

Union Finance Minister Nirmala Sitharaman presents her 'do or die' Budget. This is the second Budget of Modi government.

As Sitharaman readies for ‘do or die’ budget, her family arrives at Parliament to lend support. See pic

“We need to treat the causality not the symptoms - hope #Budget2020 takes this approach. Wealth creation is a key part of our economic immune system! Waiting eagerly to hear Finance Minister,” Shaw tweeted.

India Inc is closely watching what Sitharaman has to offer. Industrialist Kiran Mazumdar Shaw says that, “Our economic cancer needs immunotherapy not chemotherapy.”

The printed copies of the Union Budget have arrived at Parliament. Though the tradition continues, the number of copies are much lesser this year. 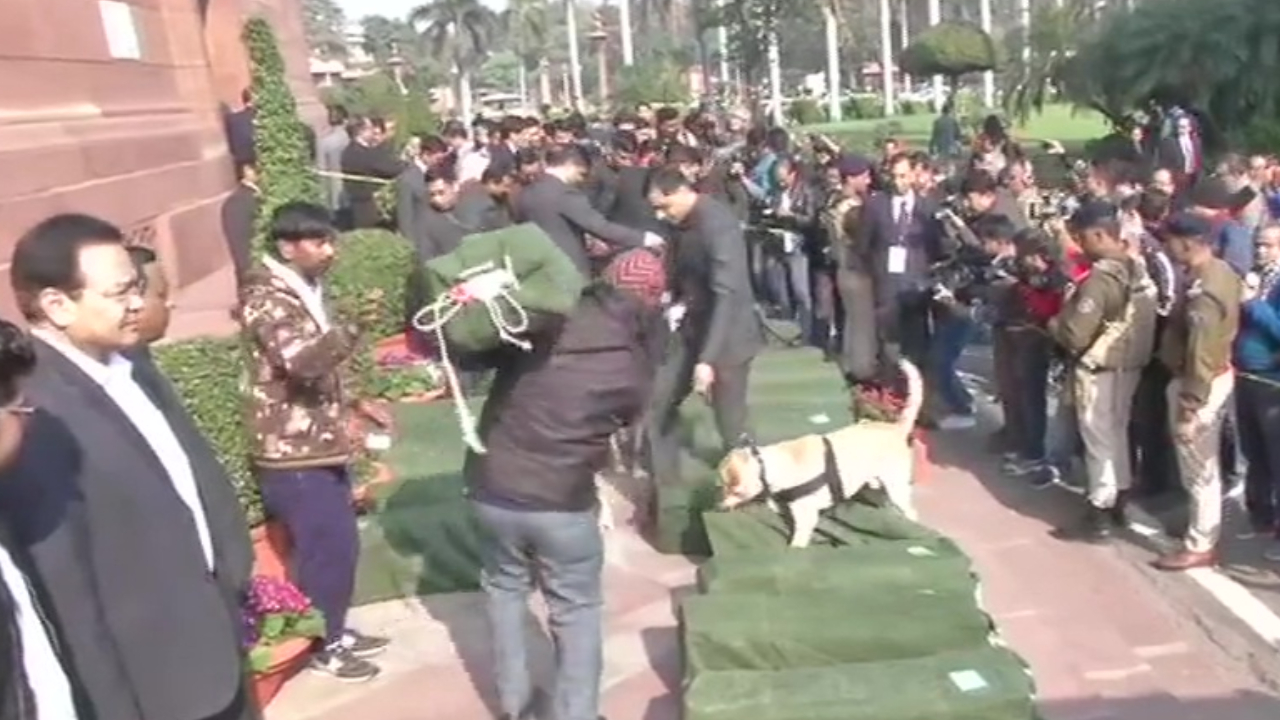 Look at all the camera flashes! 48 minutes to go before make or break Budget!

Nirmala Sitharaman arrives at Parliament, to present Union Budget at 11 am.

As per tradition, Finance Minister Sitharaman calls on President Kovind at Rashtrapati Bhavan before presenting the Union Budget.

As per tradition, Finance Minister @nsitharaman calls on President Kovind at Rashtrapati Bhavan before presenting the Union Budget. pic.twitter.com/JLEbSxNhAe

Presenting the 'Team Sitharaman' on B-Day 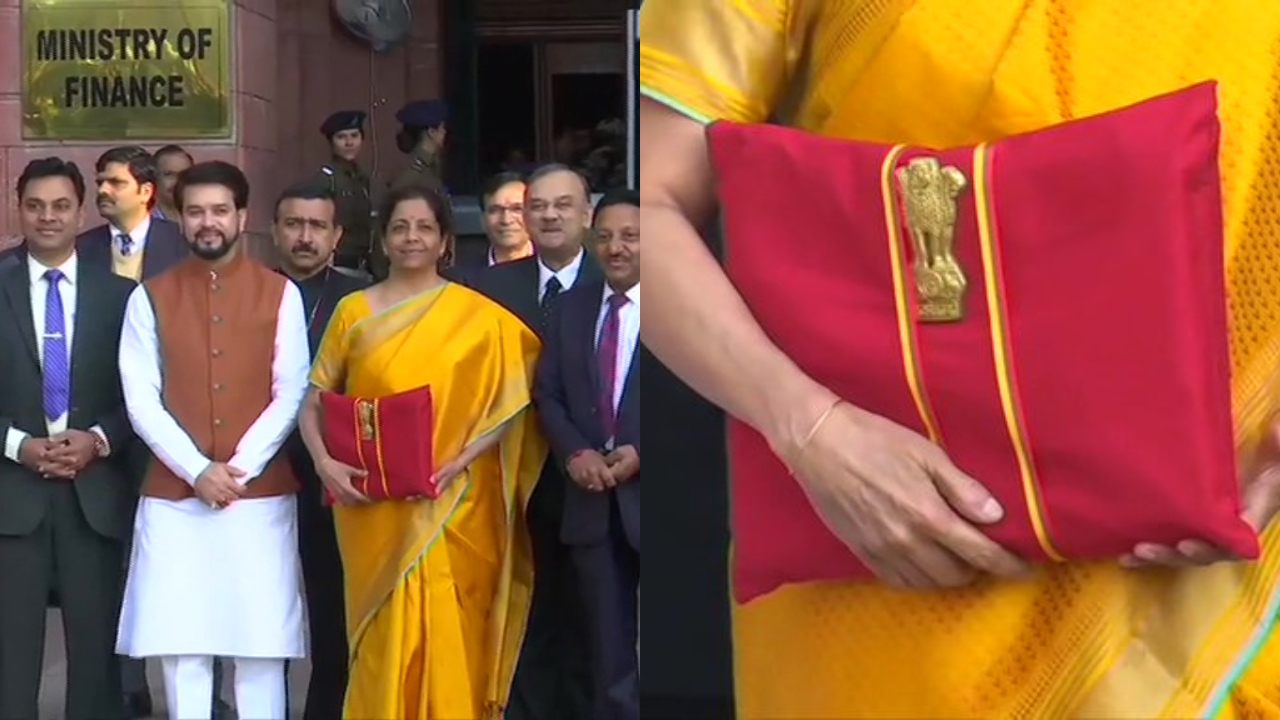 Dressed in mustard yellow, Nirmala Sitharaman seen in a beautiful silk saree as she arrives at the Finance Ministry. 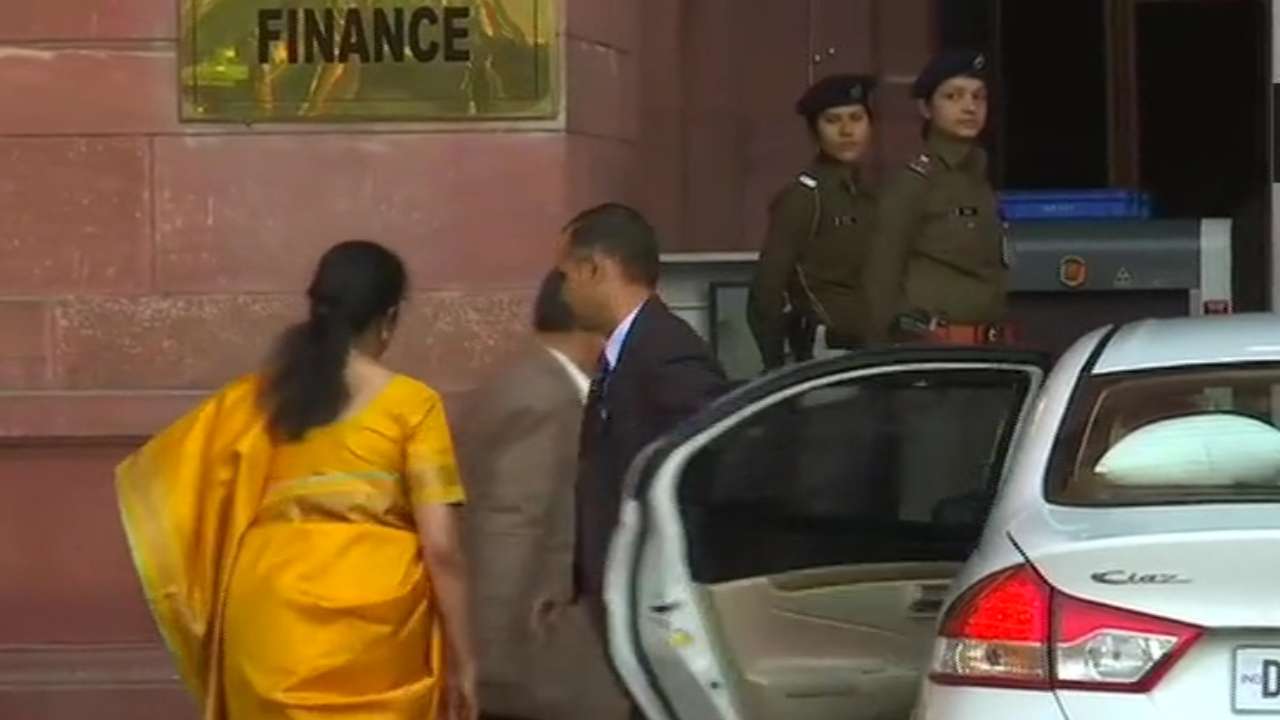 Junior Finance Minister Anurag Thakur is performing ‘pooja’ at his place. He will leave for the ministry shortly.

Ahead of Budget, there’s a good news for Modi government that may spell some relief. GST collections are out for January and it looks good.

In 2015, stock exchanges were open for trading on February 28, Saturday, when then Finance Minister Arun Jaitley had presented the Budget.

This is not the first time that the markets will operate on a Saturday.

Trading would be conducted during normal hours from 9 am to 3.30 pm.

Important note for investors - Stock exchanges will be open today but mutual funds are closed for subscription and redemptions.

On Friday, the Economic Survey projected revival of economic growth to 6-6.5 per cent in the next fiscal from 5 per cent estimated in 2019-20.