As Part Of The Ritual, 'halwa' Is Prepared In A Big 'kadhai' (large Frying Pot) And Served To The Entire Staff In The Ministry.

"Halwa ceremony marking the commencement of Budget printing process for the General Budget 2019-20 was held in North Block here today afternoon in the august presence of the Union Minister of Finance & Corporate Affairs, Nirmala Sitharaman," according to a Finance Ministry statement said.

What is Halwa ceremony?

As part of the ritual, 'halwa' is prepared in a big 'kadhai' (large frying pot) and served to the entire staff in the Finance Ministry.

Significance: Soon after after the sweet dish is served, a large number of officials and support staff, who are assigned with the Budget making and printing process, are are locked up inside a basement in North Block of the ministry and remain cut off from their families till the presentation of the Budget in the Lok Sabha. They are not even allowed to contact their near and dear ones through phone or any other form of communication, like e-mail. Only very senior officials in the finance ministry are permitted to go home. 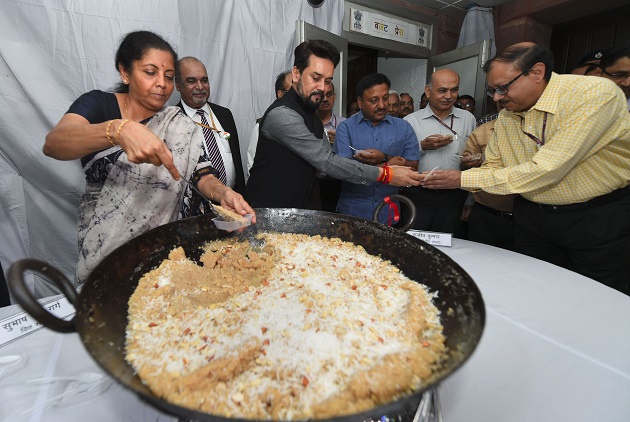 Blue Sheet: The hundreds of pages associated with the budget document are printed around a blue piece of paper, known as 'Blue Sheet', which contains some key numbers and, therefore, need to be guarded. Keeping in mind the secrecy level, the Finance Minister is not even allowed to keep the paper, the custody of which is given to the joint secretary of budget only. The secret sheet is updated as soon as the new data comes in and forms the backbone of the whole budget process.

Until 1950, budget papers were printed inside Rashtrapati Bhavan. However, after a leak during the same year, printing venue was moved to a government press in Minto Road. Ever since 1980, the basement in North Block has become the unchanged dugout for budget printing. Notwithstanding the confinement, being part of the budget-making process is apparently the most sought-after job among the finance ministry staff.

While many wonder if the level of secrecy is still warranted at a time when all major government announcements including the GST tax rates have not been part of the budget, the meticulous secrecy is a British legacy just like the budget briefcase used by the Finance Minister on the budget day.

The NDA government would on July 5 unveil the full Budget for 2019-20. On February 1, the government had presented an Interim Budget to take Parliament nod for spending till the new government takes charge after the general elections.