In The View Of Poor Response From Applicants To The Bulk Of Flats Being Located In Narela, The DDA Has Also Approved A Proposal To Reduce The Cost Of EWS Flats In The Area, By Up To 40 Per Cent Of The Construction Cost.

The draw for the DDA Housing Scheme 2019, the new online plan of the Delhi Development Authority (DDA), for about 50,000 applicants, will be held tomorrow, i.e. July 23, 2019. A statement has been issued by the DDA in this regard, notifying the date, time and the venue of the event for the registrants.

"The draw for allotment of flats to the registrants of DDA Housing Scheme is scheduled to be held on 23.07.2019 at 12:00 Noon onwards at Conference Hall, B-Block, Ground Floor, Vikas Sadan, INA, New Delhi- 11002. The draw will be based on random number generation system and will be held in the presence of Hon'ble Judges and Senior Officers of DDA," the press release said.

"We request you to kindly attend the same or depute your representaive along with cameraman/crew to cover the same," it added. 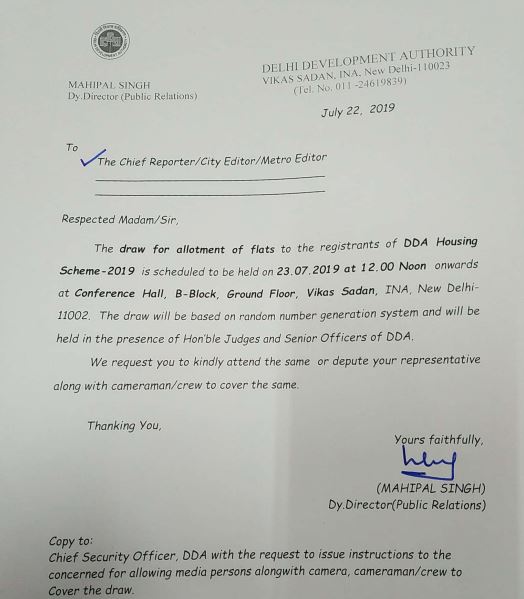 The date for registration with the DDA Housing Scheme was expired on June 10, 2019. Application forms were made available online on websites of 13 empanelled banks. From application to verification - all the formalities have been conducted online. Earlier, the registration process was scheduled to close in May, but was extended by up to one month.

READ | DDA Housing Scheme 2019: Cost of flats reduced up to 40 per cent, check your eligibility here

While people from the economic weaker section (EWS) category had to pay Rs 25,000 for the DDA application form, the amount fixed for the LIG and MIG category were Rs 1 lakh and Rs 2 lakh respectively. The application fee for HIG flats was the same as MIG category.

In the view of poor response from applicants to the bulk of flats being located in Narela, the DDA has also approved a proposal to reduce the cost of EWS flats in the area, "by up to 40 per cent of the construction cost".

The modified rates would apply to allottees of the current scheme. In case of leftover flats, it would be re-advertised soon at reduced rates. This will make these flats available at concessional rates to the economically weaker section.

Following the draw of lots for the scheme, the authority is expected to start allotting the flats from late July. Under the scheme, the DDA had also facilitated shuttle bus service from Jahangirpuri Metro Station to Narela every Saturday, Sunday and on public holidays. However, these arrangements were valid until the scheme was operational.

For more details the applicants are advised to keep a tab on the official website of the DDA Housing Scheme that is - dda.org.in.