Jet Airways employees take out candle march near Jantar Mantar, appeal to lenders to 'save' airline

This Is The Second Time In As Many Weeks Jet Airways Employees Gathered At Jantar Mantar After The Temporary Suspension Of The Airline's Operations On April 17.

Over 200 employees of Jet Airways took out a candlelight march near Jantar Mantar, located in the modern city of New Delhi, appealing to the lenders of the airline and the Centre to "Save Jet Airways". The employees were carrying placards with slogans such as "Save Jet Airways, Save Our Future" and "We have dependents to feed, please don't let 9W bleed". 9W is the code for Jet Airways like 6E is for IndiGo.

Majority of the employees, including engineers, flight crew and cockpit crew, took part in the march wearing the airline's uniform. The wives and children of some of the employees were also present.

"The senior management of Jet Airways met Finance Minister Arun Jaitley and other senior officials of the government and apprised them of the grave situation being faced by the airline. We were assured that the government would do the best to ensure betterment of the employees and the company but it is sad that nothing has been done," a statement issued by the employees said. 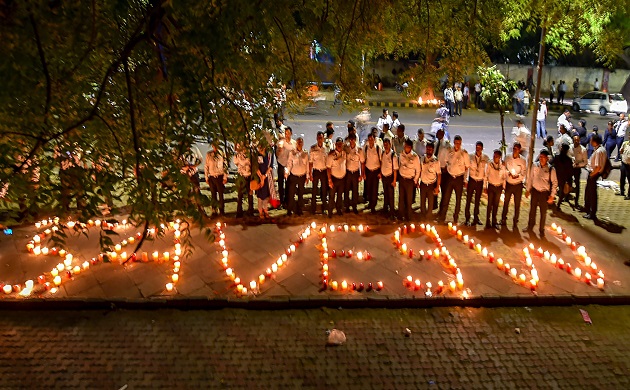 Flight engineer D Mahapatra alleged that all the slots of Jet Airways were allotted to other airlines in a non-transparent and biased manner. "When the government could rescue other airlines, then why not Jet Airways?" he asked.

The employees had not been paid for four months now, senior engineer Mohan Sharma said, adding that the salaries of October, November and December last year were also paid in instalments.

This is the second time in as many weeks Jet Airways employees gathered at Jantar Mantar after the temporary suspension of the airline's operations on April 17. The lenders of Jet Airways, which are currently managing the airline, have till date refused to provide funds for restarting the operations.