Sitharaman Last Week Had Announced A Raft Of Measures, Including Rollback Of Enhanced Super-rich Tax On Foreign And Domestic Equity Investors

Union Finance Minister Nirmala Sitharaman will be addressing a press conference at 4pm. The presser comes just before the Central Statistics Office will release the Gross Domestic Product (GDP) growth numbers. Sitharaman last week had announced a raft of measures, including rollback of enhanced super-rich tax on foreign and domestic equity investors, exemption of startups from 'angel tax', a package to address distress in the auto sector and upfront infusion of Rs 70,000 crore to public sector banks, in efforts to boost economic growth from a five-year low.

Earlier, RBI said in a statement had said that the board decided to transfer a sum of Rs 1,76,051 crore to the Government of India comprising Rs 1,23,414 crore of surplus for the year 2018-19 and Rs 52,637 crore of excess provisions identified as per the revised Economic Capital Framework (ECF).

5.28 pm: I am not going to comment on remarks from Congress because if bank frauds became an assumption for the Indian citizen it is because of the Congress party. Many of these fugitives we are trying to get back were encouraged during their time, says Nirmala Sitharaman.

5.20 pm: Finance Secretary Rajeev Kumar: In amalgamation process, no.of banks have been brought down to 12 from 27. There has been no retrenchment so far, there is no chance of retrenchment. The benefits of employment & HR will improve, with amalgamation the best combination will be taken up.

5.15 pm: No jobs to be lost due to bank mergers: Nirmala Sitharaman 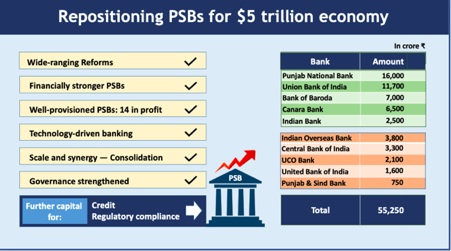 5.05 pm: Staff should be dedicated at the branch level to make sure last Friday’s announcements are implemented and this consolidation is smoothly applied, says says Nirmala Sitharaman. 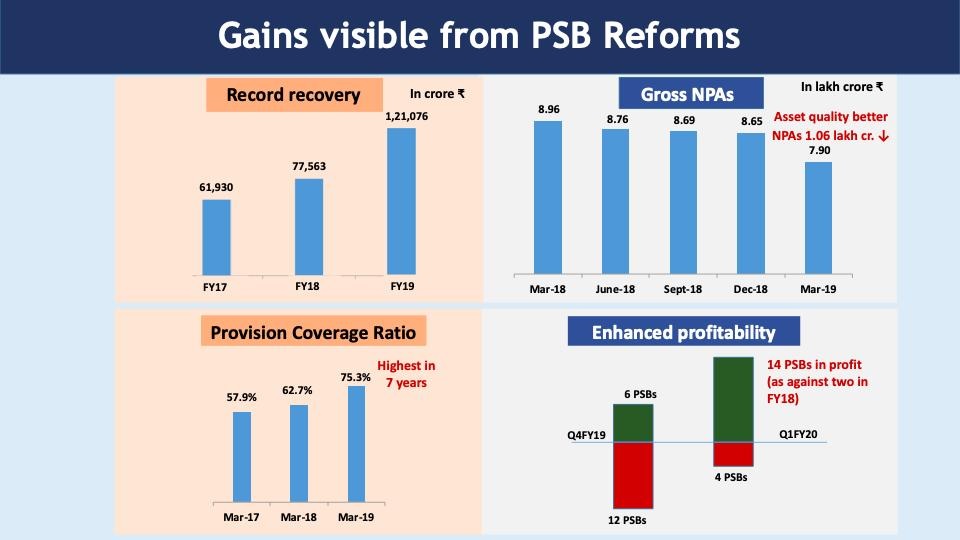 4.45 pm: No retrenchment has taken place post merger of Bank of Baroda, Dena Bank and Vijaya Bank; staff has been redeployed and best practices in each bank have been replicated in others: Union Minister Nirmala Sitharaman.

4.42 pm: 88 percent of PSB business will be with the newly merged banks.

4.37 pm: Canara bank and Syndicate Bank are to be merged: FM Nirmala Sitharaman

4.30 pm: 4 NBFCs have found their liquidity solutions through PSBs since last Friday with more in pipeline Indian Economy is $2.6 trillion of which $1.9 trillion is credit: Union Minister Nirmala Sitharaman

4.28 pm: Specialised agencies have been set up who are monitoring every loan which is over Rs 250 crores.

4.25 pm: Several new processes have been implented in the banking sector to avoid frauds: Nirmala Sitharaman

4.25 pm: "We need to lay a strong foundation for financial sector. We need to bring about banking reforms, as we have done in the previous years," says Nirmala Sitharaman.

4.23 pm: Early signal warning reading being implemented for every loan which is over Rs 250 crore, says Nirmala Sitharaman.

4.20 pm: 4 NBFCs are reaching out to public sector banks to provide the liquidity after my my previous announcement, says Nirmala Sitharaman.

4.15 pm: The banking sector will be the main focus of today's press conferrence, says Nirmala Sitharaman

4.10 pm: Finance Minister Nirmala Sitharaman had made several announcements to boost the Indian economy including enhanced surcharge on long-term/short-term capital gains arising from transfer of equity shares/units for foreign and domestic investors and angle tax on startups.

She also announced that the CSR violations wouldn't be treated as criminal offence. GST regime will be simplified further and all pending GST refunds will now be released within 30 days and future refunds will be paid within 60 days.