The Sum Spent On Trump's Grand Welcome Is Equivalent To About 1.5% Of The Annual Budget For The Home Ministry In Gujarat.

A man applies finishing touches to paintings of US President Donald Trump and PM Narendra Modi on a wall as part of a beautification along a route that Trump and Modi will be taking during Ahmedabad visit. (Photo Credit: Reuters Photo)

US President Donald Trump will inaugurate the world's largest cricket stadium when he arrives in Ahmedabad, the home base of Prime Minister Narendra Modi, on Monday at the start of a two-day visit aimed at smoothing ties strained by trade disputes. Making his first official trip to the world's largest democracy, Trump is also expected to visit the humble abode of India's independence hero Mahatma Gandhi in Ahmedabad. The leaders of China, Japan and Israel have all visited Ahmedabad since Narendra Modi became prime minister.

Authorities in Ahmedabad expect to spend around 800 million to 850 million Indian rupees ($11-12 million) on preparations for the visit by the American president that is likely to last around three hours, two government officials with direct knowledge of the plans told Reuters.

The sum is equivalent to about 1.5% of the annual budget for the home ministry in Gujarat. Security-related costs, with more than 12,000 police officers expected to be deployed, will account for almost half the expense, said the officials, who declined to be named as they are not authorised to speak publicly about the visit. 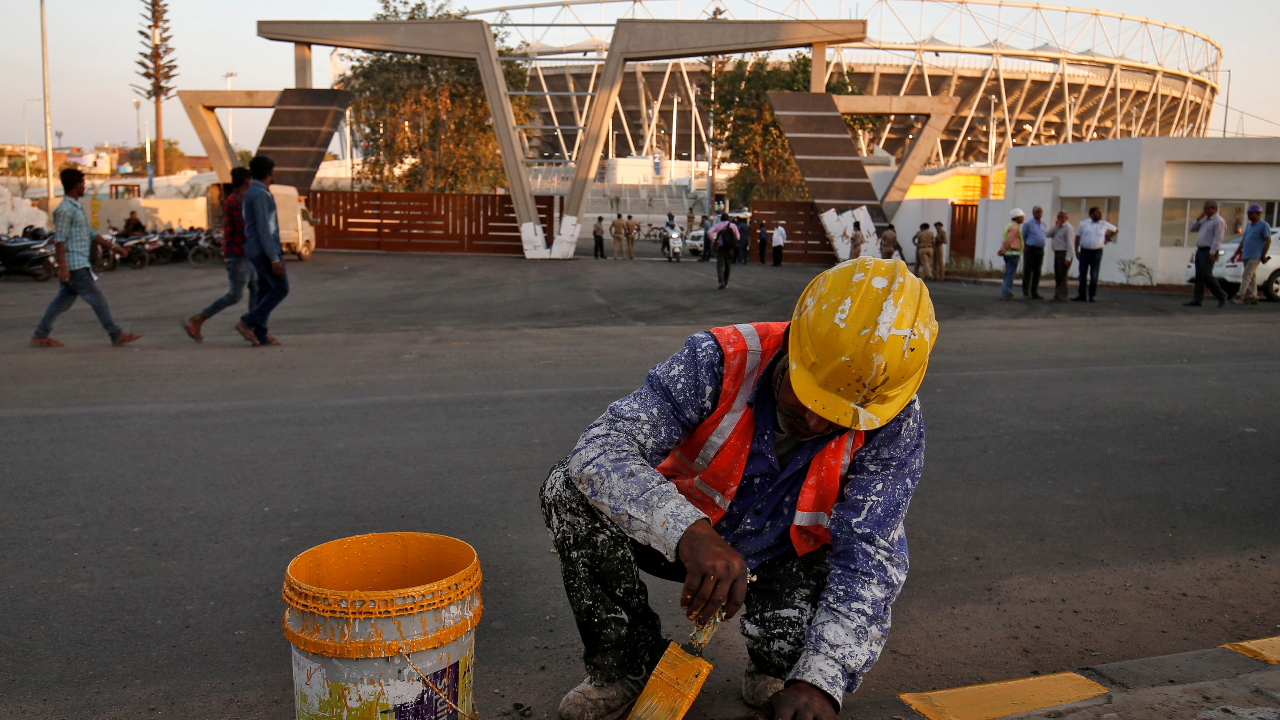 A worker paints footpath in front of Sardar Patel Gujarat Stadium, where US President Donald Trump is expected to visit during his upcoming trip to India, in Ahmedabad. (REUTERS)

With capacity for 110,000 spectators, the Motera Stadium will dislodge the Melbourne Cricket Ground as the world's largest cricket stadium. "Eighteen roads of about 20 kilometers (12 miles) in length from Ahmedabad Airport to Motera Stadium have been widened or re-laid," Nehra said, adding that the improvements had been planned before Trump's visit was confirmed.

A further 60 million Indian rupees ($840,000) will go on "beautification" of the city, said Nehra, including erecting the wall to spare Trump's view.

Ashok Brahmbhatt, secretary of Gujarat Cricket Association, which owns the Motera Stadium set to be opened by Trump, said it would also spend tens of millions of rupees during the event.

Nehra tweeted on Sunday that more than 100,000 participants had registered so far to greet Trump as he heads from the airport to the city centre. Trump said last week Modi had promised "millions and millions" of people would line his route.

Trump may also visit the famous Taj Mahal monument in the city of Agra, and all leave for police officers in that city has been cancelled, according to a document seen by Reuters.