What can be termed as a major setback for the Kamal Nath government, legislator Hardeep Singh Dang of the Congress party on Thursday resigned from the Madhya Pradesh assembly amid political turmoil in the state. Dang was amongst the four Congress MLAs who went missing earlier. In the letter, Hardeep Dang said despite getting the people's mandate for a second time, he is constantly being ignored by the party. "None of the ministers are ready to work as they are part of a corrupt government," his letter read. 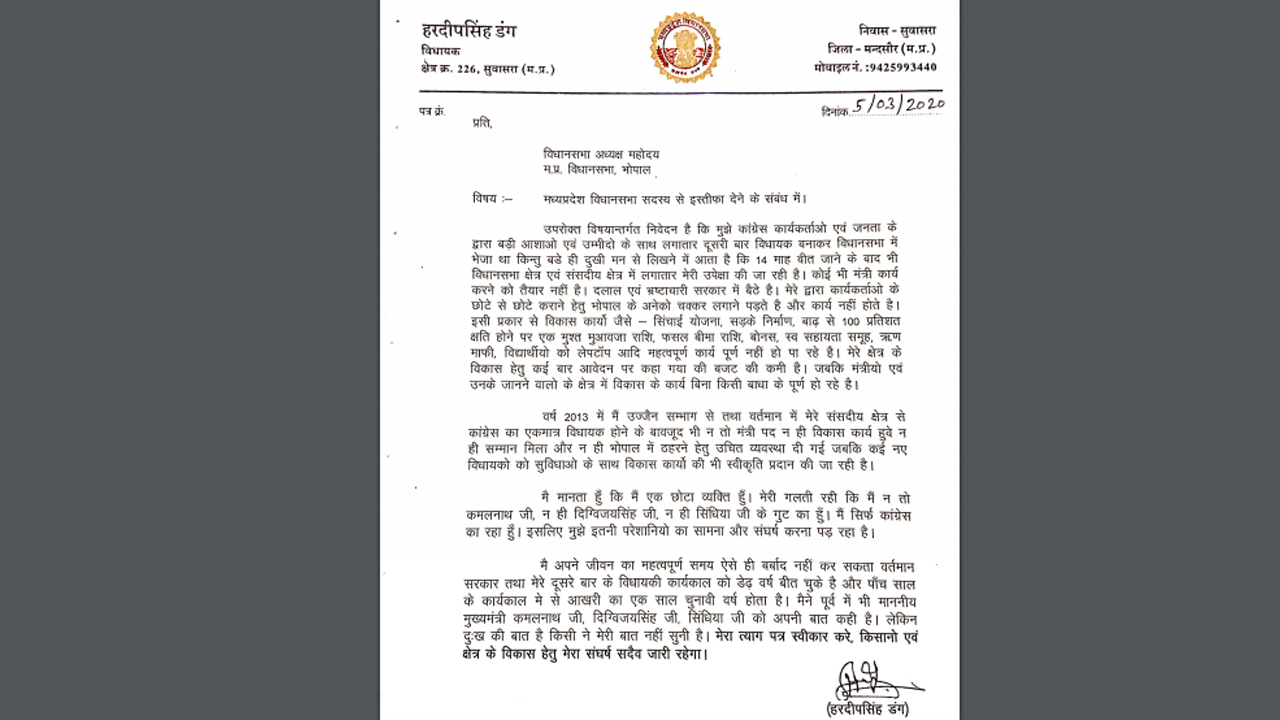 Reacting to Dang's resignation, Chief Minister Kamal Nath said, "I have received information about Hardeep Singh Dang's resignation. I have not yet received any letter from him or discussed the matter in person. Until I meet him personally, making comments over it will not be appropriate."

Earlier, Kamal Nath had said that the Congress government has an "absolute majority" and it has proved this in the state Assembly on a number of occasions. He said the BJP "faced defeat every time" and this time also, its plans will prove to be like "Mungerilal’s dream", referring to the famous fictional character from a television serial.

Nath also accused the BJP of plotting a conspiracy to come back to power in the state in an "undemocratic manner". His comments came after some Congress leaders accused the BJP of attempting to bring down his government in Madhya Pradesh using money and power.

"The Congress government has an absolute majority. We have proved this in the election of the Speaker, Deputy Speaker in the Assembly and also while passing the budget," Nath said in a statement.

"The BJP faced defeat every time and this time also its plans will prove to be like Mungerilal's dream," Nath said on the saffron party’s alleged attempts to topple his government.

He alleged that the BJP, along with mafias, has been unsuccessfully trying to destabilise the state Congress-led government for the past several days. "The land mafia, organised crime mafia, spurious drugs and adulteration, which were thriving since the last 15 years under the patronage of the BJP, are being effectively curbed," he said.

The campaign to make the state ‘mafia-free’ is not going down well with the BJP, the chief minister said. “On the strength of money power of these mafias, the BJP is plotting a conspiracy for coming back to power in an undemocratic manner. The BJP does not believe in democracy, they believe in conspiracy and money power,” he said.

Nath said it can be recalled that the BJP has done the work of “killing democracy and constitutional values” in many states, including Goa, Karnataka, Maharashtra, Haryana, and it is trying to replicate the same in Madhya Pradesh.

"We have full faith in all our MLAs, we have no doubt on their integrity, honesty. The truth of this blackmoney earned from corruption and scams has been revealed and all BJP’s conspiracies will fall flat on its face only," he added.