One Of The Questions In The Social Science Examination Of Class 10 Asked Candidates To Identify 'Azad Kashmir' On The Map. The Term Also Occurred In A Match-a-pair Question.

The opposition BJP hit out at the Congress government in Madhya Pradesh on the matter. (Photo Credit: ANI/ Twitter )

The National Commission for Protection of Child Rights (NCPCR) on Saturday sought explanation from the Madhya Pradesh Board of Secondary Education (MPBSE) on Pakistan Occupied Kashmir being mentioned as 'Azad Kashmir'Â in a Class 10 question paper. In a letter to MPBSE secretary, the Commission's chairman, Priyank Kanoongo, said prima facie this seems to be a criminal offence.

"You are requested to urgently investigate into this matter. The Commission may also be informed of the action taken against the person responsible in this matter," the letter said.

One of the questions in the Social Science examination of Class 10 asked candidates to identify 'Azad Kashmir' on the map. The term also occurred in a match-a-pair question. 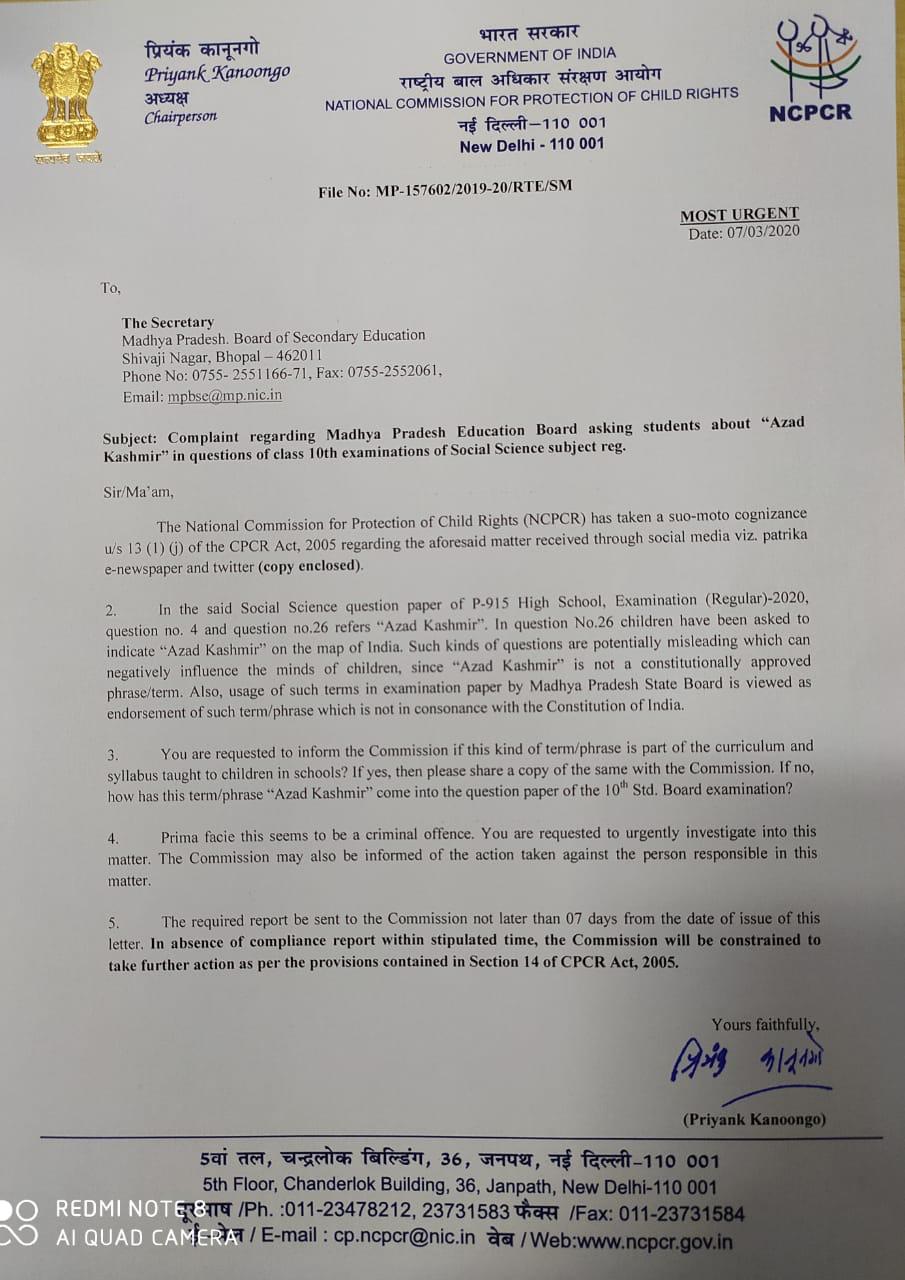 "Such kinds of questions are potentially misleading which can negatively influence the minds of children, since Azad Kashmir is not a constitutionally approved phrase or term," Kanoongo said.

"Also, usage of such terms in examination paper by the Madhya Pradesh State Board is viewed as endorsement of such phrases which is not in consonance with the Constitution of India," he added.

He sought an action taken report from the MPBSE in the matter.

"In absence of compliance report within stipulated time, the Commission will be constrained to take further action as per the provisions contained in Section 14 of CPCR Act, 2005, he said in the letter.

The opposition BJP hit out at the Congress government in Madhya Pradesh on the matter. Azad Kashmir is the term used by Pakistan to refer to POK.

After the controversy broke out, two officials were suspended on the directives of Chief Minister Kamal Nath, an MPBSE official said. The two questions were also cancelled.

Speaking to PTI, state BJP spokesperson Rajnish Agrawal, who shared image of the question paper on Twitter, said, "Kashmir is an integral part of India. The Indian government has passed a resolution to this effect. Has Madhya Pradesh's Congress regime recognized Azad Kashmir?"

He also alleged that senior Congress leaders use the "same terminology" as do Pakistan and separatists. He also demanded that a sedition case be registered against the person responsible for this gaffe.

An MPBSE official said the paper setter and the moderator were suspended and disciplinary action would be taken against them.

The questions in which the term Azad Kashmir figured were cancelled and the social science paper would thus carry 90 instead of 100 marks, he added.Â