Determined Mothers, Unfazed Children And Chants Of 'Azadi': An Evening In Shaheen Bagh

For The Last 28 Days, Hundreds Of People, Led By Women, Have Been Demonstrating At The Venue, Blocking A Key Road Which Links Noida To Delhi.

A major part of the crowd swells between 8 pm and 12 pm when the regular protesters are joined by working professionals and businessmen once they return from work. (Photo Credit: All photos by Aniruddha Dhar/ News Nation )

Barely a month after she was born, Mumtaz has found herself amid a strange gathering of mothers chanting “Azadi” and “Inquilab Zindabad” in the middle of the streets at South-East Delhi’s Shaheen Bagh, a venue which has been the epicenter of anti-Citizenship (Amendment) Act and National Register of Citizens (NRC) protest since December 15.

For the last 28 days, hundreds of people, led by women, have been demonstrating at the venue, blocking a key road which links Noida to Delhi. A major part of the crowd swells between 8 pm and 12 pm when the regular protesters are joined by working professionals and businessmen once they return from work.

Besides Delhi, protests have simmered in several parts of the country over the contentious law resulting into clashes at several places, including Uttar Pradesh, where more than 20 people have died so far.

On Friday, a thin tarpaulin sheet overhead the sit-in site has been barely able to keep the bone-chilling cold away, but the Delhi High Court's decision to not entertain a plea seeking directions for removal of the demonstrators from the site has fortified the spirit of the protesters. But challenges are far from over.

It is around 8.30 pm. Mumtaz, perhaps the youngest at the Shaheen Bagh protest site has dozed off in her mother’s lap, unaware that the controversial Act, which promises citizenship to only non-Muslim refugees from three neighbouring countries, has come into effect. “It’s not only about my daughter, it’s about the future of lakhs of children of this country whose fates would be decided by a piece of paper (documents). We will not let this happen,” says Nagma, the infant's mother. 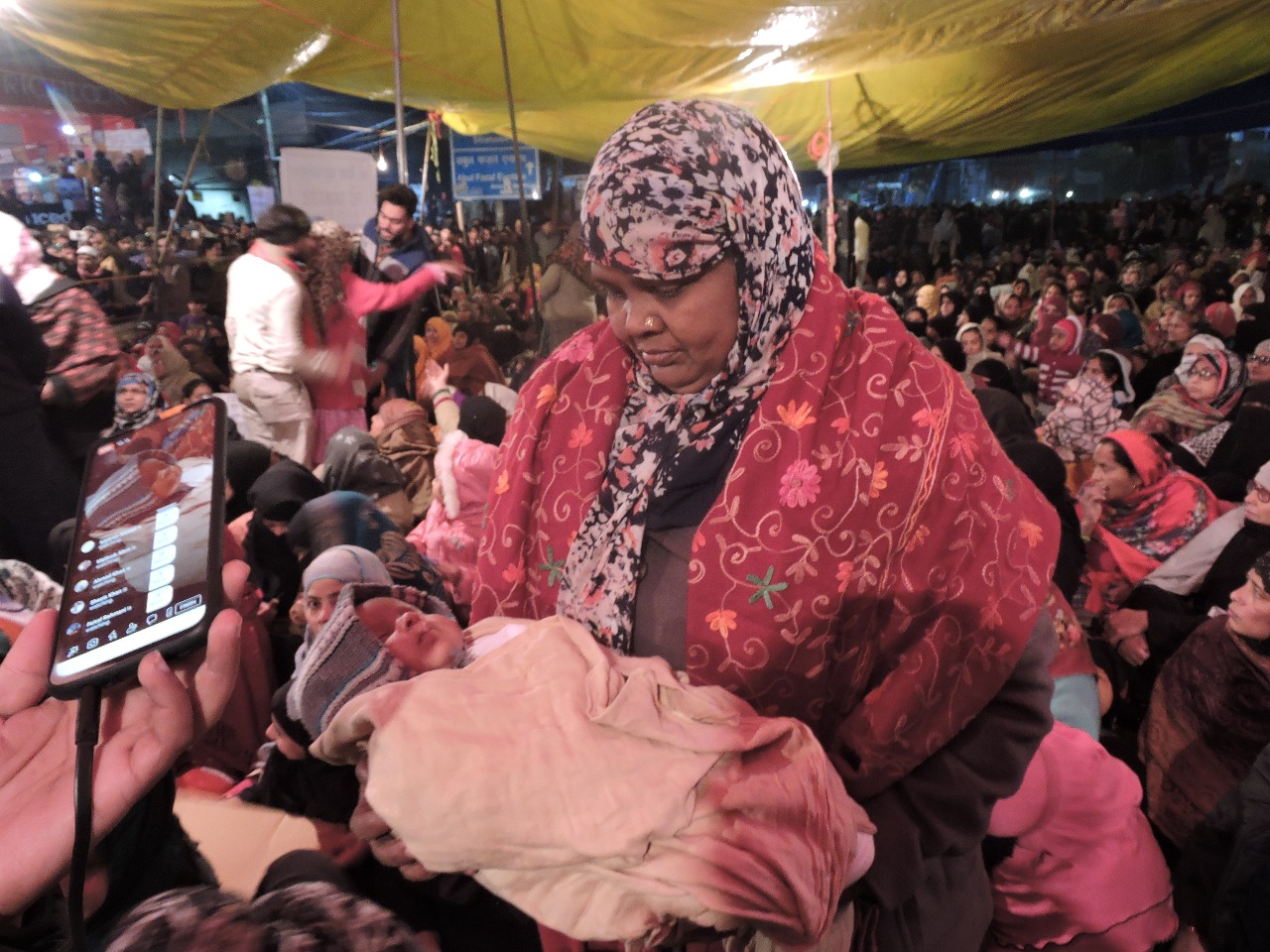 “Hum hasna bhul gaye hain. Modi ji, CAA wapas lijiye, humari hassi wapas kijiye (We have forgotten to smile. Modi ji, please roll back CAA and bring our smile back),” reads a poster that seven-year-old Reshma, who has joined the protest with her parents, has been copying the slogan sitting on a balcony of a shop across the road. Several children, none more than 10 years, have been painting placards and posters day and night as their mothers sit adamant denying to budge an inch till CAA is rolled back. 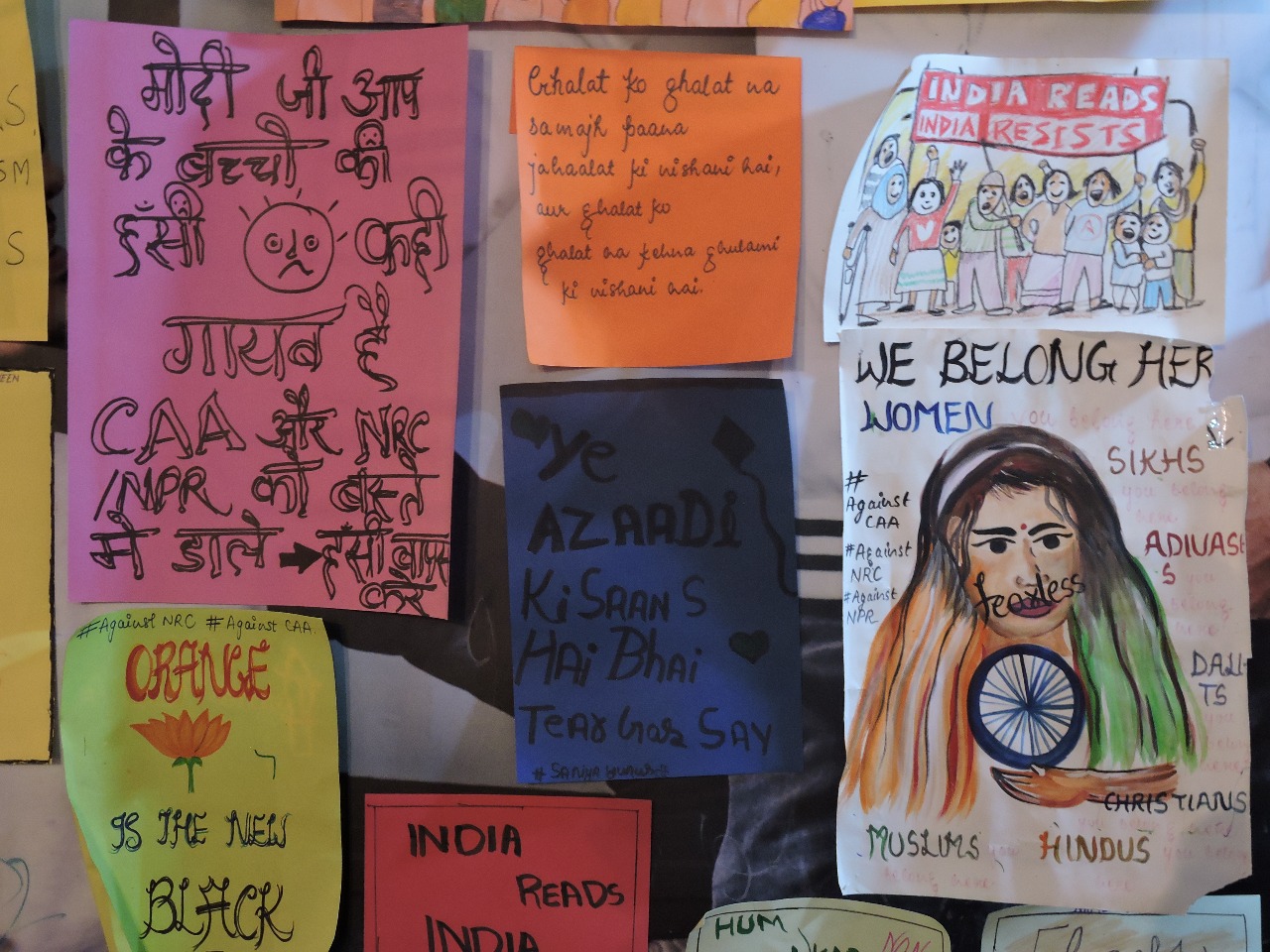 On the 28th day of the protest, septuagenarian Nurunissa rejects the ruling party’s rhetoric that the protesters have not understood what the law stands for and are being brainwashed by opposition parties. “Who says we don’t understand? It is our life and we know everything about it. They brought in demonetization, abrogated Article 370 in Jammu and Kashmir, then this verdict on Babri Masjid… (If they don’t roll back CAA then) we will not vote in the upcoming Delhi elections…,” she says.

Nurunissa, along with Mehrunissa, 50, and another 83-year-old woman is now famously known as the “Dabang Dadis” of Shaheen Bagh.

On a hunger strike for the last 11 days, Mehrunissa had decided to join the demonstration after students of Jamia Millia Islamia were allegedly beaten up by the Delhi Police on December 15. “Modi ji says ‘beti bachao, beti padhao’. Then how could they beat up girl students of the university,” she asks.

The Wazirabad-resident adds that several politicians have visited Shaheen Bagh in their individual capacities. “So far, we have not got any political commitment from anybody. If CAA and NPR are not scrapped, we will stay away from Delhi elections.”

Sharing the stage is 45-year-old Zainul Abidin, who is on a liquid diet since the protest began here. He remains at the centre stage demanding the withdrawal of the contentious legislation. In the past 28 days, Abidin has lost 21 kg. But not a single government doctor has met to him so far, he claims. “They call us terrorists. I want to ask them, who is a terrorist — the ones who are beating up students inside universities, or us, who are holding a peaceful protest here… Hunger strike is the best way to force the government to roll back the Act,” says Abidin, who claims to be a social activist.

The blaring of microphones, as a slew of politicians from different parties hold the main stage with almost similar demands, wakes Mumtaz up frequently. But the infant is now used to the crackle.

Show them the copy of Constitution: Manoj Jha 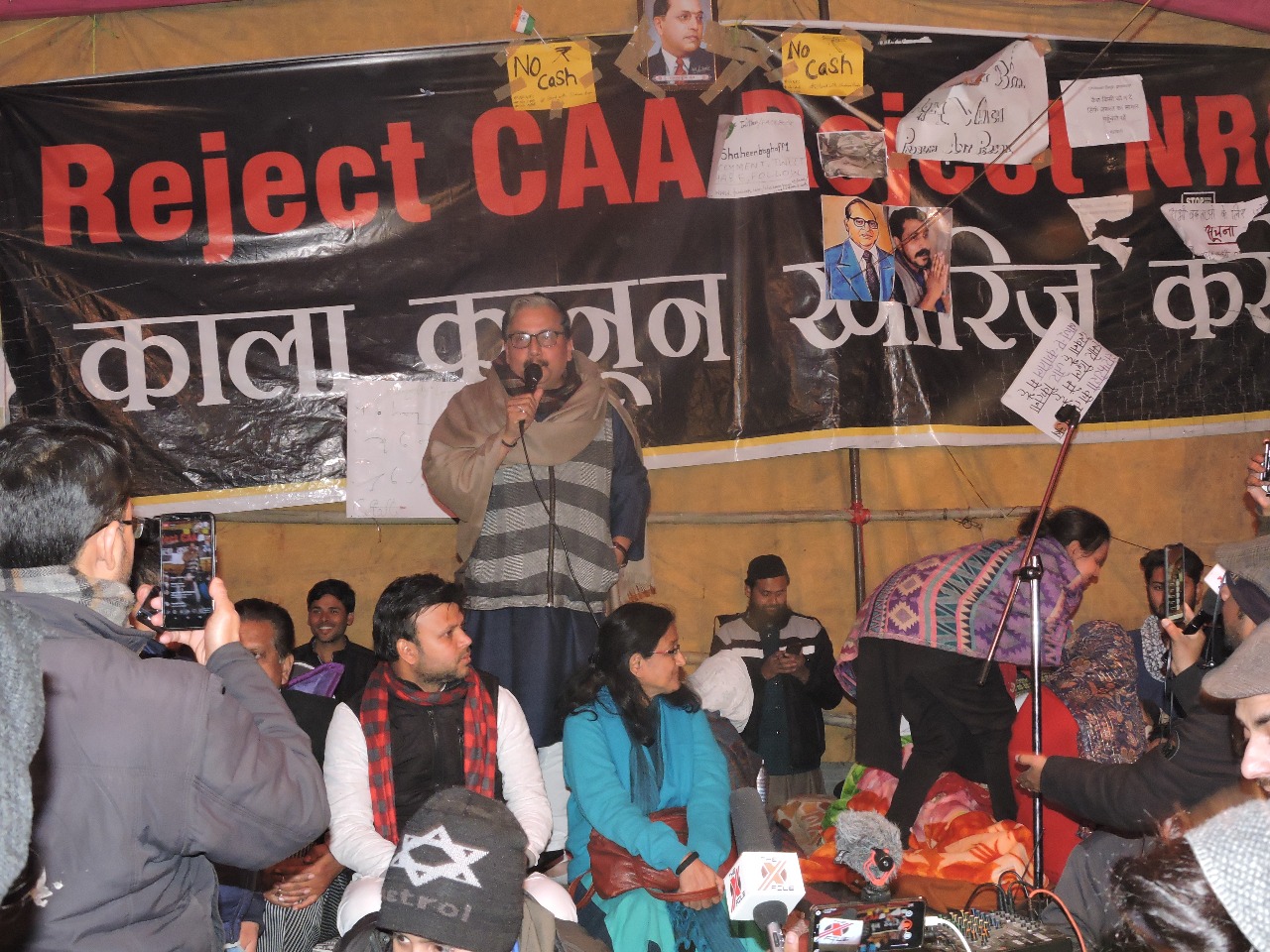 At the protest site, RJD MP Manoj Jha urges people not to show documents if government officials come to their residence and ask for papers. “Recently, I had been to Aurangabad in Maharashtra. There, I asked people to show officials a copy of our Constitution if, in case, they have to submit documents. Tell them that this is the proof of our existence. Believe me, we will win this battle,” Jha says.

‘Not here as a politician’: Sharmistha Mukherjee

Congress leader Sharmistha Mukherjee, who joined the women at the protest site, says she was not there to represent any party and had come to extend solidarity with the protesters.

Amid chants of “Azadi”, CPI leader Kanhaiya Kumar made a surprise visit to the venue and urged protesters not to show their papers to NPR inspectors. “If they come, welcome them with a smile, give them water but don’t give them your documents. Remember, NPR is itself NRC,” the former JNU Students’ Union leader says.

With the Delhi Assembly polls scheduled for February 8, Maryam Khan, who has been following the speeches of leaders from different political parties closely, says, “We all know why they come here. But we are not thinking of the Delhi elections right now.”

Claiming that most women protesters did not have any political affiliation, she says, “We have made up our mind that we will not cast our votes if the government doesn’t withdraw the CAA. Till now, they thought Muslim women can’t come beyond burqa. We are here to change that notion. Enough of police atrocities against our children. Now, let them arrest the mothers here. Will not back down.”