The Free Metro Scheme, Which Was Estimated To Cost The AAP Government Approximately Rs 1,600 Crore, Came Months Ahead Of The Delhi Assembly Elections Scheduled To Be Held Later This Year.

In yet another face off against the Arvind Kejriwal-led Aam Aadmi Party (AAP), the Centre on Thursday rejected the Delhi government's proposed scheme for free metro and bus travel for women in the city. Asked if the Union Government has any proposal regarding free rides for women in Delhi Metro trains, Union Housing and Urban Affairs Minister Hardeep Singh Puri in Lok Sabha said they did not have one. The question was asked by Trinamool Congress MP Saugata Roy during the ongoing Budget Session of Parliament on Thursday.

The questions which were asked regarding AAP government's free metro stunt in Lok Sabha are as follows: 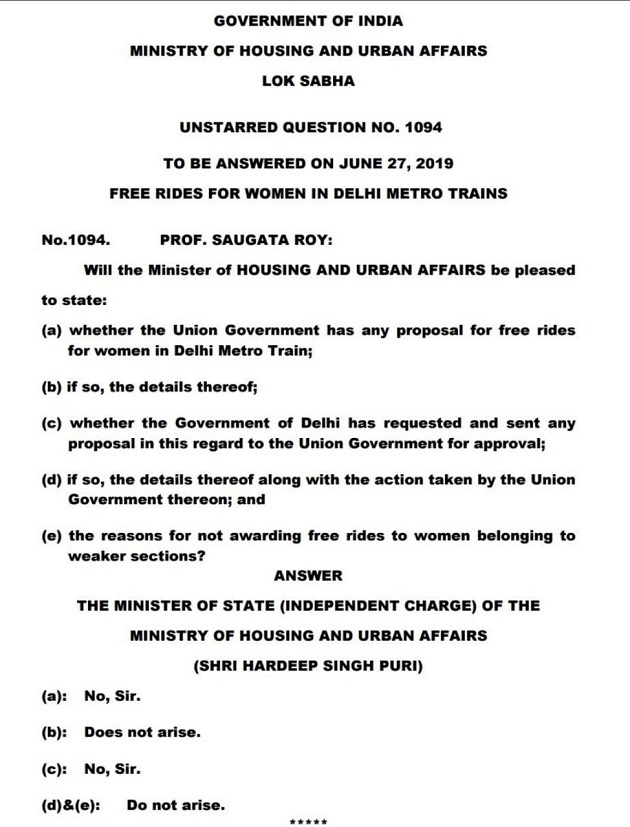 Early in the month, Delhi Chief Minister and Aam Aadmi Party (AAP) chief Arvind Kejriwal announced free rides in metro and in buses for women who wish to avail of the facility. The scheme, which was estimated to cost the government approximately Rs 1,600 crore, came months ahead of the Delhi Assembly elections scheduled to be held later this year.

Addressing a press conference on June 2, Kejriwal said, "The safety of women is the most important thing for the AAP government. Keeping this in mind, the government has decided that in Delhi all Delhi Transport Corporation (DTC) and cluster buses and the Metro will be free for women so that the maximum number of women can use public transport. This is said to be the safest for women. They are not able to use these services also because of the increase in Metro fares".

"We don't need the centre's permission for this. The Delhi government will bear the cost of this. The cost for the remaining six months will be ₹700-800 crore," he added.

The Delhi government has been working on a voluntary model for the scheme, where travellers can opt out of the subsidy. However, officials of the Delhi Metro Railway Corporation (DMRC), which is a joint venture between the state and central governments, did not comment on the development.

Meanwhile, the AAP's decision on free metro rides has recieved wide condemnations from across party lines, While the Bharatiya Janata Party (BJP) dubbed it "yet another lie" of the Delhi government, the Delhi Congress mocked the decision, saying it will not be surprising if the Kejriwal government announces free moon travel.