Hundreds Of Police Personnel Protested At The Old Delhi Police Headquarters Against Repeated Incidents Of Violence Against Them.

Delhi Police Commissioner Amulya Patnaik on Tuesday called an urgent meeting to discuss the ongoing cops protest in the national capital. According to the sources, the meeting will be held at the Delhi Police Headquarters which will be attended by Special SP and Joint SP. Earlier in the day, the Delhi top cop urged the protesting police personnel to return to work after hundreds of them gathered outside the old Delhi Police headquarters at ITO to register their protest against incidents of violence against the force. Scores of police personnel protested outside the headquarters raising their voice against the recent incidents. They also put forward some demands including creation of Police Protection Act and stripping judges of police protection.

While the protest started with just a handful of cops wearing black armbands, hundreds joined in at the congested ITO area as news of the protests spread.
The protests came a day after a policeman on duty was allegedly assaulted by a group of lawyers at Saket District Court premises in New Delhi. Last Saturday, a parking row between between police personnel and lawyers on Saturday had escalated leading to violence and arson at the Tis Hazari Court complex.

A judicial inquiry has already been ordered into the Tis Hazari court violence while an FIR has been lodged against unidentified lawayers in the incident at Saket Court. 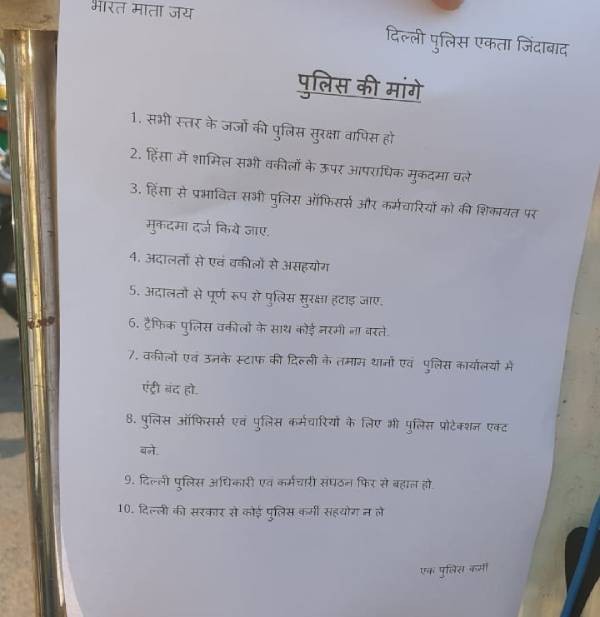 Holding placards that read "We are human in police uniforms" and "Protectors Need Protection", the protesting police personnel gathered outside the police headquarters at ITO and urged their seniors to stand with them to save the honour of the uniform.

One of placard at the protests, "How is the Josh? Low Sir"- inspired by the dialogue in the movie, Uri- The Surgical Strike.

We have to behave like a disciplined force: Amulya Patnaik

Addressing the protesting police personnel, Delhi Commissioner of Police Amulya Patnaik said, "In last few days, there have been certain incidents in the capital which we handled very well. The situation is improving after that. I appeal to all to maintain peace. It’s testing time for us."

"We have to behave like a disciplined force. The government and the people expect us to uphold the law, it is our big responsibility. I urge you to resume duty," Patnaik told the police personnel, adding that their concerns will be addressed.

Patnaik said he expected justice for the police in the inquiry instituted by the high court.

"These are testing times (for the police), there are expectations (from the police) and there should be patience," said Patnaik.

He also asked the police personnel not to generalise the isolated incidents that had taken place, reposed faith in the judiciary inquiry and promised 'legal action'ÂÂÂÂ against people responsible for Monday's assault on policemen.

Meanwhile, Delhi Police submitted a report on the clash between lawyers and police at the Tis Hazari court to The Union Home Ministry. It is a factual report in which Delhi Police has given details of the circumstances leading to Saturday's incident and the action taken after it, a Home Ministry official said told PTI. It does not cover what happened after Saturday, including an incident on Monday in which a a group of lawyers assaulted a policeman outside the Saket court, he said.

At least 20 police personnel and several lawyers were injured and many vehicles were damaged in the incident. The lawyers alleged that the police fired at them.

The Delhi High Court on Sunday ordered a judicial inquiry into the violence by a team comprising a retired judge, Directors of the Central Bureau of Investigation (CBI), the Intelligence Bureau and Vigilance.