â€œPDP Expels Leaders For Going Against The Will Of The People,' The Party Said In A Press Release Posted On Its Official Twitter Handle.

The Peoples Democratic Party (PDP) on Wednesday expelled all the party leaders namely Dilawar Mir, Rafi Ahmed Mir, Zaffar Iqbal Manhas, Ch Qamar Hussain, Raja Manzoor, Javaid Beigh, Ab Majeed Padroo and Ab Rahim Rather for visiting foreign envoys, which they call is against the will of the people.

“PDP expels leaders for going against the will of the people,” the party said in a press release posted on its official Twitter handle. "In view of the development post August 5 and the unilateral move of the government of India which has violated the will and hurt the sentiments of people, it has come to attention of the party that certain party leaders have been part of the parleys which go against the interests of the state, official position and core beliefs of the party," the release said.

It said the party disciplinary committee has recommended the expulsion of all these leaders from the basic membership of the party. The expelled leaders have thrown their weight behind former PDP leader Syed Altaf Bukhari and were part of the delegation that met Lieutenant Governor G C Murmu On Tuesday.

They also met the visiting envoys from 15 countries, who arrived here on Thursday on a two-day visit to Jammu and Kashmir. This is the first visit by diplomats since August last year when Jammu and Kashmir’s special status was revoked and it was downsized to a union territory.

Senior PDP leader Muzaffar Hussain Baig on Thursday said former chief minister and party president Mehbooba Mufti’s “provocative” statement over Article 370 resulted in downgrading of Jammu and Kashmir into two union territories. Mufti had in 2017 warned the Centre that if special rights and privileges to the people of Jammu and Kashmir under Article 370 of the Constitution are tinkered with, then there would be no one in the state to hold the tricolour. “The statement was made by Mehbooba Mufti in my absence. I was not there when she made it. I have on record said that the statement like it resulted in downgrading of the state (JK) into union territories,” Baig, who is one of the founding members of the PDP and former deputy chief minister, told reporters here. He added the “threatening statement” to New Delhi should not have been made. “If Jammu and Kashmir has to live together and if we have to bat for our rights, we have to talk with decency and humility,” the PDP leader said. Baig criticized the “provocative” statement of Mufti and said one cannot “threaten” the top leadership in New Delhi to see one’s grievances being heard. 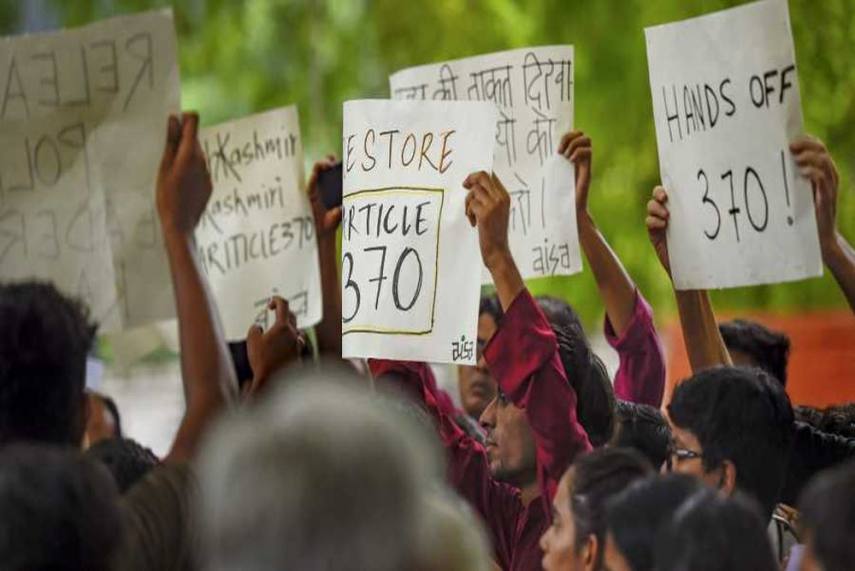 Envoys from 16 nations in Kashmir to assess ground situation

US Ambassador to India Kenneth I Juster and envoys from 15 other countries arrived here on Thursday on a two-day visit to Jammu and Kashmir, the first visit by diplomats since August last year when the state’s special status was revoked and it was downsized to a union territory. The Delhi-based envoys, who came here on a special chartered flight, landed at Srinagar’s technical airport and were taken directly to the army cantonment for a briefing.  Top officials from the newly carved out union territory of Jammu and Kashmir received the delegation, which will be going to Jammu later in the day and stay the night there. The envoys, who are here as part of the government’s diplomatic outreach to rebut Pakistan’s propaganda on the Kashmir issue, will meet Lt Governor G C Murmu as well as civil society members and receive briefings on the security situation from various agencies, officials said. Besides the US, the delegation includes diplomats from Bangladesh, Vietnam, Norway, Maldives, South Korea, Morocco, and Nigeria. They return to Delhi on Friday.