Earlier, There Were Reports That Had Suggested That BJP Leader Ashish Shelar Had Met Raj Thackeray After Its Fallout With The Uddhav Thackeray-led Sena. 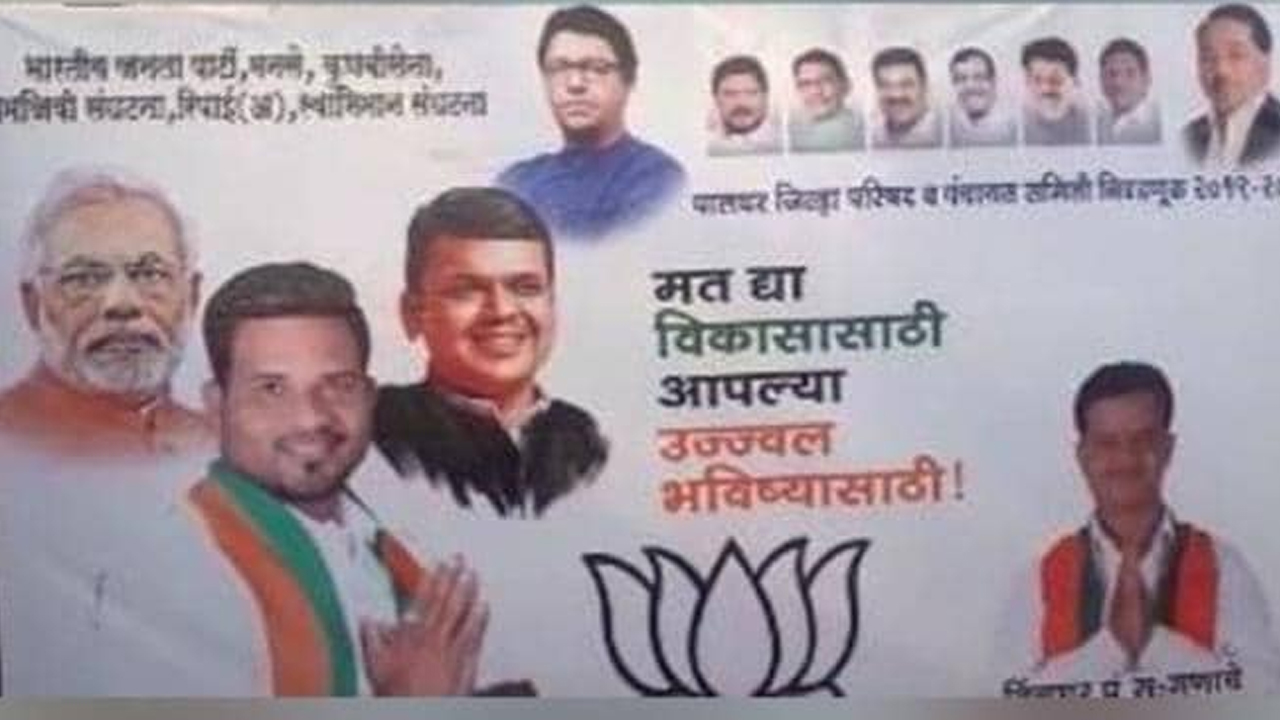 According to the sources, the banner has reportedly been put as a part of campaign for the upcoming Zilla Parishad polls in Palghar and suggests that the BJP can ally with Raj Thackeray's MNS in the local body elections.

Earlier, there were reports that had suggested that BJP leader Ashish Shelar had met Raj Thackeray after its fallout with the Uddhav Thackeray-led Sena.

The Shiv Sena earlier admitted that there was a tussle among senior leaders of the three ruling alliance parties in Maharashtra for key Cabinet berths, and said some MLAs could not be inducted as ministers because the list of “probables” was huge.

It also took a dim view of some people vandalising the Congress office in Pune to protest against non-inclusion of party MLA Sangram Thopte in the ministry. The Congress used to call Shiv Sena’s protests as ‘rada culture’ (hooliganism), but what Thopte’s alleged supporters did was exactly the same, it said.

This does not suit the “Congress culture”, an editorial in Sena mouthpiece ‘Saamana’ said. Chief Minister Uddhav Thackeray expanded his month-old ministry on Monday by inducting 36 ministers. “The Cabinet expansion was, indeed, delayed but it finally happened. There were some sparks of disappointment from those who could not make the cut, but the list of probables was huge,” the Shiv Sena said.

It said the opposition (BJP) may be “bubbling” over such developments, but even the previous Devendra Fadnavis government was no exception to such discontent during its Cabinet expansions. The Uddhav Thackeray-led party also said it kept its word by inducting three Independents, who extended support to the Shiv Sena, unlike the Congress and NCP.

“A strong and experienced Cabinet is in power, it should be allowed to function,” the Sena said. On Shiv Sena MLA Bhaskar Jadhav expressing “shock” over his exclusion from the ministry, the Marathi daily said Cabinet berth was “not promised” to anyone, including Jadhav, who joined the Thackeray-led party after quitting the NCP.

“Jadhav claimed Thackeray promised to make him Cabinet minister. As per our information, no such promise was made to him. Thackeray must have asked him to join the Sena ahead of the Assembly polls and be part of the government,” it said.

The Shiv Sena joined hands with the Congress and NCP, its traditional adversaries, after its alliance with the BJP collapsed over the issue of sharing the chief ministerial post following the state Assembly polls held in October last year.

Noting that there was a tussle over portfolio distribution, the Shiv Sena said senior Congress leader and former chief minister Ashok Chavan, who has been inducted into the state Cabinet, needs a ministry like ‘revenue’. But the ministry is currently with another Congress leader Balasaheb Thorat, it pointed out. Expressing displeasure over vandalisation of Congress’ office in Pune, the Sena said though Sangram Thopte distanced himself from the protest, the way such discontent has come out does not suit the “Congress culture”.

“The Congress used to call Shiv Sena’s protests as ‘rada culture’, but what Thopte’s alleged supporters did in the Pune Congress office was exactly the same,” it said. Another Congress hopeful was three-time MLA Praniti Shinde, whose supporter wrote a letter in blood to party chief Sonia Gandhi, claiming that Shinde and her father worked hard for the party and always remained loyal to the leadership.