Pravin Chowgule, a 28-year-old Maharashtra Navnirman Sena (MNS) worker, on Tuesday late night committed suicide by setting himself on fire after party chief Raj Thackeray received summons from Enforcement Directorate (ED). It is to be noted that MNS chief Raj Thackeray has been summoned to appear on Thursday (August 22) in a case related to alleged irregularities regarding Infrastructure Leasing & Financial Services (IL&FS) loan in Kohinoor CTNL.

Pravin Chowgule was a resident of Vitawa near Kalwa in Thane. According to the initial reports, Pravin was tensed thinking about Raj Thackeray’s fate and was discussing the same with his close friends. Thane police said that Pravin worked with a private firm and was a diehard fan of MNS chief Raj Thackeray.

However, police are yet to confirm if Pravin committed suicide only because of the ED summons to Raj Thackeray. Earlier too, he had reportedly attempted suicide.

Before committing suicide Pravin had put over 1,000 posts on Facebook against the probe agency and in favour of the party chief. In one of the 1,000 posts, he said, “If any ED official comes to Raj Thackeray’s residence I will burn them with bidi". 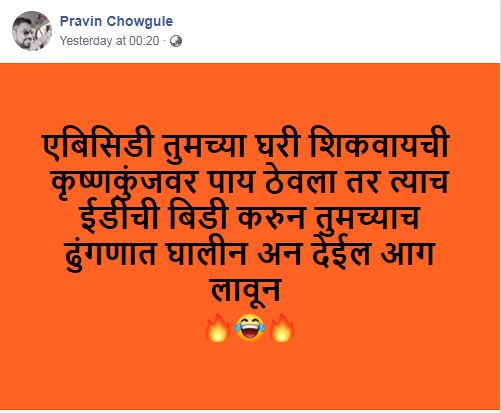 MNS leader Avinash Jadhav said, “Pravin was one of the biggest fans of Raj saheb. Wherever there would be Raj saheb’s rally, he would paint his body in MNS colours.”

"Pravin would be in the forefront for party work. When I came to know about the incident, I rushed to his house. He had suffered 85 per cent burns. We immediately took him to a hospital but he was declared brought dead. This is extremely shocking. I request MNS followers not to take such extreme steps. Everything will happen according to the law. Raj saheb has done nothing wrong, nothing will happen to him,” he added.