The Mishap Occurred Near Nimgul Village On The Shahada-Dondaicha Road At Around 10.30 Pm Yesterday.

In yet another tragic incident, at least 15 people were killed and 35 others injured after a container truck rammed into a state transport bus coming from the opposite direction in Maharashtra's Dhule in late Sunday night, according to police. The mishap occurred near Nimgul village on the Shahada-Dondaicha road at around 10.30 pm yesterday.

The bus carrying a total of 45 passengers was on its way to Aurangabad. While eleven people, including two drivers, died on the spot, others succumbed to their injuries while undergoing medical treatment at a state hospital in Dhule. Eight of the total injured were declared critical when reached the hospital. 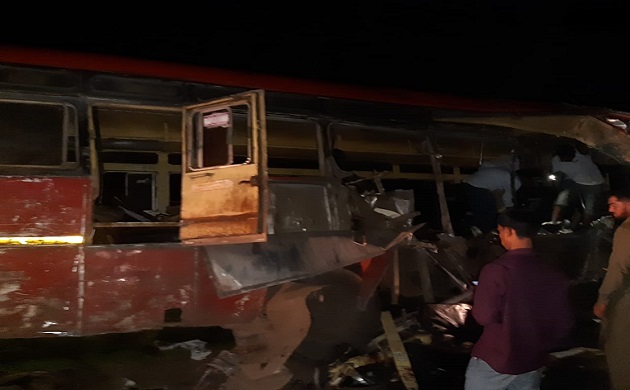 Locals were the first to spot the incident and reached there to help some passengers come out from the bus. Soon after the authorities arrived at the site and launched an investigation into the case.

However, the police are yet to ascertain the actual reason behind the incident and is likely to register a case of accidental death anytime soon. The bodies have been sent for post-mortem, the reports for which are still awaited.