The Man Was Handed Over To The Local Police By The CISF Personnel For Further Investigation.

A 38-year-old man has been detained at a Delhi Metro station on Sunday for allegedly carrying a pistol in his bag, officials said.

CISF personnel apprehended Vishal C, a resident of Lajpat Nagar in Delhi, at the Anand Vihar Metro station at around 6 am after the X-ray baggage scanner detected a country-made pistol in his bag, they said. 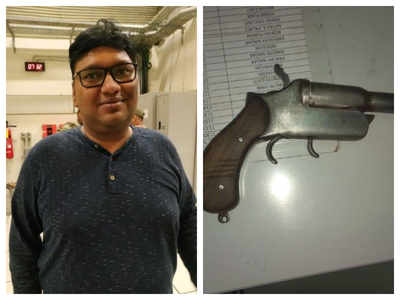 The man was handed over to the local police by the Central Industrial Security Force (CISF) personnel for further investigation, officials said.

Earlier in February, a 28-year-old man was arrested in Noida after he was found carrying a country-made pistol inside a metro station on the Blue Line of the Delhi Metro, the police said. The accused was held by the Central Industrial Security Force (CISF) officials when the firearm was detected in his bag by a scanning machine at the Noida Sector 15 metro station, a police official said.

He was identified as Ankit Kumar Singh, 28, a resident of Palam village in Delhi. Singh told investigators that he is a final year engineering student at a college in Roorkee, Uttarakhand, police said.

“His claims about his age and other details are being verified,” said Rajveer Singh Chauhan, in-charge of Sector 20 police station, where the case has been lodged.

Singh told police that he had returned from a wedding in Saharanpur and wanted to board the metro to reach Palam, where he had to attend another wedding, the official said.

“He has been arrested under the Arms Act and would be produced in a court,” Chauhan said.

Carrying arms and ammunition in the Delhi Metro is banned by the law.