Whenever She Used To Speak To Me On Phone, She Would Say That These Three (senior Doctors) People Torture Her As She Belongs To A Tribal Community, Use Casteist Slurs On Her, Her Mother Said.

A 23-year-old doctor who committed suicide at a state-run hospital in Mumbai on May 22. Payal Salman Tadvi, a resident doctor who was pursuing gynaecology, was found dead in her room at the BYL Nair Hospital. Payel’s mother has alleged that her seniors used to persistently harass her with casteist remarks. The mother, who is suffering cancer, said they had complained to the management but no action was taken against the accused.

Three doctors who Tadvi had accused of harassing her before she killed herself are on the run. The Maharashtra Association of Resident Doctors has cancelled the memberships of the three accused, who have been identified as Hema Ahuja, Bhakti Mehar and Ankita Khandilwal, news agency ANI reported on Sunday.

The three accused doctors have writen to the Maharashtra Association of Resident Doctors, stating, "We want college to conduct fair investigation. But this isn't the way to do investigation through police force&media pressure without listening to our side..." 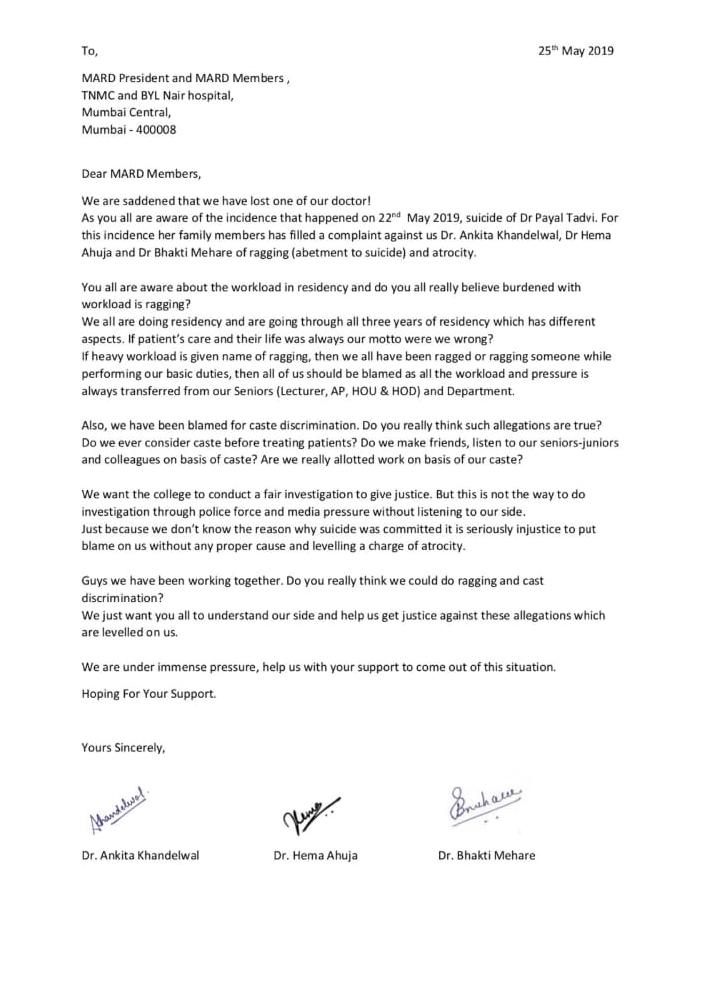 Senior police officer Deepak Kundal said a First Information Report (FIR) has been filed and the three accused also face a case under a stringent law, which gives no scope for bail, to protect Scheduled Castes and Scheduled Tribes from atrocities.

"Whenever she used to speak to me on phone, she would say that these three (senior doctors) people torture her as she belongs to a tribal community, use casteist slurs on her. We want justice for her," Tadvi’s mother, Abeda, told ANI.

BYL Nair Hospital’s dean Ramesh Bharmal denied the allegations. “Dr Payal’s mother’s claims that she had complained to the hospital about the alleged torture being meted out to her daughter are not true. We have received no complaint till date regarding this issue,” said Bharmal.

He said the hospital has formed an anti-ragging committee and summoned the three doctors. “They are currently not in Mumbai. The committee will file its report as soon as possible,” the dean said.

The mother also alleged that though the management promised to take action against the accused they refused to give anything in writing. “If the management had acted on time, her life could have been saved and the career of the three doctors would not have gone wasted,” the colleague told NDTV, asking not to be identified.