The College, Affiliated To The Indraprastha University, Is Located In Pitampura. Delhi Police Has Denied Rumours Doing The Rounds In The City, As It Promised Strong Action Against Rumour-mongers.

The candidates who are appearing for VIPS internal examination, the Vivekananda Institute of Professional Studies on Sunday postponed the its internal examinations scheduled to be held on March 2, i.e., tomorrow, following the rumours of violence and disturbance from parts of the west and north Delhi.

The college, affiliated to the Indraprastha University, is located in Pitampura. Delhi Police has denied rumours doing the rounds in the city, as it promised strong action against rumour-mongers. 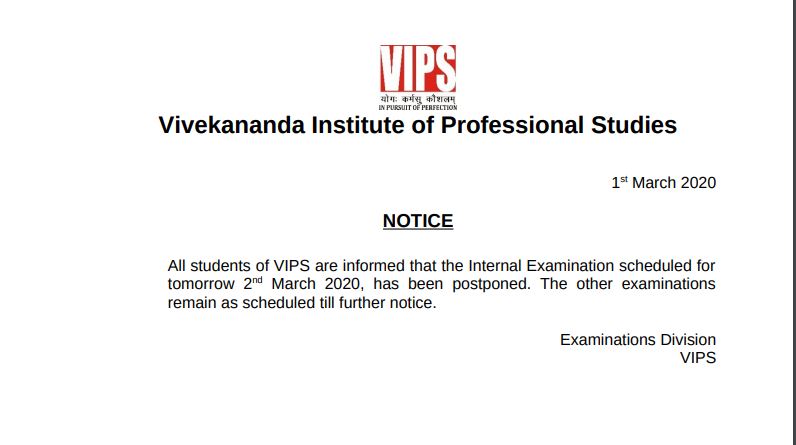 A week after deadly communal violence erupted in northeast Delhi, the situation in affected areas was peaceful but tense on Sunday as four more bodies were fished out from drains in Gokalpuri and Shiv Vihar and heavy police deployment continued.

In parts of northeast Delhi, people complained of cash crunch as several bank branches and ATMs have remained closed in the aftermath of the riots.

The Delhi Police said it has registered 254 FIRs and arrested or detained 903 persons in connection with the violence so far. Forty-one of the cases were registered under the Arms Act.

No untoward incident has been reported from the northeast district over the past three days, an official said, adding police are urging residents to not pay attention to rumours and report them to authorities.

Three bodies were fished out from two drains in Gokalpuri on Sunday while one body was pulled out out from a drain in Shiv Vihar, police said. However, it is yet to be ascertained if they are linked to the riots and authorities have not updated the death toll figure.

Several bodies of riot victims have been found in drains since Wednesday including of IB staffer Ankit Sharma after violence ebbed.

Panic spread across several parts of west Delhi on Sunday evening following false rumours of violence. Delhi Metro also shut down entry and exits of seven stations without giving any reason. However, Delhi Police swiftly denied any incident and appealed to all to remain calm.

Art of Living founder Sri Sri Ravi Shankar visited some of the riot-hit areas, including Brahmapuri, and consoled the people affected by the worst violence in three decades in Delhi.

“It is very disturbing to see that so many people are badly affected. We have to relieve them of trauma and bring their lives back on track. Everyone should come together to do this,” he told reporters.

Schools are closed in Northeast district till March 7.