Lok Sabha Election 2019: All you need to know about political scenario of Bihar

In 2009, Bihar Was The Only State Where The NDA Did A Clean Sweep.

Bihar is one of the most politically crucial states in the country. With 40 constituencies, Bihar is the fourth largest state in terms of the Lok Sabha seats after Uttar Pradesh (80), Maharashtra (48) and West Bengal (42). The polling in the state was held in all seven phases starting from April 11 to May 19.

There is a bipolar contest between the National Democratic Alliance (NDA) camp and Congress-RJD led 'Mahagathbandhan' in Bihar. The NDA comprises the Janata Dal (United) and the Lok Janshakti Party (LJP) and the Bharatiya Janata Party (BJP). As per seat sharing formula, the BJP and JD(U) is contesting on 17 seats, while the LJP is seeking the electoral mandate on 6 seats.

The grand alliance, also include the HAM of former Jitan Ram Manjhi, RLSP of former Union minister Upendra Kushwaha, NCP of Sharad Pawar, Left Parties, Vikassheel Insan Party (VIP) of Mukesh Sahni are the other constituents of the grand alliance. Under the seat sharing pact, the RJD will contest 20 of the 40 Lok Sabha seats and the Congress 9. The remaining seats have been given to other allies. 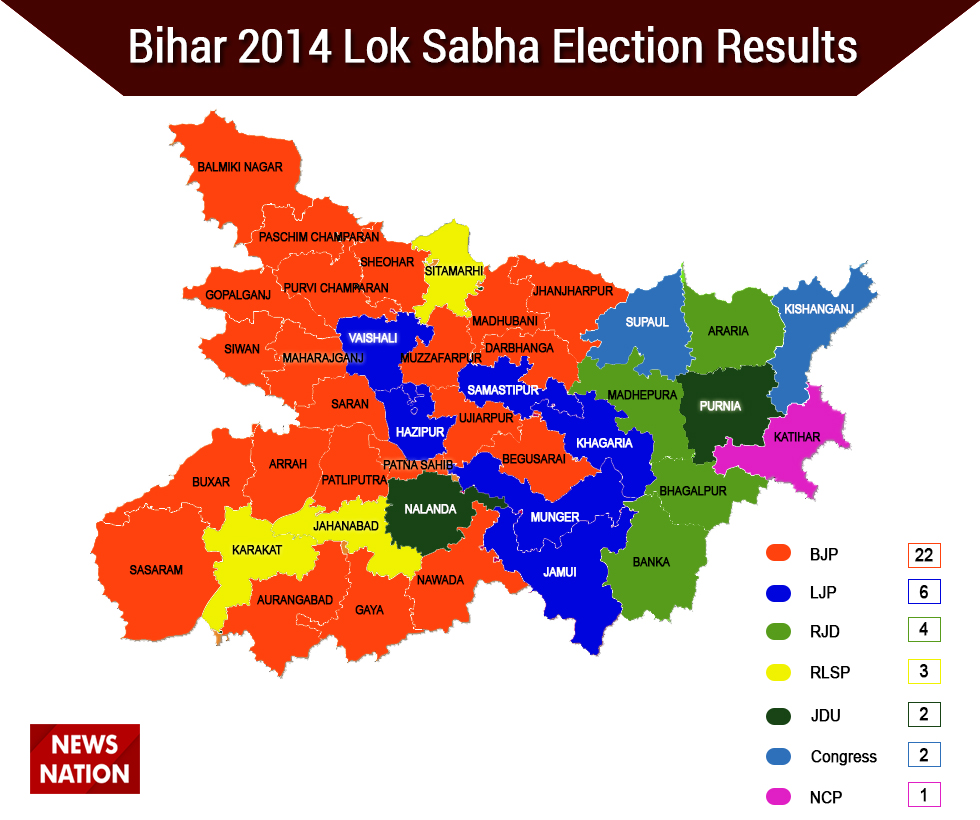 According to News Nation Exit Poll, the BJP-JDU alliance is set to sweep the Lok Sabha elections in Bihar by winning 29-31 out of the 40 seats, predicted. The RJD-Congress-led 'Mahagathbandhan' or Grand Alliance may manage to bag 9-11 seats, as per the exit poll.

What happened in Bihar in 2014 Lok Sabha Elections?

The JDU, which contested the elections on its own, got 56,62,444 votes with a vote share of over 16 per cent. According to our analysis, the BJP was ahead in 121 Assembly segments on its own during the 2014 Lok Sabha polls and its allies the LJP and the RLSP were ahead in 34 and 17 seats respectively. The RJD, the Congress and the NCP were ahead in 32, 14 and 5 seats respectively. The JDU was at the number one position in just 18 seats. In 2009, the BJP was successful on 12 and the JDU won 20 seats in an alliance. The RJD and the Congress won 4 and 2 seats respectively.

What happened in Bihar in 2009 Lok Sabha Elections?

In 2009, Bihar was the only state where the NDA did a clean sweep. NDA, consisting of the BJP and JD(U) grabbed 32 out of 40 seats. The Congress managed to win 2 seats and RJD – which joined hands with Lok Janshakti Party and Ram Vilas Paswan after a disagreement with the UPA on seat sharing - were reduced to 4 seats in the Lok Sabha. However, the LJP had failed to open its account.

After the election, Lalu Prasad had admitted that it was a mistake to leave the UPA. 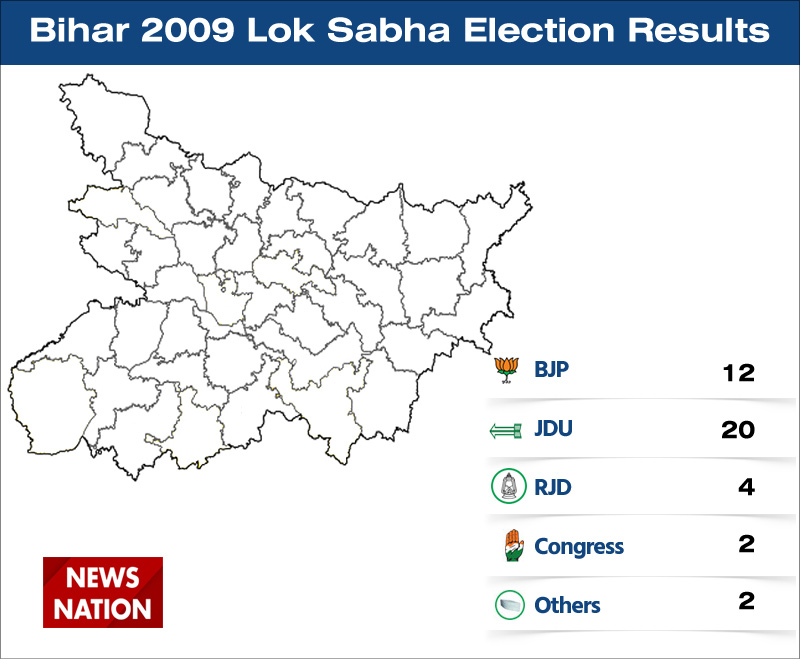 What happened in Bihar in 2004 Lok Sabha Elections?

In 2004, Lalu Prasad, husband of then Bihar Chief Minister Rabri Devi, was able to assemble a broad coalition of anti-NDA parties. It included RJD, Congress, Lok Janshakti, NCP and CPI(M). Congress was sceptical of the coalition, since the party was only allotted four seats by RJD. Lok Janshakti, a party with strong support amongst Dalit communities, were allotted eight seats. NCP and CPI(M) were allotted one seat each. RJD itself contested 26 seats.

The result was an overwhelming victory for the Lalu-led coalition which won 29 seats. The rest went to the BJP-JD(U) combine.

What happened in Bihar in 1999 Lok Sabha Elections?