All Eyes Are On The BJP And The Congress, Or To Be More Specific – Narendra Modi And Rahul Gandhi.

The 10-day countdown for the high-voltage Lok Sabha elections has begun and with this, the political parties have upped the ante to make sure that they leave no stone unturned in the power tussle. All eyes are on the BJP and the Congress, or to be more specific – Narendra Modi and Rahul Gandhi. While the Modi government seeks to retain power at the Centre on the development plank, the Congress hopes to turn the tide with its sustained efforts to forge a grand alliance against the former. 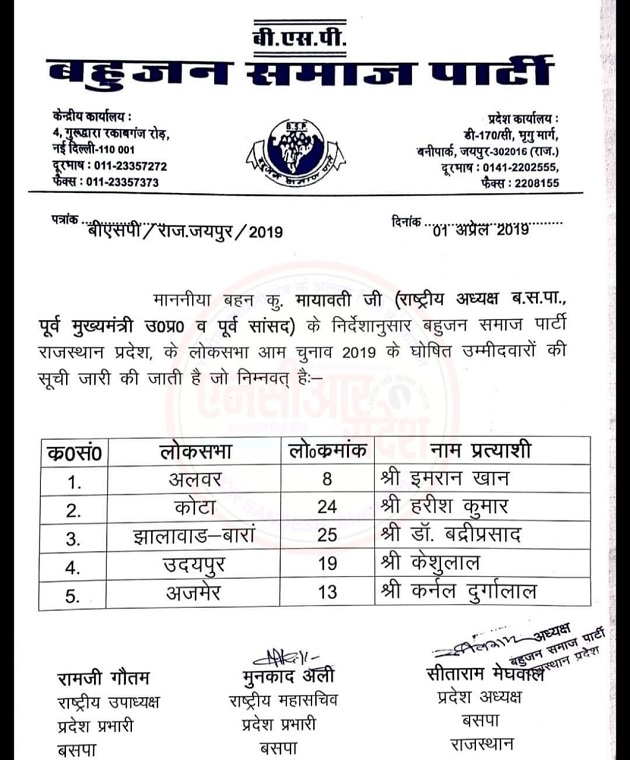 2019 Lok Sabha Election Analysis: What happened in Madhya Pradesh in 2014 polls? What will happen this year? READ HERE

"National Conference has always stood for the original terms of accession...don’t need other parties to endorse our position," former Jammu and Kashmir CM Omar Abdullah's reply to PM Modi.

One of the major allies of the Congress, National Conference, has said that there should be a separate Prime Minister for Kashmir. Is it acceptable to you?: PM Modi.

Tej Pratap Yadav said Rabri Devi should fight election from Chhapra Lok Sabha constituency in Bihar and if she won’t agree I will contest that seat independently.

Union Minister RS Prasad on 'Facebook removing 687 pages,accounts linked to Congress party ahead of polls': Today a very historical development has taken place. Owners of those accounts were not known. It was fake. It was used to spread falsehood against Narendra Modi govt.

Kapil Sibal, Congress: A Congress delegation met Election Commission over a few issues including the misuse of Doordarshan by BJP in broadcasting certain speeches made by PM Modi and use of a particular channel which has come up and has logo of 'NAMO'.

Seeking to woo women voters, Congress president Rahul Gandhi on Monday said the Rs 72,000 money proposed to be given to the poor by Congress under the ' Nyay' scheme would be deposited in their bank accounts.

We understand the importance of Polavaram Project for you all. We have declared this project as of National Importance in first Cabinet meeting. We insured at every level that, any Hindrance should not take place in this: PM Modi.

We have taken up so many infrastructure projects in Andhra Pradesh including the modernisation and upgradation of airports because of sincere taxpayer. I salute them for their contribution: PM Modi.

NDA government is committed to the all-round development of Andhra Pradesh, says Modi in his Rajahmundry rally.

With the help of you all honest taxpayers, we have taken steps to strengthen agriculture, education, connectivity and industrial infrastructure in Rajahmundry and Andhra Pradesh: PM Narendra Modi.

Two days before, I was in Rayalaseema. Today I am in Godavari to take blessings of you all. Thanking you all to present in such large number even in this scorching heat, says PM Modi.

First of all, I want to thank the public of Andhra Pradesh from the land of Krishna and Godavari. Whatever I have been able to accomplish in five years, it is only due to the blessings you all have showered upon me: PM Modi.

Aam Aadmi Party writes to Election Commission over 24-hour channel 'NAMO TV'. The letter states,"Can permission be granted to a party to have their own TV channel even after model code of conduct is enforced? If no permission was sought by ECI then what action has been taken?"

#ElectionsWithNewsNation | Despite being the Chief Minister of #Odisha, @Naveen_Odisha can't speak in Odia without reading from paper, says BJP chief @AmitShah

There had been only corruption and no development during last 19 years of the Naveen Patnaik government. To check on corruption you need to vote for BJP both at the centre and in Odisha...a double-engine government is needed, says Amit Shah.

Naveen Babu has behaved like a step-mother with West and Central Odisha. It's time to respond to that, says Amit Shah

The upcoming elections will decide the future of the nation and Odisha. I travel from Kashmir to Kanyakumari, Assam to Gujarat and ask people whose government will come to power, I hear only one thing ‘Modi, Modi’, says Amit Shah in Gajapati, Odisha.

Ram Bhuwal Nishad, SP's candidate from Gorakhpur LS seat: There was a deal. Nishad Party chief, Sanjay Nishad took Rs 50 crore from BJP to become a part of the party. He had a deal with Yogi ji. pic.twitter.com/CxMYF49Az9

If you vote for TRS you are giving vote to Narendra Modi and RSS, says Rahul Gandhi in Zaheerabad.

There is "partnership" between TRS and BJP; remote control in Narendra Modi's hands, says Rahul Gandhi in Zaheerabad.

Did your chief minister ever raise the Rafale issue? Did he ever say 'chowkidar chor hai'? It's a partnership, TRS and their MPs help Narendra Modi. Fight is against Modi and BJP, only Congress is fighting, not TRS, whole country knows, says Rahul Gandhi in Zaheerabad, Telangana.

Mainpuri SP Ajai Shankar Rai: Some channels are showing that a grenade was found in Mainpuri leading to a change in the route of cavalcade of Mulayam Singh Yadav. This is completely false and misleading.

Congress scared of fielding candidates in seats where majority population dominates, this is why they are running towards minority seats, says PM Modi.

Congress has defamed our 5,000-year-old culture, you have to remember who coined the term ‘Hindu terrorism’, says PM Modi

Our brave soldiers killed terrorists at their home and this Congress is raising questions on their valour, says PM Modi.

PM Modi slams opposition, asks 'You want India's heroes or those who became heroes in Pakistan'.

Despite himself being a farmer, Sharad Pawar has forgotten farmers and their plights. Several farmers were forced to commit suicide during his tenure but Pawar did not care for them, says PM Modi.

NCP is even having trouble in their seat-share arrangement. The NCP-Congress alliance here is like Kumbhkaran which sleeps on for six  months, then one of them wakes up and swallows the money of the public, says PM Modi.

I would like to tell the Congress, your gali is like my gehna. Because by doing Chowkidari of toilets, I am also protecting our mothers and sisters, says PM Modi.

NCP is struggling from internal feud, the Congress-NCP alliance in Maharashtra is like 'kumbhkaran', says PM Modi.

Two days ago, a senior Congress leader said that Modi has only guarded toilets. Now you tell me, isn’t this an insult to those who have been involved in the work of cleaning, says PM Modi.

Still 10 days are left for polling. But the love and blessing you have given me, I wonder if Congress and NCP people will sleep tonight or not, says PM Modi.

Now its been open for all, that everyone can enjoy launching of satellites. Common people can also sit and enjoy it live, says PM Modi.

I congratulate ISRO scientists for the successful launch of over two dozen satellites of foreign countries from PSLV-C45, says PM Modi.

Prime Minister Narendra Modi and Delhi Chief Minister Arvind Kejriwal will address public rallies in Goa next week to campaign for their respective parties ahead of the Lok Sabha polls.

If you believed this #Jumla of Jumlas, a very happy #AprilFools Day to you.

Congress Rajya Sabha MP and one of the most trusted aides of UPA Chairperson Sonia Gandhi, Ahmed Patel, is likely to contest Lok Sabha elections from Gujarat's Bharuch constituency.

.@samajwadiparty leader Mulayam Singh Yadav on his way to Mainpuri to file his nomination for the Mainpuri parliamentary constituency.

Supreme Court grants time till April 8 to the 21 opposition parties seeking direction that 50 per cent EVM results be matched & crosschecked with VVPAT, to file response on an affidavit filed by the Election Commission of India which had opposed the plea.

BREAKING: @BJP4India has launched its Manifesto.

Maharashtra minister Eknath Shinde has expressed confidence that the BJP-Shiv Sena alliance will win the Lok Sabha polls and asked the coalition workers to work for increasing the victory margin this time.

This time when AP goes to polls, it must not forget the betrayal by NDA, the unfulfilled promises, the discrimination & lack of support by central govt after State bifurcation.

Fight for those who are fighting for you, for justice to AP, for securing its future. #ModiIsAMistake pic.twitter.com/riuFFlJ5au

FIR has been registered against 150 people, including Union Minister Ashwini Kumar Choubey and BJP leader Rana Pratap Singh, under multiple sections of the IPC for 'assault or criminal force to deter public servant from discharge of his duty' among other charges.