Bachan Singh Was Wheeled Into The Polling Both Using A Chair

Delhi's oldest voter, 111-year old Bachan Singh on Sunday cast his vote at a polling booth in Sant Garh. He was wheeled into the polling both using a chair. "I will vote for those who worked for us," he said. “He doesn’t even know that the Aam Aadmi Party exists. For him, every election has been a contest between the BJP and the Congress,” news agency PTI quoted his youngest son, Jasbeer Singh as saying.

“Till a few years ago, he would cycle to the polling booth and cast his vote. He never needed any help. He cooked for himself and spent most of time doing seva in gurdwara,” Jasbeer says. 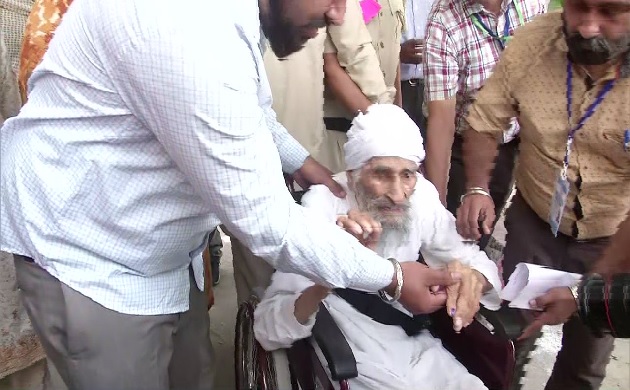 A total of 59 constituencies spread over six states and Delhi are going to polls in the seven-phase election today. Elections are being held across 14 seats in Uttar Pradesh, 10 seats in Haryana, eights constituencies each in Bihar, Madhya Pradesh and West Bengal, seven seats in Delhi and four in Jharkhand. A total of 979 candidates from across parties are testing their luck. Altogether, 66,85,401 voters, including 31,79,720 women and 116 of the third gender, are eligible to exercise their franchise. The polling began at 7 am and will continue till 6 pm.