2019 Lok Sabha Election Analysis: What happened in Jharkhand in 2014 polls? What will happen this year?

The Congress, The JMM And The JVM Have Already Announced Their Grand Alliance In The State For The Upcoming Lok Sabha Elections. The RJD Is Also A Part Of This Alliance To Take On The Ruling BJP In The State.

Lok Sabha Elections 2019: The Election Commission of India (ECI) has finally sounded the poll bugle and declared the schedule for the Lok Sabha Elections 2019 on March 10. The Lok Sabha Elections 2019 will be held in seven phases, starting from April 11. The results will be declared on May 23. 91 constituencies will go for polls in the first phase on April 11, followed by 97 constituencies in the second phase on April 18. The third phase will be held on April 23 and fourth on April 29, fifth on May 6, sixth on May 12 and seventh phase on May 19. 115 constituencies will go for polls in the third phase, 71 in the fourth phase, 51 in the fifth phase, 59 in the sixth phase and 59 in the seventh phase. We are also gearing up for the elections and are coming up with a series: 2019 Lok Sabha Election Analysis: What happened in 2014 Lok Sabha Polls? What will happen this year? Now, let's look at the political scenario in Jharkhand. The BJP swept the Lok Sabha and Assembly polls in 2014 and decimated all the opposition parties in the fray. Under Raghubar Das, the NDA formed its first majority government in the state after its formation (37: BJP and 5: AJSU). Later, the Babulal Marandi-led Jharkhand Vikas Morcha (JVM) faced a rebellion and 6 of its legislators joined the ruling BJP giving it the full majority in the 81-member Assembly. Marandi was the first chief minister of the state and deserted his parent party the BJP and formed his own outfit later. The BJP is likely to face a daunting task in 2019 as the Congress, the JMM, the JVM and the RJD have joined hands and established 'Grand Alliance' in the state. Let's discuss this in detail. Also Read: Lok Sabha Elections 2019: When will you vote? Know poll dates of your seat here

Jharkhand will vote in the last four phases i.e. on April 29, May 6, 12 and 19. Chatra, Lohardaga and Palamu will go for polls on April 29. Khunti, Ranchi, Kodarama and Hazaribagh will vote on May 6 whereas polling will be held in Dhanbad, Giridih, Jamshedpur and Singhbhum on May 12. The remaining seats of Dumka, Rajmahal and Godda will be voting in the last phase i.e. on May 19. 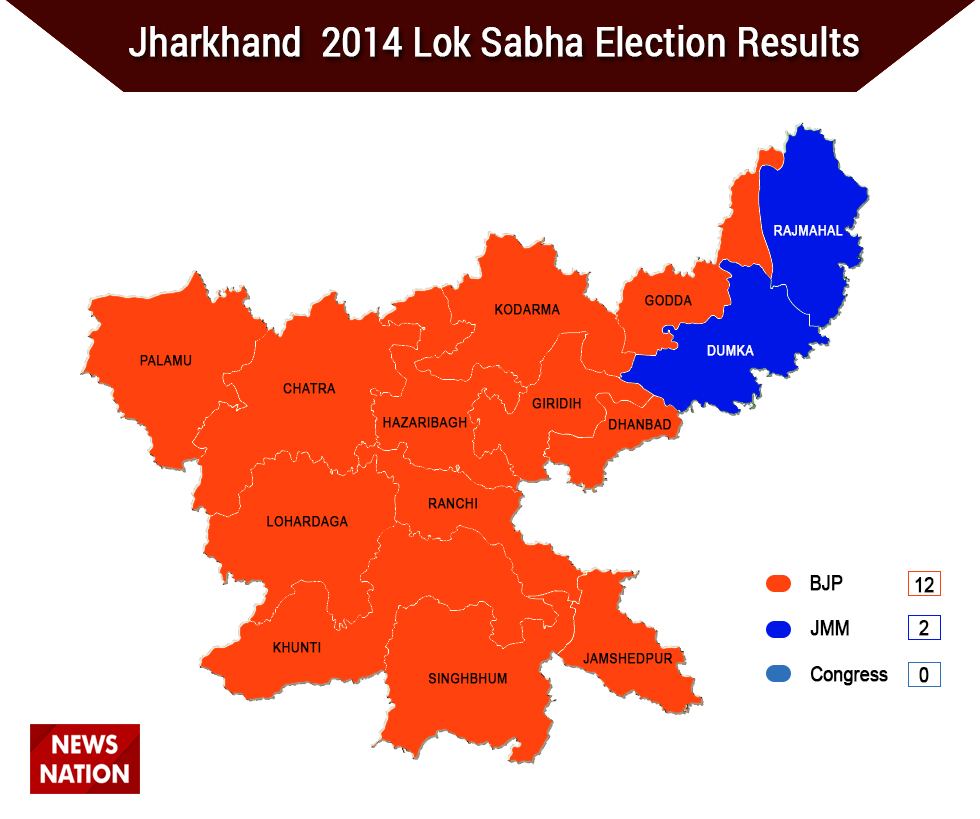 What was the result of Jharkhand Assembly Elections in 2014?
The BJP emerged as the single largest party in the 2014 Jharkhand Assembly Elections and won 37 seats in the 81-member Assembly. However, along with AJSU's 5 seats, the party crossed the majority mark of 41 in the Assembly. This was for the first time that any party or the pre-poll alliance got the majority on its own in the state. The BJP contested on 72 seats in the state and left 8 seats for the AJSU. The saffron party received 43,34,728 votes with a vote share of 31.2 per cent and the AJSU, its ally, received 5,10,277 votes with a vote share of 3.7 per cent.

In 2009 Assembly polls, both the BJP and the JMM won 18 seats each in the state. The Congress and the JVM emerged as the single largest block after the elections winning 14 and 11 seats respectively. The RJD and the AJSU were successful on 5 Assembly seats each.

What is the current scenario in Jharkhand in 2019?
The Congress, the JMM and the JVM have already announced their Grand Alliance in the state for the upcoming Lok Sabha elections. The RJD is also a part of this alliance to take on the ruling BJP in the state. As per the pact, the Congress will contest seven seats in Jharkhand, leaving four for the JMM, two for the JVM and one for the RJD. Also, the Congress will take a backseat during the Assembly polls and agreed to work under the leadership of JMM leader Hemant Soren. However, there are murmurs of discontent among the partners as the JVM wants to contest from more seats. On the other side, the BJP has also faced the alliance trouble as the AJSU wanted to contest from Ranchi, Giridih and Hazaribagh seats in the state. It may be noted that all these seats are presently held by the BJP. However, the party managed to convince the AJSU to remain in the alliance and left Giridih seat for it to contest. The combined vote share of the 'grand alliance' parties during the 2014 Assembly polls indicates that it can mar the saffron party's chances in the upcoming elections. The JMM (20.4%), the Congress (10.5%), the JVM (10%) and the RJD (3.1%) received almost 44% of the total vote share, which was more than the vote share of the BJP and the AJSU together (almost 35%).

Congress president Rahul Gandhi with JMM leader Hemant Soren. The Congress will take a backseat during the Assembly polls and agreed to work under the leadership of Soren. (File photo)

The mood in the Congress party is upbeat after its victory in the recently held Kolebira bypoll in Jharkhand. Earlier, the BJP lost the Gomia and Silli bypolls at the hands of the JMM. In 2015 also, the Congress won the Lohardaga Assembly seat in a bypoll. However, the BJP had won all the five municipal corporations (Ranchi, Medninagar, Adityapur, Hazaribagh and Giridih) and registered comfortable victories in Nagar Parishad and Nagar Panchayat polls. 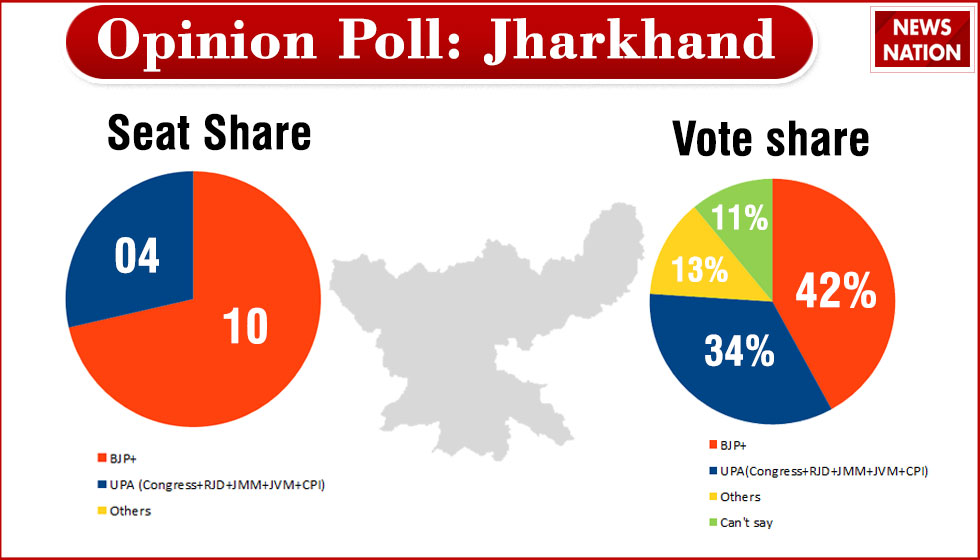 According to a poll, the BJP-led NDA may not repeat its 2014 performance in Jharkhand but will remain the leading alliance whereas the UPA is not likely to take advantage of anti-incumbency in the state. Prime Minister Narendra Modi has a massive lead over Rahul Gandhi in Jharkhand also when the respondents were asked about their favourite Prime Ministerial candidate in 2019. Modi got the backing of 46 per cent people, while only 28 per cent chose Rahul Gandhi.