2019 Lok Sabha Election Analysis: What happened in Arunachal Pradesh in 2014 polls? What will happen this year?

Lok Sabha Elections 2019: The Election Commission of India (ECI) has finally sounded the poll bugle and declared the schedule for the Lok Sabha Elections 2019 on March 10. The Lok Sabha Elections 2019 will be held in seven phases, starting from April 11. The results will be declared on May 23. 91 constituencies will go for polls in the first phase on April 11, followed by 97 constituencies in the second phase on April 18. The third phase will be held on April 23 and fourth on April 29, fifth on May 6, sixth on May 12 and seventh phase on May 19. 115 constituencies will go for polls in the third phase, 71 in the fourth phase, 51 in the fifth phase, 59 in the sixth phase and 59 in the seventh phase. We are also gearing up for the elections and are coming up with a series: 2019 Lok Sabha Election Analysis: What happened in 2014 Lok Sabha Polls? What will happen this year? Let us look at the political scenario in the state of Arunachal Pradesh. The state will go for Assembly elections also along with 2019 Lok Sabha Elections. The BJP has been ruling the state since 2016 under the leadership of Pema Khandu. It may be noted that the Congress got the full majority in the 2014 Assembly elections but the rebellion in the party led to the downfall of its government led by Nabam Tuki. Several Congress legislators rebelled against the Tuki government and formed the government under Kalikho Pul in February 2016, backed by the BJP. However, the Supreme Court overturned it and installed Tuki as the chief minister again. Later, Pul found hanging from a ceiling fan after the Supreme Court verdict. The Congress party again grabbed the power this time under the leadership of Pema Khandu. However, Khandu also ditched the Congress in December and joined the BJP along with other legislators. This was BJP's second government in the state after the 2003 government of Gegong Apang. There are 2 Lok Sabha seats and 60 Assembly seats in the state. Let's discuss this in detail. Also Read: Lok Sabha Elections 2019: When will you vote? Know poll dates of your seat here

The state will go for state elections for the 60-member Assembly along with the two Lok Sabha seats (Arunachal East and Arunachal West) on April 11. Odisha, Andhra Pradesh and Sikkim are the other states which will have both the elections simultaneously.

What happened in Arunachal Pradesh in 2014 Lok Sabha Elections? 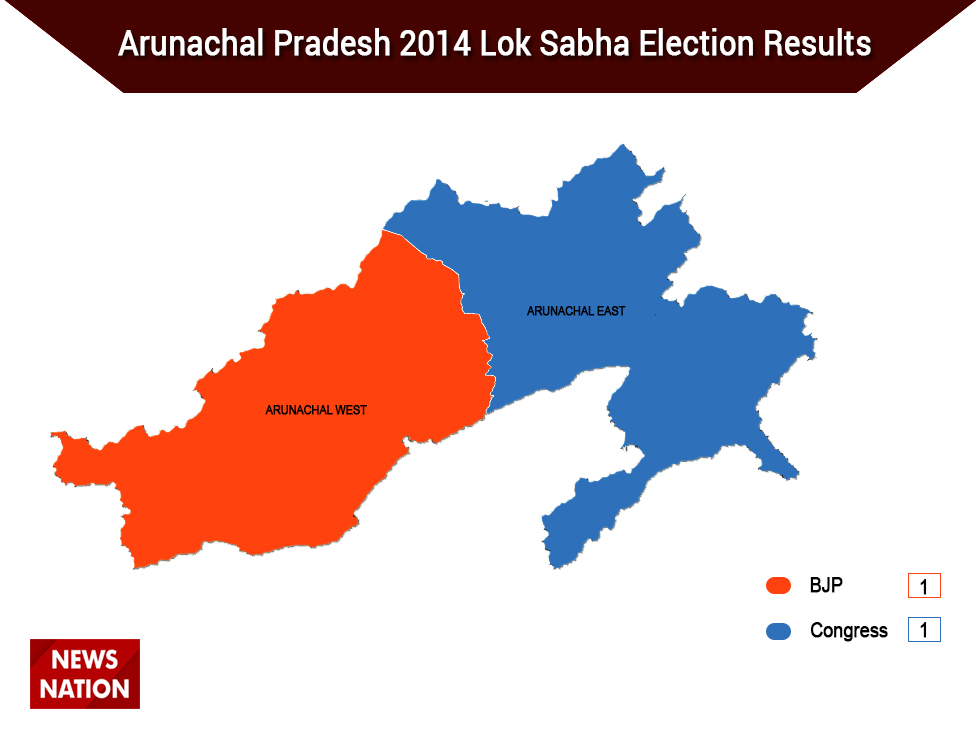 What was the result of Arunachal Pradesh Assembly Elections in 2014?
Arunachal Pradesh saw both the Lok Sabha Elections and the Assembly elections together in 2014. However, there was a major difference in the results of these two elections. The BJP was a bigger party in the state during the parliamentary polls but the Congress outperformed it in the simultaneously held Assembly elections. The Congress won a massive majority in the 2014 Assembly elections and won 42 seats in the 60-member Assembly. The party received 2,51,575 votes with a vote share of 49.50 per cent.

What is the current scenario in Arunachal Pradesh in 2019?
The Congress and the ruling BJP will try to win both the Lok Sabha and the Assembly elections in 2019. The Congress, which came to power in 2014 in the state, will be hoping to get the state back in its fold. However, the BJP has been on a winning spree in the state over the period of time. The party had wrested the Pakke-Kessang and Likabali Assembly constituencies from the Congress party in bypolls held in 2017. In 2016 also, the BJP won the Anjaw Assembly seat as the bypoll was necessitated following the death of Kalikho Pul. The BJP has launched its Mission 60 in Arunachal Pradesh and already declared Pema Khandu as party's face for the upcoming Assembly polls.

Meanwhile, in a jolt to the BJP, former Arunachal Pradesh chief minister Gegong Apang has recently quit the party and alleged that the party has become a "platform to seek power" and serves a leadership that "hates decentralisation or democratic decision-making." He had headed the Congress government in the state for 19 years between 1980 to 1999. Later, he founded his own party Arunachal Congress and supported the Atal Bihari Vajpayee government. His son Omak Apang became the minister in the Vajpayee Cabinet. In 2003, he was instrumental in splitting the Congress party and merged the entire group with the BJP. The BJP finally got its first government in the Northeast under Gegong Apang. Earlier, seven of the nine MLAs of the PPA joined the BJP ally NPP. Later, two of these MLAs joined the Congress party.