In 2014 Lok Sabha Elections, The BJP Had Won Seven Seats, While AIUDF And Congress Won Three Seats Each.

With barely three days to go for the Lok Sabha elections across India, the National Opinion Poll conducted by News Nation predicts a neck-and-neck fight between the BJP-AGP-BPF alliance and the Congress in Assam. However, the trio still leads the race with wins in 8 Lok Sabha seats, despite the popular perception that the Citizenship (Amendment) Bill 2016 and the ongoing NRC row, dented BJP's support base in the north-eastern state. The Congress, on the other hand, is predicted to bag 5 seats followed by the Assam-based All India United Democratic Front (AIUDF) which may manage win in a single seat.

As far as the vote share is concerned, the BJP-AGP-BPF combine is likely to garner 37 per cent votes while the Congress may give a tough fight by gathering around 30 per cent votes of the total share. The AIUDF is projected to bag only 13 per cent votes followed by others (11%). 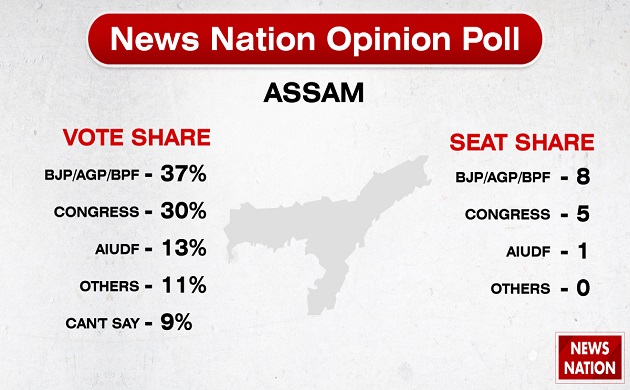 The major issues which will impact the poll run in Assam are the Citizenship Amendment Bill and the ongoing National Register of Citizens (NRC) update process. For well over 50 years, immigration has been a key issue in the state with several Bengali-speaking Hindus and Muslims living illegally in North-East. The row over the National Register of Citizens leaving out four million ordinary residents in Assam further stoked the fire and has been at the centre of a political storm in India over the last few months.

The implementation of the NRC is a key poll plank for the Saffron party, owing to their political strategy that hinges on the emphasis on illegal border infiltration and post-partition rights, the issues, that the party hopes, will be key in several seats along the Indo-Bangladesh border.

While Trinamool Congress president and West Bengal Chief Minister Mamata Banerjee has been critical of the NRC since its inception in 2018, the Congress stance on the issue comes across as being very defensive and apologetic.

In a related note, the process of identifying "illegal citizens" in Assam was initiated by former Prime Minister Manmohan Singh while the Assam accord was signed by then prime minister Rajiv Gandhi in 1985.

Other core election issues for Assam that need to be addressed by the future leaders of the state include crime against women, unemployment, education and health sector reformation, perennial floods, lack of industrialisation, economic inequality, lack of development, poverty, slow growth, problems in transport and connectivity among others.

In 2014 Lok Sabha Elections, the BJP had won seven seats, while AIUDF and Congress won three seats each. Of the 14 parliamentary constituencies, one seat went to the account of Independent.

Lok Sabha elections 2019 will be held in seven phases between April 11 and May 19. Results will be declared on May 23.