Not Satisfied With The Reply On 'khaki Underwear' Jibe At BJP's Jaya Prada, The EC =on Monday Barred Him From Campaigning For 72 Hours Beginning Tuesday Morning.

Samajwadi Party leader Azam Khan, who has developed a status of being controversy's favourite child over the years, on Tuesday has been served a fresh show cause notice by the Election Commission for allegedly making inflammatory remarks at various places in Uttar Pradeh in the past few days. The EC gave him 24 hours to respond to the notice saying prima facie he is guilty of violating the provisions of the model code.

Giving instances of his remarks, the poll panel said, on one occasion, he Khan allegedly said that "fascists are trying to kill him" while on another occasion, he had allegedly claimed that the prime minister has killed Muslims. In a separate incident, the outspoken Samajwadi Party leader claimed that criminals were occupying constitutional posts, in an apparent jibe at Rajasthan Governor Kalyan Singh.

The EC pointed out that FlRs have been registered under various sections of the Indian Penal Code and the Representation of the People Act against him in the cases. The notice also pointed out that the Supreme Court has noted that religion and caste cannot be used by anyone while making any statement during electioneering. 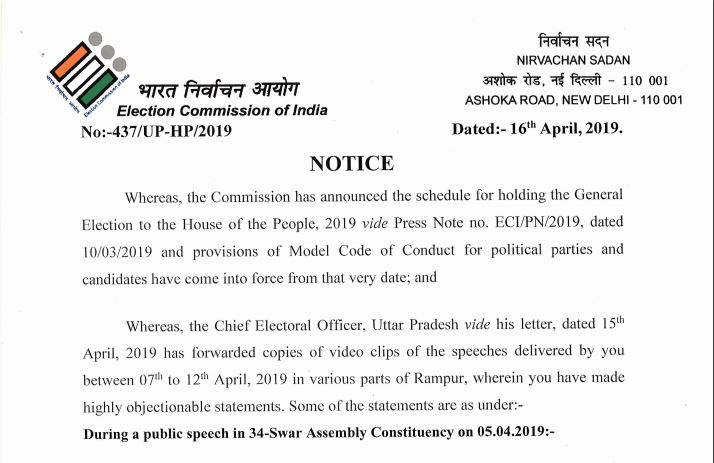 "Now, therefore, the Commission, after considering the available material and extant instructions on the matter, has decided to provide you an opportunity to explain your stand regardingÂ  the said statements. Your explanation shall be submitted within 24 hours of receipt of this notice, failing which the Commission shall take a decision without further reference to you," it read.

Not satisfied with the reply on "khaki underwear" jibe at BJP candidate Jaya Prada, the Commission had on Monday barred him from campaigning for 72 hours beginning Tuesday morning.Â While Tuesday's ban is pan India, Khan had faced a similar UP-centric ban in the 2014 Lok Sabha polls for his inflammatory remarks.

(With inputs from PTI)