2019 Lok Sabha Election Analysis: What happened in West Bengal in 2014 polls? What will happen this year?

The 2019 Polls Will See A Direct And Fiery Battle Between Mamata Banerjee On The One Side And The BJP On The Other. The Left Front And The Congress Are Fighting For Their Survival In The State As The BJP Has Taken The Number Two Spot In The State.

Lok Sabha Elections 2019: The Election Commission of India (ECI) has finally sounded the poll bugle and declared the schedule for the Lok Sabha Elections 2019 on March 10. The Lok Sabha Elections 2019 will be held in seven phases, starting from April 11. The results will be declared on May 23. 91 constituencies will go for polls in the first phase on April 11, followed by 97 constituencies in the second phase on April 18. The third phase will be held on April 23 and fourth on April 29, fifth on May 6, sixth on May 12 and seventh phase on May 19. 115 constituencies will go for polls in the third phase, 71 in the fourth phase, 51 in the fifth phase, 59 in the sixth phase and 59 in the seventh phase. We are also gearing up for the elections and are coming up with a series: 2019 Lok Sabha Election Analysis: What happened in 2014 Lok Sabha Polls? What will happen this year? Let us look at the political scenario in the politically crucial state of West Bengal. The Trinamool Congress under the leadership of Mamata Banerjee has been ruling the state since 2011. Banerjee uprooted the Left Front government from Bengal and created history by becoming the first woman chief minister of the state. The Left Front was ruling the state since 1977 under Jyoti Basu and Buddhadeb Bhattacharjee. Mamata Banerjee joined the BJP-led NDA earlier and contested the Lok Sabha polls in 1998, 1999 and 2004 with the BJP. Mamata ditched the BJP government under Atal Bihari Vajpayee in the middle of its term and formed an alliance with the Congress to take on the Left Front in the 2001 Assembly elections. However, the alliance was convincingly defeated by the Left Front. The party again joined the NDA and fought the 2006 Assembly elections with the BJP but lost again. Later, Mamata joined the Congress-led UPA again and won the Lok Sabha elections in 2009 and the Assembly elections in 2011. The party left the UPA and decided to contest the Lok Sabha polls in 2014 alone. The party not only won the 2014 elections but also stormed back to power in 2016. Let's discuss this in detail. Also Read: Lok Sabha Elections 2019: When will you vote? Know poll dates of your seat here

The polling in the state will be held in all seven phases starting from April 11 to May 19. Coochbehar and Alipurduars will vote on April 11 and Raiganj, Jalpaiguri and Darjeeling will go for polls on April 18. Voting will be held in Balurghat, Maldaha Uttar, Maldaha Dakshin, Jangipur and Murshidabad on April 23. Ranaghat, Krishnanagar, Asansol, Birbhum, Bolpur, Baharampur, Bardhaman Purba and Bardhaman-Durgapur will vote on April 29 whereas voters in Bangaon, Howrah, Uluberia, Barrackpur, Arambag, Hooghly and Sreerampur will use their franchise on May 6. Eight seats of the state namely Jhargram, Tamluk, Ghatal, Kanthi, Bishnupur, Bankura, Purulia and Medinipur will go for polls on May 12. Voting in remaining seats of Dum Dum, Barasat, Basirhat, Jaynagar, Mathurapur, Jadavpur, Kolkata Dakshin, Kolkata Uttar and Diamond Harbour will be held on May 19.

What happened in West Bengal in 2014 Lok Sabha Elections? 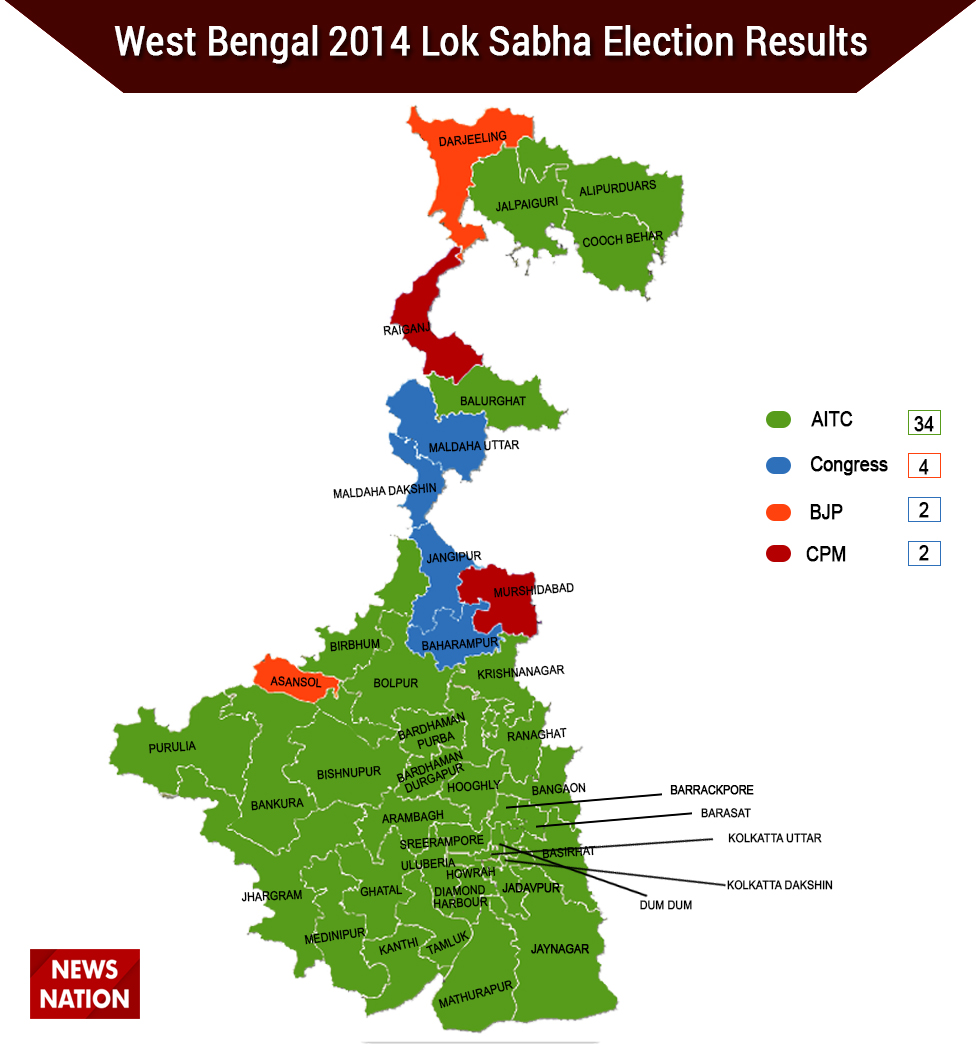 In 2014 Lok Sabha Elections, the Mamata Banerjee-led Trinamool Congress swept the state and won 34 seats. West Bengal has 42 Lok Sabha seats and is the third largest state after Uttar Pradesh (80) and Maharashtra (48) in terms of total parliamentary constituencies. The 2014 polls in West Bengal were held in 5 phases on April 17, 24, 30, May 7 and May 12. The Trinamool Congress received 2,03,16,262 votes with a vote share of 39.79 per cent. The Congress was reduced to 4 seats in the state with a vote share of 9.69 per cent. The party received 49,46,911 votes in the entire state. The Bharatiya Janata Party (BJP) surprised everyone with its performance in the state and got a respectable vote share of 17.02 per cent. This was the party's best performance in the state till date. The party received 86,92,297 votes in Bengal and won 2 Lok Sabha seats namely Asansol and Darjeeling. The party came second in Maldaha Dakshin, Kolkata Uttar and Kolkata Dakshin.

What was the result of West Bengal Assembly Elections in 2016?

The Congress received 67,00,938 votes whereas the CPI-M got 1,08,02,058 votes. The BJP was able to get 55,55,134 votes with a vote share of 10.16 per cent. The party won 3 seats in the Assembly. Its partner Gorkha Janmukti Morcha (GJM) also won 3 seats. The saffron party received a jolt in the Assembly elections as it fared badly as compared to its performance in the 2014 Lok Sabha polls. In 2011, the Trinamool Congress and the Congress was in an alliance and won the elections. Mamata's strategic alliance with the Congress after Nandigram violence and Tata Nano Singur controversy paid rich dividends for her and the alliance won 227 seats (Trinamool: 184, Congress: 44 and SUCI: 1) in the Assembly. Mamata's victory ended the 34-year-long rule of the Left Front government in West Bengal.

What is the current scenario in West Bengal in 2019?
The 2019 polls will see a direct and fiery battle between Mamata Banerjee on the one side and the BJP on the other. The Left Front and the Congress are fighting for their survival in the state as the BJP has taken the number two spot in the state. All the bypolls and rural polls have indicated this trend. The BJP came second in Uluberia, Cooch Behar Lok Sabha and Noapara, Kanthi South Assembly bypolls. BJP president Amit Shah has claimed the BJP will win 22 out of the 42 Lok Sabha seats from West Bengal. Mamata Banerjee is gradually becoming an important player and can be one of the strongest prime ministerial candidates in case of a fractured mandate in 2019.

The Mamata vs CBI standoff and her support for Kolkata Police Commissioner Rajeev Kumar recently is yet another evidence of the acrimony between West Bengal Chief Minister Mamata Banerjee and Prime Minister Narendra Modi. (File photo: PTI)

Several opposition parties are revolving around her and her massive rally in Kolkata, in which more than 20 opposition leaders took part, proved that point. The Mamata vs CBI standoff and her support for Kolkata Police Commissioner Rajeev Kumar recently is yet another evidence of the acrimony between the West Bengal chief minister and the prime minister. However, the Mamata government is under fire over several chit fund scams in the state. The idea of Grand Alliance in the state has only a few takers as the Congress and Left leaders have been continuously accusing the Trinamool government of looting money of investors. Congress leader Adhir Ranjan Chowdhury alleged that the Trinamool Congress looted the people of the state.

Meanwhile, all parties in the state are trying to poach several leaders from other parties in order to weaken their opposition. Congress MP from Maldaha Uttar Mausam Noor and CPI(M) legislators Abdur Razzak Mandal and Kanai Mondal have recently joined the Trinamool Congress. In 2018, BJP leader Chandan Mitra and Congress MLAs Samar Mukherjee, Abu Taher, Sabina Yasmin and Akhruzzman joined the ruling Trinamool in presence of Mamata Banerjee. Meanwhile, there were murmurs of discontent in the Trinamool Congress too and Saumitra Khan, one of its sitting MPs from Bishnupur, recently joined the BJP. Another MP Anupam Hazra was also expelled by the party recently. In 2017, Mamata Banerjee's close aide Mukul Roy joined the BJP and is now heading the party's poll campaign in the state.

What is News Nation Opinion Poll verdict in West Bengal?
According to News Nation Opinion Poll, the Trinamool Congress is likely to get 36 per cent of the vote share in the upcoming Lok Sabha polls in 2019. The BJP may get 23 per cent of votes, while the Congress and the Left Front are likely to secure 7 per cent and 26 per cent of the vote share respectively. The Trinamool Congress is projected to win 31 seats and the BJP can win 7 seats in 2019. So, the Trinamool is likely to lose 3 seats and the BJP may gain 5 seats in the upcoming Lok Sabha polls in West Bengal. Both the Left Front and the Congress are likely to get 2 seats each. The poll clearly indicated that the Mamata-led party is still in command in the state and the BJP is making some serious inroads. 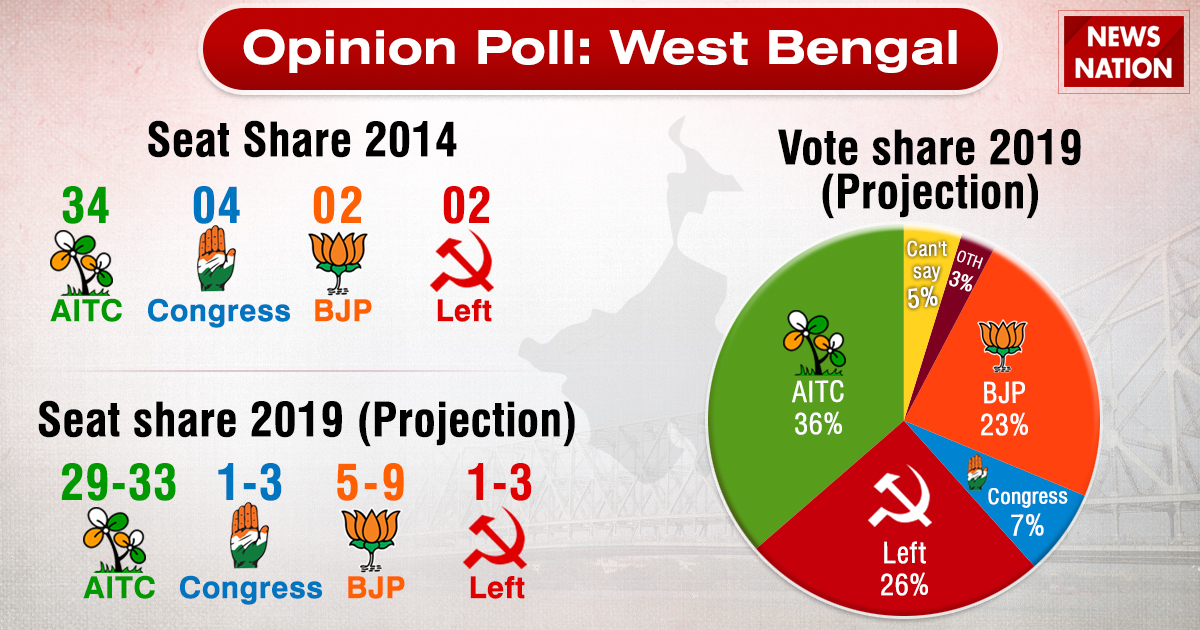 Prime Minister Narendra Modi has a good lead over Congress chief Rahul Gandhi in West Bengal when the respondents were asked about their favourite Prime Ministerial candidate in 2019. Modi got the backing of 31 per cent people, while only 17 per cent chose Rahul Gandhi.