Sumitra Mahajan announces she will not contest Lok Sabha elections

Mahajan Will Turn 76 Next Week And There Were Speculations That The BJP Will Not Field Her From Indore Given Her Age.

The BJP had an undeclared rule of not offering any ministerial post to its MPs above the age of 75 with many in the saffron party advocating for not giving tickets to those who crossed the age bar. Mahajan will turn 76 next week and there were speculations that the BJP will not field her from Indore given her age.

Earlier on Tuesday, Mahajan had said that the saffron party was fielding her from Indore on its own and that she hadn't sought ticket from the constituency for last three decades. 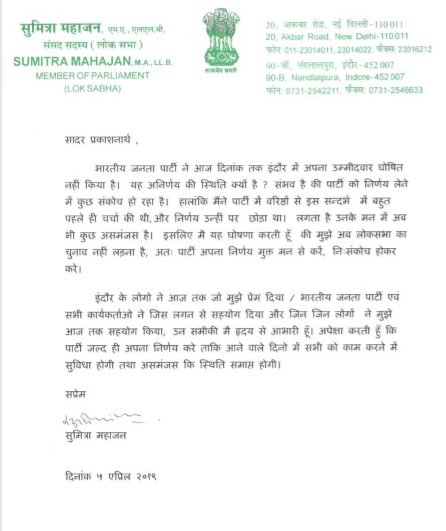 "I did not seek ticket from the Indore seat in 1989 when I first contested the Lok Sabha elections. The party on its own made me its candidate. I have never demanded my nomination," Mahajan said.

When asked about the delay in announcing the candidate for Indore, industrial hub the largest city of Madhya Pradesh, the BJP leader said, "Possibly, BJP organisation leaders have something on their mind. I cannot say anything until the BJP organisation speaks out."

The BJP has not fielded many of its veteran leaders, including former presidents LK Advani and Murli Manohar Joshi, in the Lok Sabha elections. Advani (91) and Joshi (85) were not renominated from their Lok Sabha seats, Gandhinagar and Kanpur, respectively. Advani has been replaced with BJP chief Amit Shah.