Priya Dutt Has Been Given The Ticket From Mumbai North Central, While Milind Deora Will Contest From Mumbai South Seat.

The Congress on Wednesday released the second list of 21 candidates, including 16 from Uttar Pradesh and five from Maharashtra, for the Lok Sabha elections 2019. Senior party leader Raj Babbar will contest from Moradabad, while Sushil Kumar Shinde returned to fight from Sholapur seat. Former Congress MP Priya Dutt has been given the ticket from Mumbai North Central, while Milind Deora will contest from Mumbai South seat.

Dutt had earlier written to Congress president Rahul Gandhi against contesting elections. “I am in the race. I am fighting this election. I am fighting for the future of my children. It is a fight to save our democracy,” ANI quoted her as saying earlier in the day.

Babbar had won against Dimple Yadav, the wife of Samajwadi Party chief Akhilesh Yadav in the by-election to the Firozabad seat in 2009. But in the 2014 general elections, he lost to VK Singh from Ghaziabad.

The Congress party had declared its first list on March 7 in which it had announced that UPA chairperson Sonia Gandhi will contest from Raebareli and party president Rahul Gandhi will fight the polls from Amethi. Former Union ministers Salman Khurshid, Jitin Prasad and RPN Singh were also named in the first list from their traditional seats of Farrukhabad, Dhaurahra and Kushi Nagar, respectively. 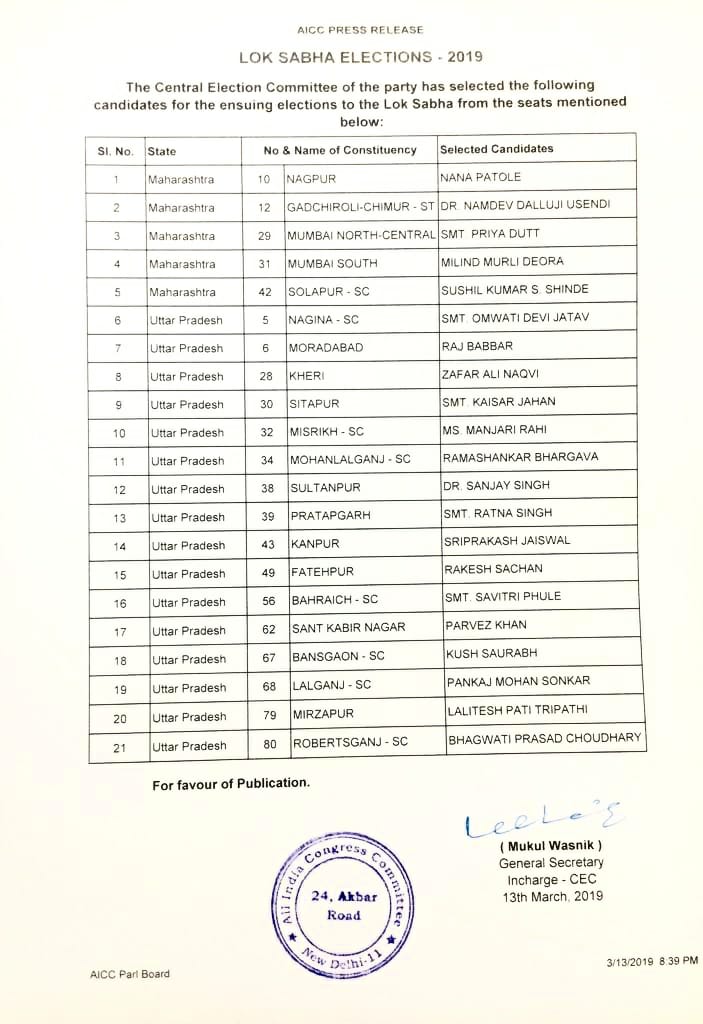 In UP, the Congress has fielded several former MPs in the list, who can potentially damage the prospects of the SP-BSP alliance in the state. Of the 16 candidates from UP, six are former MPs. Zafar Ali Naqvi will contest from Kheri, Kaisar Jahan from Sitapur and Ratna Singh from Pratapgarh. The Congress has also named former BJP MP Savitri Bai Phule from the reserved seat of Bahraich and former Samajwadi Party leader Rakesh Sachan from Fatehpur. Both Phule and Sachan had joined the Congress earlier this month. Lalitesh Pati Tripathi, a young leader seen as close to Priyanka Gandhi Vadra, is contesting from Mirzapur.