Alongwith This, Ms Bhavana Jha, MLA Benipatti, Has Also Been Suspended From The Congress Party For Anti-party Activities With Regards To The Ongoing General Elections, The Congress Said In A Statement.

The Congress on Sunday suspended its former MP Shakeel Ahmad with immediate effect for contesting the Lok Sabha elections from Bihar's Madhubani constituency as an independent candidate. "Alongwith this, Ms Bhavana Jha, MLA Benipatti, has also been suspended from the Congress Party for anti-party activities with regards to the ongoing General Elections," the Congress said in a statement. 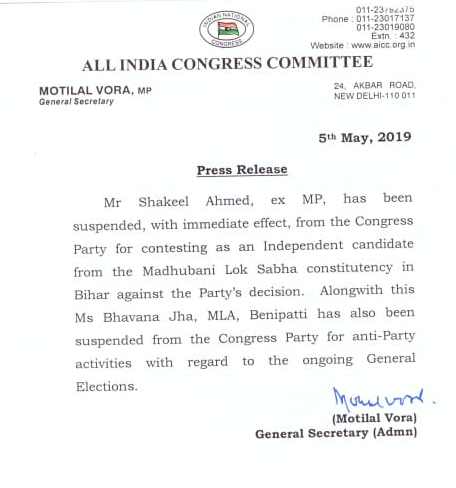 Shakeel Ahmad, a former Union minister who has represented Madhubani in the Lok Sabha, had filed his nomination papers in two sets as a Congress candidate and as an Independent. He withdrew the former after the party declined his request for allotting the party symbol.

On Wednesday, the CPI announced its support to Shakeel Ahmed, a move that may queer the pitch for the Mahagathbandhan which seeks to wrest the seat from the BJP. The CPI state council made the announcement in a release, stating it was committed to defeat the BJP and its allies and form "a government that could provide a secular, progressive and democratic alternative".

Ahmad was unhappy after his traditional seat of Madhubani went to ally Vikassheel Insaan Party (VIP) under a seat sharing formula of the Grand Alliance.

Ahmad earlier pointed out that a Rashtriya Janata Dal (RJD) supported candidate was contesting against Congress candidate Ranjit Ranjan in Supaul. "If the RJD can support a candidate against an official Congress candidate, then why can't the Congress do the same in Madhubani?" he said.

The Mahagathbandhan (grand alliance) has fielded Badrinath Purve, a former RJD leader who is the candidate of the fledgling Vikassheel Insaan Party (VIP), while BJP MP Hukum Dev Narayan Yadavs son Ashok Yadav seeks to retain the seat for the NDA.