The Issue Comes Days After Railways Was Found In Violation Of The MCC When It Was Found To Be Issuing Tickets With PM Narendra Modi's Pictures.

The Election Commission of India on Tuesday expressed its "serious" displeasure to the Ministry of Civil Aviation and the Ministry of Railways over the non-compliance of its lawful instructions on the use of paper tea cups with "Main Bhi Chowkidar" slogan even after the Model Code of Conduct (MCC) came into effect on March 10. On March 29, the EC sent notices to the Ministries, asking to explain the prima facie violation of the model code of conduct by the same day itself. In addition, the poll body directed them to explain the person responsible for it.

On March 27, the Ministries were also served a show cause notice over using Prime Minister Narendra Modi's photographs on railway tickets and Air India boarding passes in violation of poll conduct.

"The Commission expresses its serious displeasure over the non-compliance of the Commission's lawful instructions and lackadaisical approach towards enforcing the Model Code of Conduct," EC writes in its letter to Secretary, Ministry of Civil Aviation and Chairman, Railway Board. It has further directed that action taken against the officer-in-charge be reported to the Commission within a week. 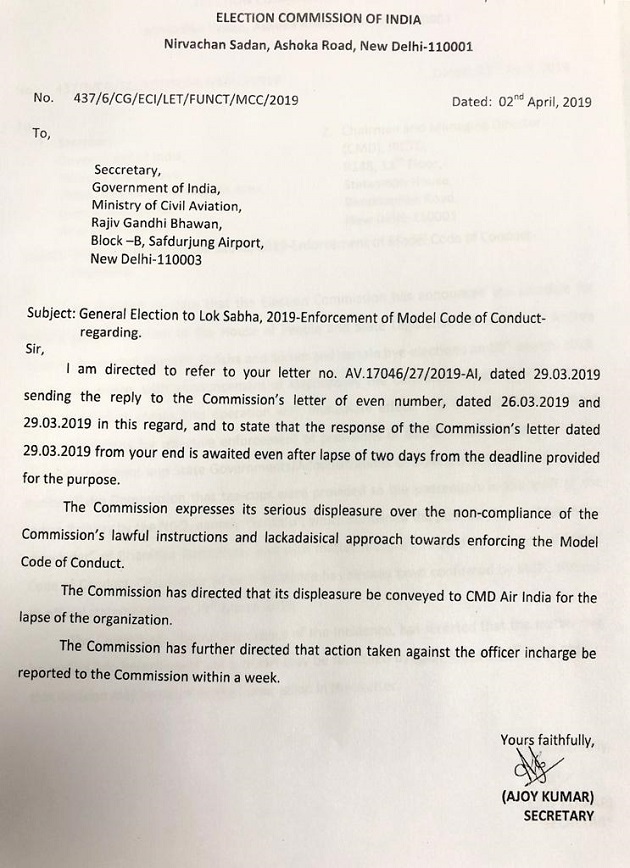 The issue came to light after a passenger on the Shatabdi train on March 29 tweeted an image of the paper cup with the slogan that was earlier launched by the Bharatiya Janata Party (BJP) ahead of the 2019 Lok Sabha polls. The particular cup, carrying an advertisement by the Sankalp Foundation, was reportedly used to serve tea twice.

On this, the IRCTC said the matter has been investigated and it was without any prior approval of the Railways. "An explanation has been sought from Supervisor/Pantry Incharges over lack of devotion to duty. Rs 1 lakh fine has been imposed on the service provider. Show cause notice has also been served to the service provider for this misconduct," the IRCTC added.

Prime Minister Narendra Modi had on March 16, launched the "Main Bhi Chowkidar" and all the BJP leaders followed suit in a counter-campaign against Rahul Gandhi-led Congress party's "Chowkidar Chor Hain".