2019 Lok Sabha Election Analysis: What happened in Himachal Pradesh in 2014 polls? What will happen this year?

Lok Sabha Elections 2019: The Election Commission of India (ECI) has finally sounded the poll bugle and declared the schedule for the Lok Sabha Elections 2019 on March 10. The Lok Sabha Elections 2019 will be held in seven phases, starting from April 11. The results will be declared on May 23. 91 constituencies will go for polls in the first phase on April 11, followed by 97 constituencies in the second phase on April 18. The third phase will be held on April 23 and fourth on April 29, fifth on May 6, sixth on May 12 and seventh phase on May 19. 115 constituencies will go for polls in the third phase, 71 in the fourth phase, 51 in the fifth phase, 59 in the sixth phase and 59 in the seventh phase. We are also gearing up for the elections and are coming up with a series: 2019 Lok Sabha Election Analysis: What happened in 2014 Lok Sabha Polls? What will happen this year? Let us look at the political scenario in the state of Himachal Pradesh. The BJP made a comeback in the state in 2017 and defeated the ruling Congress. Party's Jairam Thakur became the chief minister after its chief ministerial face Prem Kumar Dhumal lost the Assembly elections. Dhumal was a two-time chief minister. In 2014 Lok Sabha polls, the BJP swept the state due to 'Modi Wave' and it continued its success in 2017 also. The state is famous for its 'Yo-Yo Politics' and shifts between the Congress and the BJP after every five years. Before 2017 polls, the BJP emerged victorious in 1990, 1998 and 2007 Assembly polls whereas the Congress was successful in 1993, 2003 and 2012 Assembly polls. Congress leader Virbhadra Singh was the chief minister of the state from 1983 to 1985, 1985 to 1990, 1993 to 1998, 2003 to 2007 and again from 2012 to 2017. BJP's Prem Kumar Dhumal was the chief minister of the state from 1998 to 2003 and again from 2007 to 2012. Shanta Kumar was the first BJP chief minister of the state in 1990. He also remained the chief minister between the period of 1977 and 1980 but as a member of the Janata Party. Let's discuss state politics in detail. Also Read: Lok Sabha Elections 2019: When will you vote? Know poll dates of your seat here

Himachal Pradesh will vote in a single phase on May 19. Polling will be held on Shimla, Kangra, Mandi and Hamirpur seats in the seventh and last phase.

What happened in Himachal Pradesh in 2014 Lok Sabha Elections? 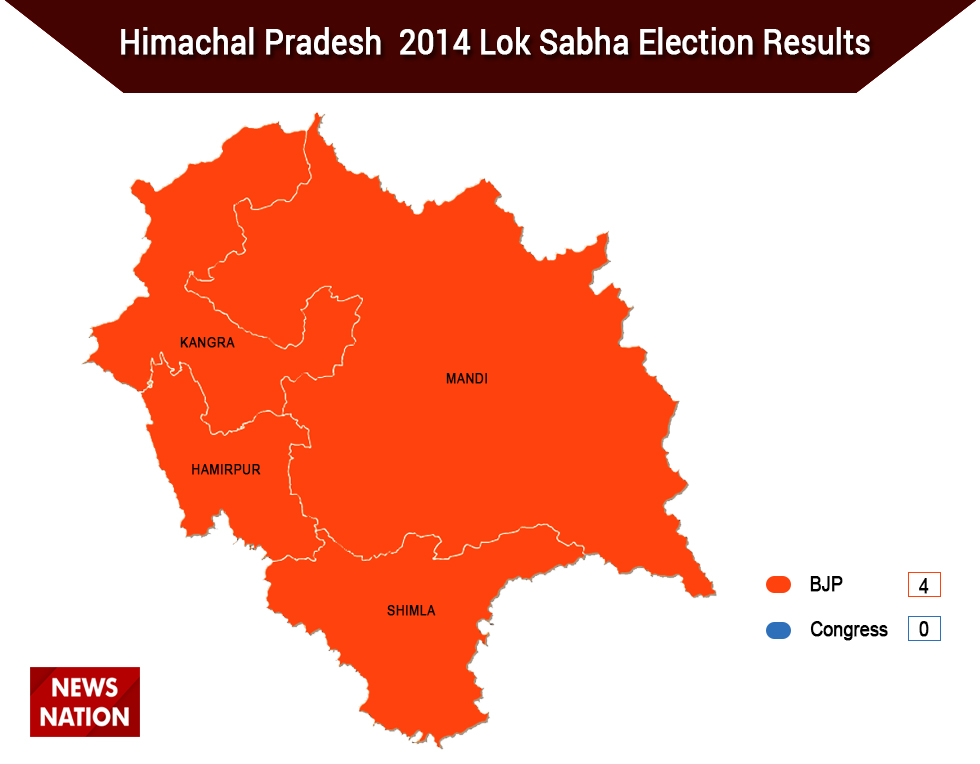 In 2014 Lok Sabha polls, the BJP swept the state and won all the 4 seats in Himachal Pradesh. The BJP received 16,52,995 votes with a vote share of 53.8 per cent. The Congress drew a blank in the state and received 12,60,477 votes with a vote share of 41 per cent. BJP's Shanta Kumar defeated Congress candidate Chander Kumar in Kangra by over 1,70,000 votes. In Hamirpur constituency, Prem Kumar Dhumal's son Anurag Singh Thakur defeated Congress leader Rajinder Singh Rana by over 98,000 votes. BJP's Virender Kashyap defeated Congress candidate Mohan Lal Brakta by over 84,000 votes in Shimla. In Mandi, which is considered to be the stronghold of Virbhadra Singh, BJP leader Ram Swaroop Sharma defeated Singh's wife Pratibha Singh by over 39,000 votes.

The Congress was reduced to 21 seats in the state with a vote share of 41.6 per cent. The party received 15,77,450 votes in the state. However, BJP's chief ministerial face Prem Kumar Dhumal lost the elections from Sujanpur Assembly seat. In 2012 Assembly polls, the Congress won 36 seats whereas the BJP was successful in 26 seats.

What is the current scenario in Himachal Pradesh in 2019?
The politics in Himachal Pradesh has been revolving around the Congress and the BJP over the years. The BJP is looking forward to winning all the four seats in the state again while the Congress will try to stop the BJP to make a sweep once again. In 1996 Lok Sabha polls, the Congress had won all the seats in the state. The Congress has already begun its preparations for the upcoming elections. The party will invite application from aspirants for the four Lok Sabha seats in the state. Former chief minister Virbhadra Singh is likely to be the head of the election committee and several leaders such as Vinod Sultanpuri, Dhani Ram Shandil, Vikramaditya Singh and Kaul Singh Thakur are the contenders for a Lok Sabha ticket.

The BJP has won the Hamirpur Lok Sabha seat 9 times barring 1996 when it lost the seat to the Congress. Kangra is considered to be a stronghold of Shanta Kumar. He has won the seat four times in 1989, 1998, 1999 and again in 2014. The politics in Mandi has been dominated by Virbhadra Singh, Sukh Ram and BJP's Maheshwar Singh as all of them won the seat thrice. Shimla has been the fiefdom of the Congress party but it lost the seat in 2009 and 2014. There is no third force in the state and the battle will be fought between the two national parties in Himachal Pradesh.

What is News Nation Opinion Poll verdict in Himachal Pradesh?
According to News Nation Opinion Poll, the BJP is likely to get 41 per cent of vote share in the upcoming Lok Sabha polls. The Congress may get 35 per cent of votes, predicts the poll. The BJP may win 3 seats, the Congress can win 1 seat in 2019. So, the BJP is projected to lose a seat in the upcoming Lok Sabha polls in Himachal. According to the poll, the Congress can open its account this time in the state. 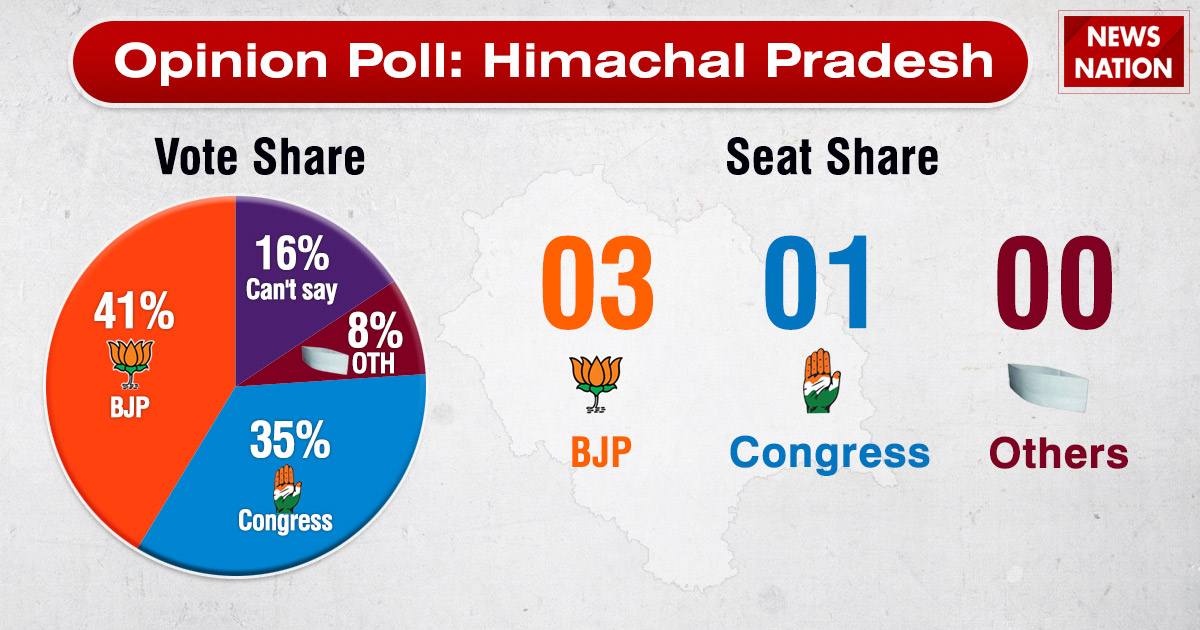 Prime Minister Narendra Modi has a double-digit lead over Congress chief Rahul Gandhi in Himachal Pradesh when the respondents were asked about their favourite Prime Ministerial candidate in 2019. Modi got the backing of 47 per cent people, while only 35 per cent chose Rahul Gandhi.