General Elections To 6 Parliamentary Seats In Jammu And Kashmir Will Take Place In Five Phases On April 11, 18, 23, 29 And May 6.

What if the Lok Sabha polls were held today in Jammu and Kashmir? Who would be the top choice for Prime Minister's post in the state? What will be the major factors that will dominate the Lok Sabha Elections starting April 11? To get an idea of people's mood in the militancy-hit state, we travelled across all the 6 parliamentary constituencies and tried to find out who has the better chance to steal the show in the upcoming Lok Sabha Elections 2019.

Going by the News Nation Opinion Poll, the BJP is predicted to get 26 per cent votes while the Congress may bag 24 per cent of the total share followed by the Farooq Abdullah-led National Conference and Mehbooba Mufti's PDP which are likely to get 19 and 13 per cent votes respectively in the state.

As far as the seat share is concerned, the BJP, Congress and NC are likely to win 2 seats each. In what could be a big blow to former chief minister Mehbooba Mufti, the PDP won't be able to manage win in a single seat in Jammu and Kashmir. 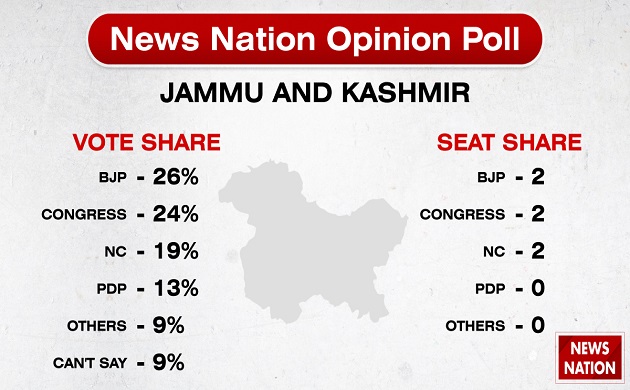 In the 2014 Lok Sabha polls, both the BJP and PDP won 3 seats each. The National Conference was not able to open its account in the state and the Congress also drew a blank.

Talking about the 2014 Jammu and Kashmir Assembly polls, the PDP had won 28 seats and emerged as the single largest party. The BJP also performed well in the elections and won 25 seats. Later, both parties came together to form the government in the state.

Last year in November, the political temperature in Jammu and Kashmir suddenly went up after Governor Satya Pal Malik dissolved the state assembly amid dual claims on government formation from PDP-NC-Congress combine and BJP-backed Sajad Lone who heads Peoples’ Conference. The dissolution of the state assembly has necessitated fresh elections in the state.

Though several political parties pitched for simultaneous Lok Sabha and Assembly elections in the state, the Election Commission of India decided to conduct the Jammu and Kashmir Assembly polls later in the year keeping in mind the prevailing security conditions in the state followed by February 14 Pulwama terror attack which left 42 CRPF personnel dead and dozens of others injured.

General Elections to 6 Lok Sabha seats in Jammu and Kashmir will take place in five phases on April 11, 18, 23, 29 and May 6. The counting of votes for all phases will be taken up on May 23.