Out Of The 40 Lok Sabha Seats In Bihar, Polling Would Be Held In 31 Constituencies In Phases Three To Seven Between April 23 And May 19.

The 'mahagathbandhan' (grand alliance) in Bihar on Friday announced the seats to be contested by each of the alliance partners -- the RJD, Congress, RLSP, HAM and VIP -- in phases three to seven of the general elections. Out of the 40 Lok Sabha seats in Bihar, polling would be held in 31 constituencies in phases three to seven between April 23 and May 19.

Announcing the seat-sharing arrangement at a press conference here, RJD leader Tejashwi Yadav also declared the name of his party's candidates and said that no nominee would be fielded by the alliance in Ara to help the CPI(ML) Liberation. He said the candidate for Sheohar seat "will be decided in two-three days".

Senior leaders of the Congress were conspicuous by their absence at the press conference. Yadav also said his party would contest the Darbhanga seat, which has emerged as a bone of contention between the RJD and the Congress with the latter insisting on having the seat as it wanted to field sitting MP Kirti Azad, who had recently joined the party after quitting the BJP. Senior RJD leader Abdul Bari Siddiqui would fight from Darbhanga. 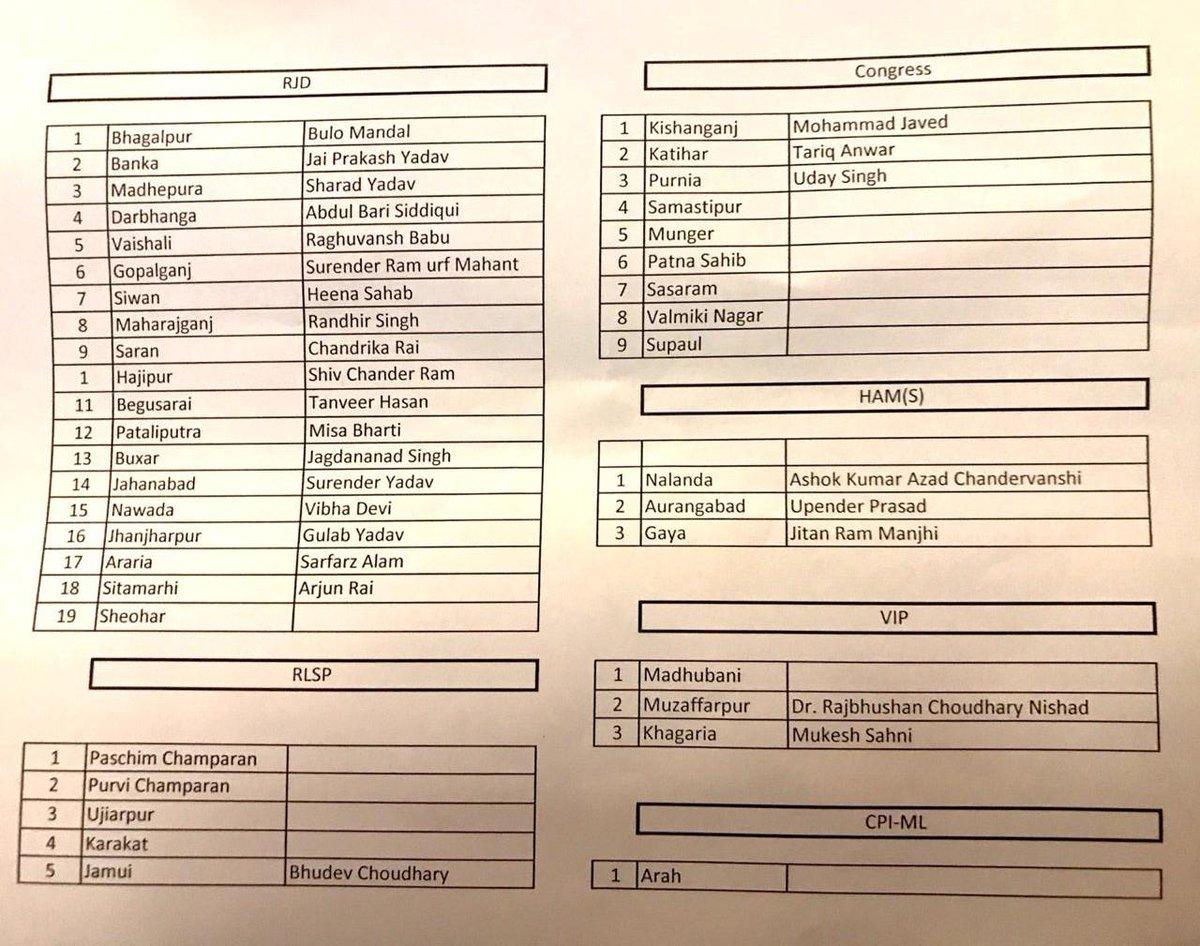 Among the other prominent RJD candidates, Lalu Prasad's eldest daughter Misa Bharti would contest from Pataliputra, which she had lost to her father's former loyalist-turned-BJP leader Ram Kripal Yadav in 2014. Chandrika Rai the father of Tej Pratap Yadav's estranged wife Aishwarya, will be fight from Saran.

Tejashwi also claimed that the Congress, which was represented at the press conference by former MLC Narendra Kumar Singh, had cleared the names of some of its candidates which included sitting MP from Supaul Ranjeet Ranjan and former Lok Sabha speaker Meira Kumar who would try her luck from Sasaram. Meira Kumar have been contesting from her Sasaram parliamentary constituency for many years but had lost in the 2014 Lok Sabha polls.