I Would Be Addressing The Nation At Around 11:45 AM - 12.00 Noon With An Important Message. Do Watch The Address On Television, Radio Or Social Media, PM Modi Tweeted.

Prime Minister Narendra Modi on Wednesday announced that India had demonstrated anti-satellite missile capability by shooting down a live satellite, describing it as a rare achievement that puts the country in an exclusive club of space super powers. "In the journey of every nation there are moments that bring utmost pride and have a historic impact on generations to come. One such moment is today," he said in an unprecedented broadcast to the nation on television, radio and social media. "India has successfully tested the Anti-Satellite (ASAT) Missile. Congratulations to everyone on the success of #MissionShakti," the prime minister tweeted later.

"The A-SAT process started in 2014 after PM Modi gave permission and now it's a huge achievement. Not only we have become space power but we are now in big four. We should not forget that tomorrow's wars will not be the same as yesterday's wars. So our preparedness is our biggest deterrent," says Finance Minister Arun Jaitley. 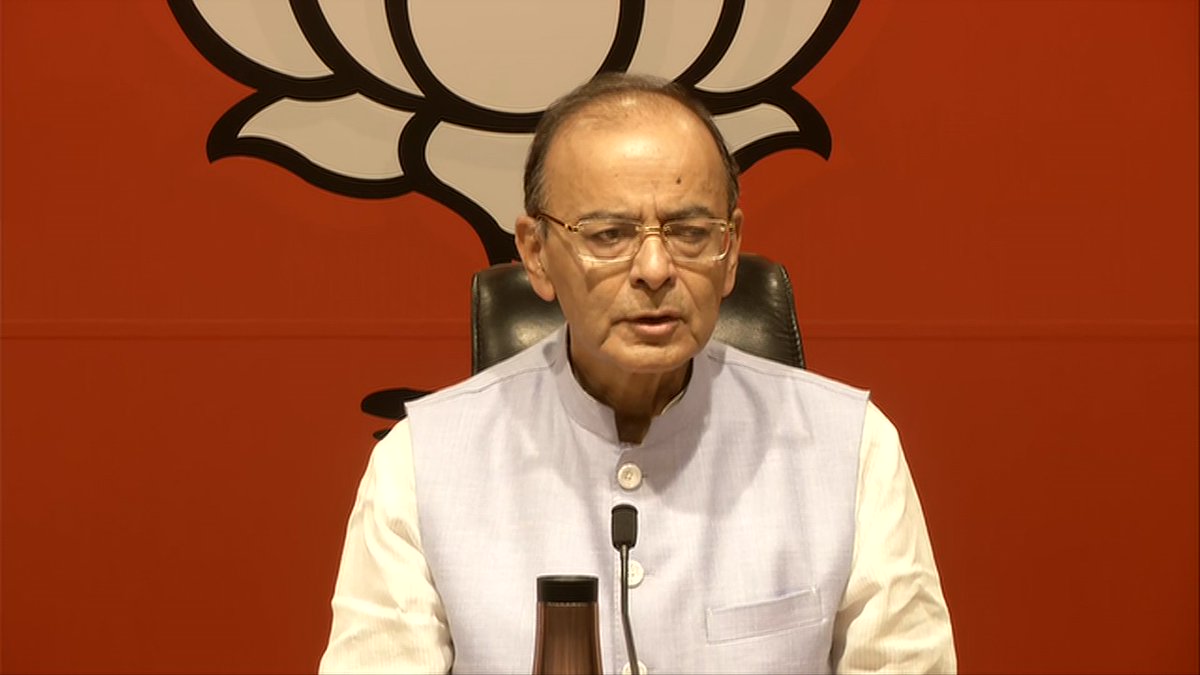 Arun Jaitley accused the then Congress-UPA government for "dilly-dallying" in giving giving their approval to scientists to go ahead with Mission Shakti. "Our scientists had this capability for a long time but the then government never gave them a go ahead. I want to remind some of my friends from the Congress that when Agni V was launched, the DRCO had said that they have the capability to develop an A-SAT missile," Jaitley said.

National security prevails over every other consideration, says Jaitley.

"Today is a historic day for our country. Our scientists have achieved a feat that previously only three other nations had. We successfully launched an A-SAT missile and this increases our defence capability. India is now only the fourth country enabled to shoot down a satellite," said Finance Minister Arun Jaitley.

#MissionShakti represents a watershed moment for India. Testing of the Anti-Satellite Missile demonstrates India's scientific prowess and commitment to harnessing space technology for the security and empowerment of our people. My congratulations to all concerned #PresidentKovind

Tremendous achievement by Namo Govt. It has thrown Pakistan electronic guidance of their jet fighter into blindness. Even Pak airforce jets flying over Pak territory can be shot down by blinded Pak radars. Congratulation to Namo’s l

Congratulations once again to DRDO & entire scientific community in achieving yet another milestone by successfully testing ASAT technology.

Congratulations to @isro & @DRDO_India on this path breaking achievement.

I would also like to wish the PM a very happy World Theatre Day.

India’s Mission Programme is world-class for many many years.
We are always proud of our scientists, @DRDO_India , other research & space organisations. 1/4

Congratulations to you too Sir on the success of #MissionShakti.

A proud moment for India as we enter our name as an elite space power today.â°
Our scientists have achieved a great feat by carrying out #MissionShakti in under three minutes. Congratulating @isro and @DRDO_India for this remarkable accomplishment.

With #MissionShakti, India has registered its presence among the elite space powers.

A-SAT, an anti-satellite weapon, which successfully targeted a live satellite on a low earth orbit, is a giant leap in India’s national security.

India becomes an elite space power. Congratulations to our scientists and engineers for their indigenous efforts in successfully executing #MissionShakti. India continues to become stronger & secure under the leadership of @narendramodi ji! #NamumkinAbMumkinHai pic.twitter.com/oCJke5iEJm

Congratulations to scientists of #DRDO for the success of #MissionShakti and for making India as an elite space power. We are so proud of the achievements and efforts of DRDO towards strengthening the country’s security since its inception in 1958.
Jai Hind...

Compliment our Scientists on their successful launch of anti-satellite missile. We, as a nation, are proud of our Scientists. #MissionShakti #ASAT

Under the able leadership of PM @narendramodi, team @DRDO_India has achieved a remarkable & historic feat. I am feeling proud that #MissionShakti has been successfully conducted making India, the only 4th nation with capability to destroy low orbit satellite using A-SAT missile.

A defining moment for our Nation!#MissionShakti is a hallmark of our scientific aptitude & commitment to national security.

Congratulations to PM @narendramodi ji, our scientists & citizens as India joins the power league of Nations having Anti-Satellite (ASAT) Missile.

This is a historic day for the nation, I congratulate the DRDO and ISRO scientists: Union Minister Ravi Shankar Prasad.

The vision of our PM @narendramodi ji is translated to reality by @DRDO_India and our scientists with the successful launch #MissionShakti. This is a proud moment of every Indian as our nation embark on a new era of space research and technology!

We congratulate @isro & the Govt on the latest achievement for India. The Indian Space Programme established in 1961 by Pt. Jawaharlal Nehru & the Indian Space Research Organisation set up under Smt. Indira Gandhi has always made India proud with its ground breaking achievements.

Former DRDO Chief and NITI Aayog member Dr VK Saraswat to ANI on anti-satellite weapon A-SAT: This is a fantastic capability to have and it gives us a deterrence in case our adversaries try to militarise the space or try to prevent us from using our existing space capabilities.

Congratulations to DRDO India and ISRO scientists on the success of ‘Mission Shakti’. The success of this mission will help in strengthening India’s defence capabilities. We are proud that our Space and Defence program has touched unprecedented heights with this glorious achievement, says Home Minister Rajnath Singh.

Another extremely proud moment for India under the leadership of PM Shri @NarendraModi ji. India has entered its name as an elite space power. It has become only the fourth nation after USA, China and Russia to achieve this distinction. /1

The successful execution of #MissionShakti is a proud, powerful, historical moment for us.

Under the visionary leadership of PM @narendramodi ji, today we have become a formidable space power with proven Anti-Satellite Missile capability

Many congrats @DRDO_India & all Indians!

Today @narendramodi got himself an hour of free TV & divert nation's attention away from issues on ground — #Unemployment #RuralCrisis & #WomensSecurity — by pointing at the sky.

Congratulations @drdo_india & @isro — this success belongs to you. Thank you for making India safer.

Congratulations to all the scientists for carrying out "Mission Shakti" successfully. India is moving fast towards becoming a world leader, & under PM Modi's leadership, it is on its way to not only become a 'super economic power', but also a 'super science power', says Union Minister Nitin Gadkari.

The UPA government had initiated the ASAT program which has reached fruition today I congratulate our space scientists & the visionary leadership of Dr Manmohan Singh, tweets Congress leader Ahmed Patel.

#MissionShakti is special for 2 reasons:
(1) India is only the 4th country to acquire such a specialised & modern capability.
(2) Entire effort is indigenous.
India stands tall as a space power!
It will make India stronger, even more secure and will further peace and harmony.

#MissionShakti was a highly complex one, conducted at extremely high speed with remarkable precision. It shows the remarkable dexterity of India’s outstanding scientists and the success of our space programme.

In the journey of every nation there are moments that bring utmost pride and have a historic impact on generations to come.

One such moment is today.

India has successfully tested the Anti-Satellite (ASAT) Missile. Congratulations to everyone on the success of #MissionShakti.

#PMAddressToNation | What we have done is not against anyone. It speaks of the country's technological prowess. India has always been against the use of weapons in space: PM @narendramodi

India has entered its name as an elite space power. An anti-satellite weapon A-SAT, successfully targeted a live satellite on a low earth orbit . #missionShakti

We have always been against weapons in outer space and there is no change in this. Today's action does not violate any international law or bilateral agreement: PM Modi

'Mission Shakti' operation was a difficult target to achieve which was completed successfully within three minutes of launch: PM Modi.

To make positive changes in the lives of the people, we will have to adopt new changes: PM Modi.

It’s a matter of pride for all of us that it has been done by indigenously developed technology. I congratulate the scientists of DRDO, says PM Modi.

The mission was completed in just 3 minutes using an ASAT Made In India: PM Modi

Our aim is to maintain peace and to create war like situation: PM Modi.

Today, India has registered its name among the greats of the space race: PM Modi.

India is proud of its scientists, says PM Modi.

India has entered its name as an elite space power. An anti-satellite weapon A-SAT, successfully targeted a live satellite on a low earth orbit: PM Modi.

India has entered its name as an elite space power: PM Modi.

India has registered its name in the list of Space Power. America, Russia and China have achieved it till now. India is the 4th country.

Any moment now, PM Narendra Modi to begin his address to the Nation where he will deliver "an important message".

He’s declaring the results of the Lok Sabha elections. #JustSaying

What do you think PM @narendramodi will announce in his address to the nation?#NNBuzz pic.twitter.com/8IAMdiDXsI

PM Narendra Modi's address to the nation where he is to deliver "an important message."

PM Modi to begin his address to the nation any minute now.

Do watch the address on television, radio or social media.

Prime Minister Narendra Modi to address the nation shortly with an important message.