Track All The Latest News And Updates Related To The Lok Sabha Elections 2019 Here.

Prime Minister Narendra Modi will hold a road show and take part in the Ganga 'aarti' on Thursday, a day before he files his nomination papers from Varanasi. PM Modi to rallies in Darbhanga in Bihar and Banda in UP. BJP chief Amit Shah to address a rally in Uttar Pradesh. Mayawati, Akhilesh Yadav and Ajit Singh to address a joint rally in Kannauj. Priyanka Gandhi Vadra to hold a roadshow in Jhansi and Jalaun.

I can't say that our dreams for Kashi's development have all been fulfilled but the speed with which they are heading towards fulfillment has hastened: PM Modi.

I have only one mantra for every moment of my life - Rashtra Pratham, India First: PM Narendra Modi in Varanasi.

My caste certificate is being distribured, says PM Modi.

Opposition has a long face after three phases of polling; they know the outcome: PM Narendra Modi in Banda.

Kanhaiya Kumar, CPI LS candidate from Begusarai: I have full confidence that the people of Begusarai will vote on their issues and their issues are to build a university, a hospital, good roads, adequate water supply and fair price to farmers for their crops. 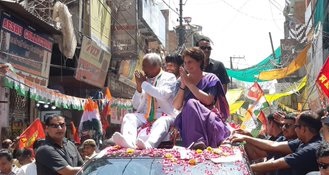 We will do anything to stop Modi-Shah duo. Will support any 'mahagathbandhan' government: Arvind Kejriwal.

GST will be simplified, 22 lakh government jobs will be given in 1 year if Congress is voted to power: Rahul Gandhi.

RJD's Patliputra candidate Misa Bharti filed her nomination. Talking to News Nation, mother Rabri Devi said, "Misa will win, no one can challenge her in Patliputra. Rabri Devi and brother Tej Pratap were present with her during filing of nomination. Rabri Devi was holding a photo of husband and RJD chief Lalu Prasad.

Madhusudan Tiwari to be the Congress candidate from Gorakhpur.

"Aren't National Security & Terrorism an issue to be talked about? But there are anti national who think it is not." Talking about the recent disastardly terror attacks in Sri Lanka, the PM adds, "More than 350 people lost their lives in the island nation, terrorists are operating in our neighbourhood, is this not an issue?" says PM Modi.

For the 'Mahamilavat' gang, national security may not be any issue. But this is new India. Those involved in orabetting terror would be chased to their homes and finished off, says PM Modi.

Some people have problems with slogans 'Bharat Mata Ki Jai' and 'Vande Mataram'. Should they not lose their deposits in elections? PM Modi says at rally in Darbhanga.

The party president will be addressing three election rallies in Ajmer, Jalore and Kota today. The constituencies that will go to the polls during the fourth phase are Tonk-Sawai Madhopur, Ajmer, Pali, Jodhpur, Barmer, Jalore, Udaipur, Banswara, Chittorgarh, Rajsamand, Bhilwara, Kota and Jhalawar-Baran.

Priyanka Gandhi Vadra to hold a roadshow in Jhansi and Jalaun.

Mayawati, Akhilesh Yadav and Ajit Singh to address a joint rally in Kannauj.

PM Modi to rallies in Darbhanga in Bihar and Banda in UP.

Prime Minister Narendra Modi will hold a road show and take part in the Ganga 'aarti' on Thursday, a day before he files his nomination papers from Varanasi. PM Modi is expected to be accompanied in his six-kilometere roadshow by the seniormost leaders, including Union ministers Sushma Swaraj, Nitin Gadkari, Piyush Goyal and Nirmala Sitharaman, besides BJP chief Amit Shah.