Lok Sabha Elections 2019: Here are the key seats and contestants to watch out for in Assam

Assam Went To Polls In The Aftermath Of The State-wide Protests Against The Citizenship Amendment Bill.

14 parliamentary constituencies in Assam, the most populated state in the entire North Eastern region, went to poll in the first three phases of the marathon Lok Sabha elections. While five constituencies each go to polls on April 11 and April 18, the remaining four constituencies witnessed polling on April 23. In 2019 General Elections, Assam has witnessed a direct contest between Congress and the ruling BJP. While the BJP came to power in 2016 Assembly elections in Assam, the Congress ruled the state for 15 long years under the chief ministership of Tarun Gogoi. The AIUDF led by perfume baron Badruddin Ajmal and the AGP, which are in alliance with the BJP, are the other players. Assam went to polls in the aftermath of the state-wide protests against the Citizenship Amendment Bill. While the BJP-led Centre withdrew tabling the Bill in the face of active resistance from the local population, the issue is expected to dominate the political discourse in the state.

As anxiety rises hours before the May 23 Lok Sabha verdict, let’s have a quick look at the key contests, seats and the prominent faces in the state.

Former Assam chief minister Tarun Gogoi's son Gaurav Gogoi will try to win the Kaliabor seat for the second consecutive time. In 2014, Gogoi won the seat by defeating his nearest rival of BJP's Mrinal Kumar Saikia by 93,874 votes. The seat has been a Congress stronghold as the party lost it only twice in 1984 and 1996. Tarun Gogoi represented the seat thrice in 1991, 1998 and 1999. AGP candidate Mani Madhab Mahanta will try to stop the Congress juggernaut with the BJP's backing. 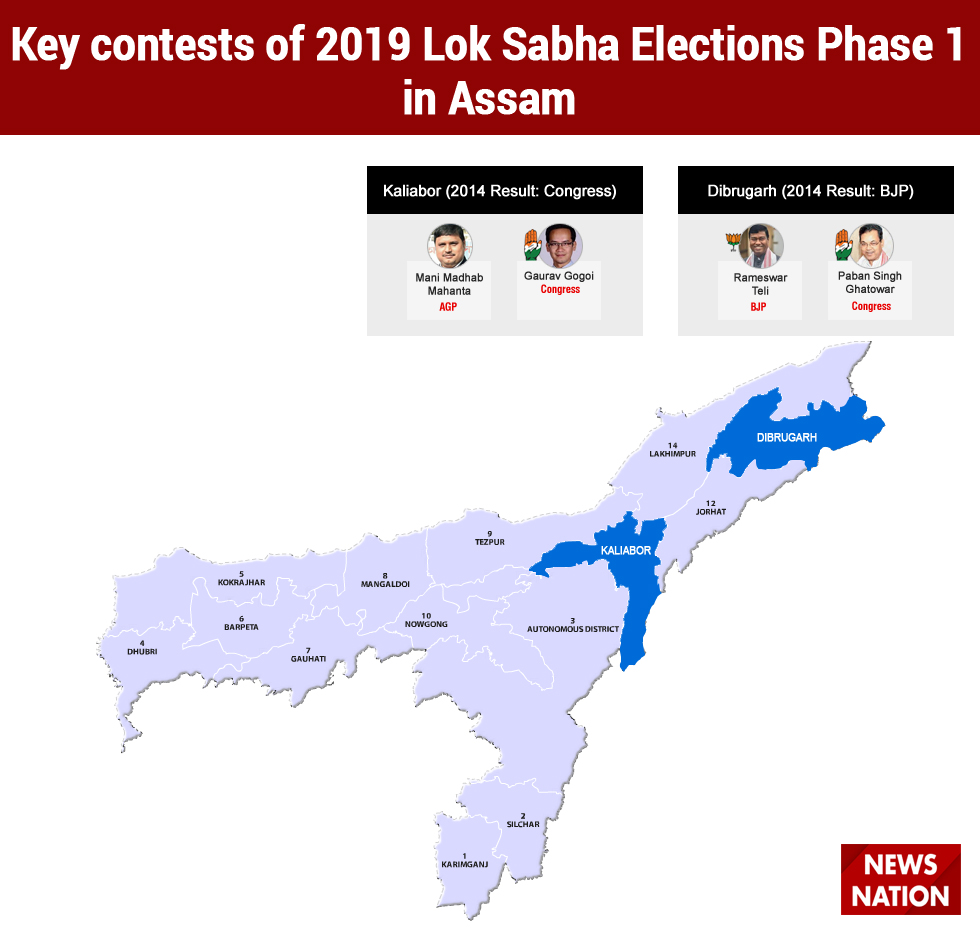 Dibrugarh will see a tough contest between the incumbent BJP MP Rameswar Teli and Congress candidate Paban Singh Ghatowar. Ghatowar has represented the constituency five times in 1991, 1996, 1998, 1999 and 2009. He lost the elections to Teli in 2014 by a big margin of 1,85,347 votes. Assam Chief Minister and BJP leader Sarbananda Sonowal also defeated Ghatowar in 2004 elections as an AGP candidate. The Congress has been winning the seat since 1951.

In 2014, Congress leader and party stalwart Santosh Mohan Dev's daughter Sushmita Dev won Silchar when she defeated BJP's Kabindra Purkayastha by a margin of over 35,000 votes. Sushmita is taking on BJP's Rajdeep Roy Bengali this time. Purkayastha won the seat for the saffron party thrice in 1991, 1998 and 2009 whereas Santosh Mohan dev represented the constituency five times in 1980, 1984, 1996, 1999 and 2004. 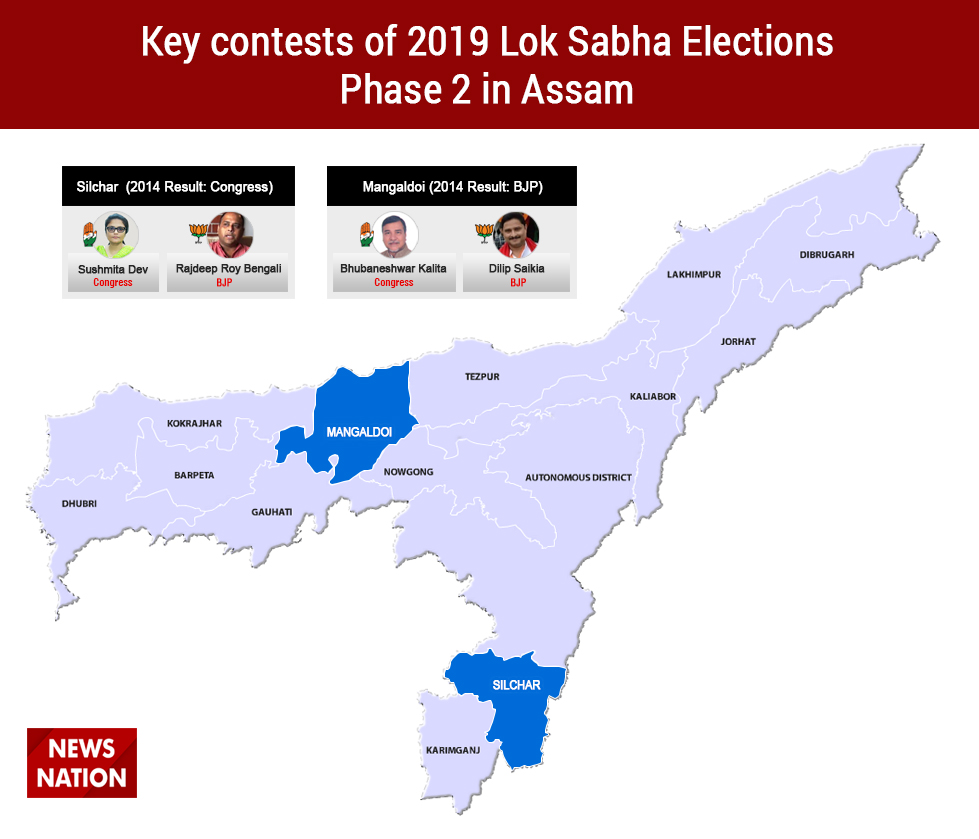 The BJP has fielded Dilip Saikia this time from Mangaldoi instead of its sitting MP Raman Deka. In 2014, Deka defeated Congress leader Kirip Chaliha by over 22,000 votes. Deka represented the seat twice in 2009 and 2014. In the last seven elections, both the BJP and the Congress won the seat three times each whereas the AGP won the seat once in 1996.

AIUDF's Badruddin Ajmal has been representing the seat since 2009 and is again in the fray. Congress leaders Nurul Islam and Abdul Hamid won the seat thrice each. In 2014, Ajmal defeated Congress leader Wazed Ali Choudhary by over 2,29,000 votes. 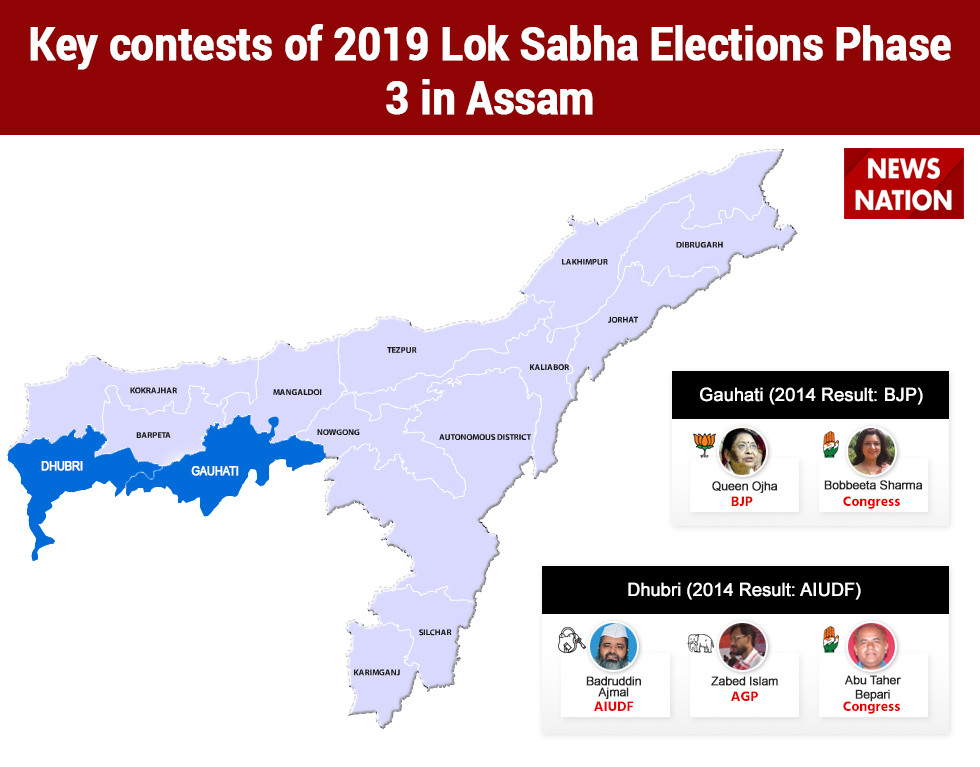 BJP's Bijoya Chakravarty represented the Gauhati Lok Sabha seat three times in 1999, 2009 and 2014. In 2014, she defeated Congress candidate Manash Borah with a huge margin of over 3,15,000 votes. The saffron party has decided to field Queen Ojha from the seat this time. Congress leader Kirip Chaliha represented the constituency twice in 1991 and 2004. The AGP was able to win it only once in 1996.